Get My Good Side 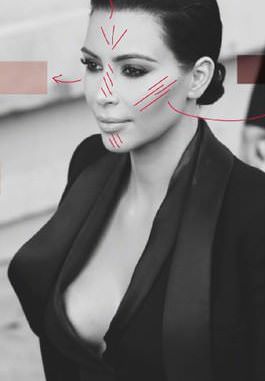 Can you change the features you're born with? Contouring says yep, you can. From skin care to surgery, here's everything you need to know.

So here I am...aged 30, dreading the inevitable arrival of forehead lines and crow’s feet, when along comes another – apparently far more pressing – issue to worry about: facial sculpting.

Now, I’m acutely aware that my jawline could be sleeker, my eyes wider and my cheekbones higher. I’ve never loved my round face, and for every photo I adopt my signature three-quarters on, head cocked pose. The ‘turtle, tuck, tilt’ method was passed on to me by an equally self-conscious friend, and involves sticking your neck out like a turtle to stop a double chin, tucking it down to make your jaw look sleeker, then tilting your head to give the camera your best angle. And it turns out we’re not alone: angles have now overtaken wrinkles as the number-one ageing concern for British women. We’re not only keen to improve the texture of our skin, but also the entire structure of it – bones and all.

Only a few years ago, contouring was just something that Kim Kardashian did with her hardcore, complicated-looking bronzing application techniques, but now it’s an entire industry. The re-sculpting craze is everywhere: in surgery, super-facials, make-up, state-of-the-art skincare, and even a worrying iPhone app called Facetune.

Having never had any cheekbones to speak of, I’m rather excited about this trend. Changing the angles of your face, enhancing your best features and playing down the dodgy ones – what’s not to love?

If you want true changes that last in the long term, you’re looking at the sharp end of a scalpel – but, crucially, without appearing like you’ve been anywhere near one.

‘There was a time when the face-lift was over-stretched and over-cushioned, but UK clients certainly don’t want others to know that they’ve had surgery,’ says Dr Julian De Silva, a facial cosmetic plastic surgeon based in London who champions the natural approach to facial augmentation (londonfacialplasticsurgery.co.uk). ‘I make people look natural. I’ve refused to do “cats’ eyes” – I just do the subtleties.’

So, can Dr De Silva give you cheekbones that look like you were born with them? ‘There’s a point in the cheek where if you give more curve and fullness, it will make any woman more beautiful,’ he says. ‘It’s the area towards the outside of cheek, about two thirds along. People don’t look at you directly straight on, or even side on; their line of vision is at a half-turn viewpoint, so volume there will be most effective.’ The cheek implants he refers to are high-grade silicone imported from California, which last a lifetime. There’s no scarring, either, because it’s done internally, creating tiny pockets in the roof of the mouth.

So prominent is facial sculpting right now that last year a seemingly niche treatment – the chin implant – was among the fastest growing surgical procedures in the UK. ‘It’s simple: recess chins make the face look weak,’ says Dr De Silva. ‘They’re usually because the bone hasn’t grown forward enough, so we use sculpted silicone that sits on the bone to bring it forward. Plus, small chins make noses look bigger – it’s all to do with bringing the face back into balance.’

Derm clients are also queuing up for fillers used in a different way. ‘Fillers are less about lines now, and are used in facial sculpting,’ says renowned cosmetic dermatologist Dr Adam Geyer, from Tribeca Park Dermatology in New York City. ‘It’s to do with rebalancing, rather than over-volumising, and my clients want to look refreshed. I use Sculptra, Juvederm Voluma and an injectable hyaluronic acid called Belotero on cheekbones and along the jawline, all of which last about a year.’

Surgery is one thing, but can the right skincare products actually change your face shape? Well, Estée Lauder suggests it can help with its New Dimension collection, developed to sculpt, support and strengthen every layer of the skin. In trials, the Shape + Fill Expert Serum (£62, esteelauder.co.uk) has proved it can increase natural collagen production by 294 per cent in just two days. I’ve been using it for 48 hours as I type, and I can detect that my skin looks a little plumper already.