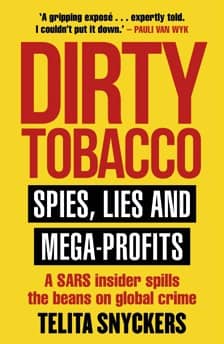 Spies, lies and mega-profits – it sounds like the tagline for the latest Grisham novel. Telita Snyckers talks about her new book, turning down a fat pay cheque and uncovering the underbelly of Big Tobacco.

Dirty Tobacco: Spies, Lies and Mega-Profits by Telita Snyckers is out now.

As a former smoker myself, I was hit hard by the recent ban on cigarettes. Like every other nicotine addict, I had stocked up just enough to ride out those first 21 days – which then became 35 days. Then, the second bombshell dropped: we had finally made it to Level 4, but cigarettes were still banned. Smokers were outraged, to say the least.

So people turned to the black market to get their nicotine fix. People were meeting up in empty parking lots, exchanging money for a pack of cigarettes like they were buying cocaine. My Facebook feed was in an uproar; that infamous photograph of Cooperative Governance and Traditional Affairs minister Nkosazana Dlamini-Zuma with tobacco trader Adriano Mazzotti was doing the rounds; and theories began to circulate that the South African government was in bed with cigarette smugglers. It seemed our only hope was for Big Tobacco to take them to court.

So of course, when I came upon Telita Snyckers’s book Dirty Tobacco: Spies, Lies and Mega-Profits, I was intrigued. Was there any truth to all the conspiracy theories? I had to talk to the author herself.

It’s safe to say that most of us don’t think of the cigarette industry as innocent. For years, it has marketed smoking as a harmless (even beneficial) hobby: it will keep you skinny; it’s part of a glamorous lifestyle; all the cool kids are doing it… (Who doesn’t remember those chic Peter Stuyvesant ads?) Smoking adverts have long been banned, and we’re all aware of the health hazards; bold-lettered warnings are emblazoned on every pack.

But people still smoke – and Big Tobacco companies, just like any other business, are trying to make a living. Plus they’re taxed very highly, so the sudden surge in black market buying must be hurting their sales. The black market for smokes funds more than just cigarettes: the money goes towards funding sex traffickers, gangsters and terrorists. More than that, it opens new routes for even worse drugs.

But what Telita discovered was that major cigarette companies were smuggling their own products and selling them on the black market.

Telita is a lawyer by training, although she doesn’t see herself as a typical attorney. She began her career as a prosecutor, before finding her way to the State Attorney’s Office, where she worked in commercial litigation. At the time, one of her main clients was the South African Revenue Service (Sars), which eventually poached her because of her pragmatic approach to the law.

‘At Sars I set up the Special Compliance Unit, which looked at high-profile, high-risk tax evaders in the country; people like soccer boss Irvin Khoza and millionaire businessman Dave King. Over time, that unit evolved into what became known as the Rogue Unit.’