Why The Kgalagadi Is King 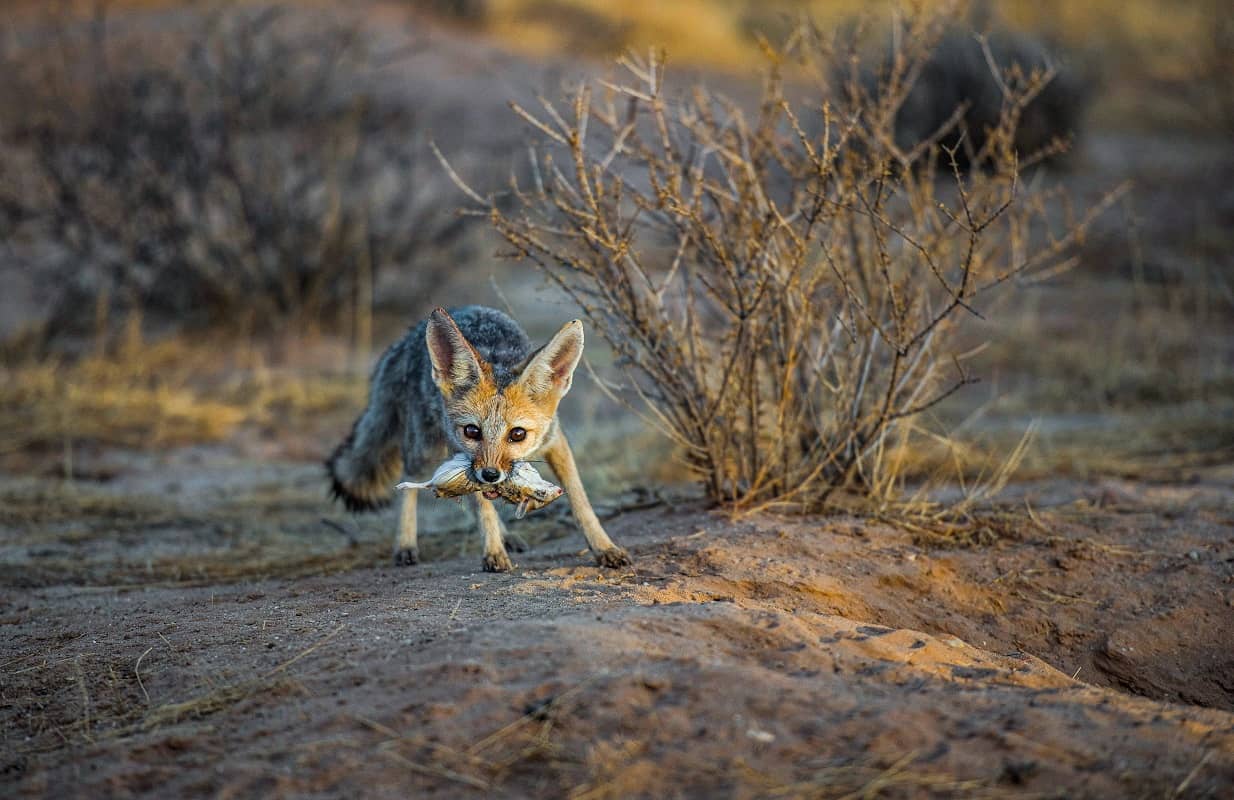 The Kgalagadi Transfrontier Park is remote but accessible; it’s wild, but you can stay in comfort in one of the rest camps. It also has the X-factor: You can lock eyes with a lion on a dune at sunrise, or hear the clang of horns as gemsbok bulls battle for dominance. We celebrate this wonderful park with amazing photos and stories from our readers.

ELLY WRITES: Jan and I live in a small village in the Netherlands, just south of Rotterdam. We first visited the Kgalagadi in January 2017. Since my recent retirement, we are very fortunate to be able to stay in the park for longer periods – our last trip was 24 days long.

What we love about the Kgalagadi is the absence of human presence. Except for the gravel roads, rest camps and waterholes, you don’t see buildings, advertising billboards or manmade structures in the landscape. You just see nature as it has been for centuries, although people who have known the area for 40+ years might debate this…

Still, driving around in the park, I can imagine the ancient place the Kgalagadi has always been. It makes me feel privileged, to experience this sense of undisturbed space and time – unique in our world today. 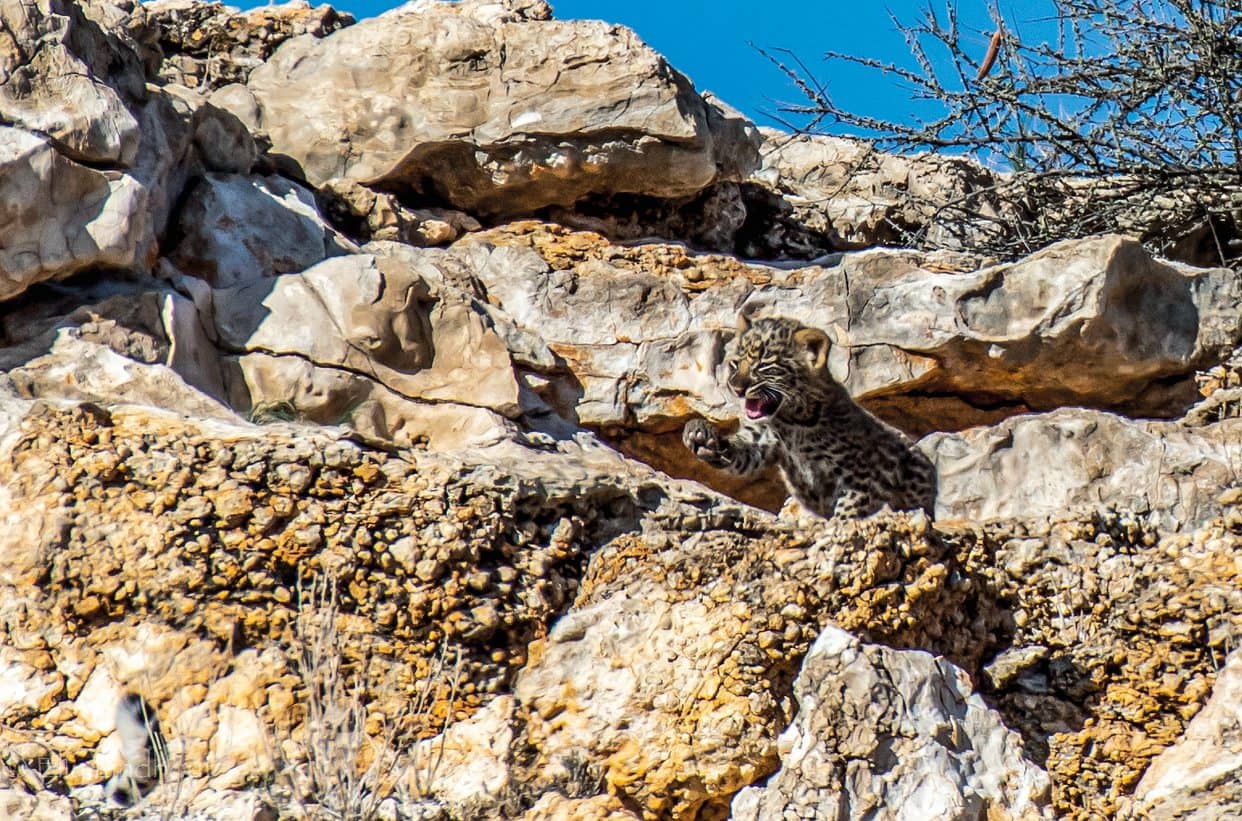 We love the anticipation when you leave camp early in the morning. What will you see? You have no idea! Maybe only a few turtledoves at the waterhole, a pronking springbok or a magnificent gemsbok on the horizon... or a spectacular cheetah chase, or a lion on a kill!

If you choose to wait at the waterhole with the turtle-doves, there is always a chance that a lanner falcon will appear, with an opportunistic pale chanting goshawk or a tawny eagle in the vicinity, waiting to steal the kill from the falcon...

But then, you might miss a thirsty lion coming to the next waterhole for a long drink after its early morning meal! Or secretarybirds doing a spectacular mating dance in the riverbed.

Besides the wildlife, there are other perks for photographers, like the magnificent landscape, the big skies and incomparable light. There are no tarred roads, which make for more “natural” scenes. Also, because visitor numbers are limited, you can sometimes be alone at a great sighting, and it’s easier to manoeuvre into a good position for a better angle – you’re usually not in another photographer’s way.

This leopard cub photo was taken on 21 January 2020, near Bataluma waterhole. It’s one of the two recent cubs of a well-known Kgalagadi leopard called Miera. Miera’s range is generally between Auchterlonie and Veertiende Boorgat, along the Auob riverbed. She has raised several litters of cubs; these new ones were first seen on the morning I took the photo. Since we were the second vehicle at this sighting, we had a prime spot.

Watching Miera interact with her tiny cubs for one and a half hours that day was incredible. This cub seemed to be the “naughty” one. Mom had her paws full and had to keep dragging the cub back to the spot where she’d hidden them. The other little one would just follow her obediently. Not this one!

Join the Kgalagadi Leopard Project group on Facebook – search for “KgalagadiLeopards”. They have a PDF guide that you can download, about all the known and commonly seen leopards and cheetahs in the park. 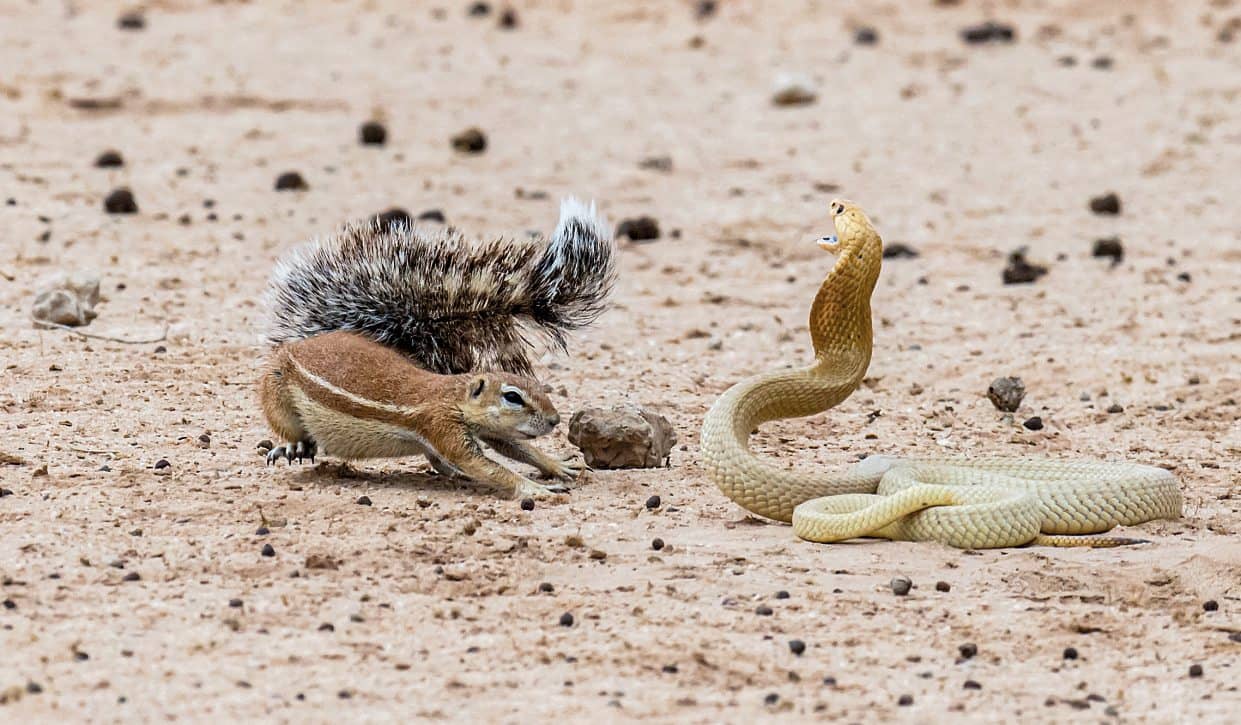 Number of visits to the park: 5

BOMBER WRITES: In December 2019, my partner Debbie and I spent three weeks in the Kgalagadi. This photo was taken on the day we left Kieliekrankie, heading to Kalahari Tented Camp further up the Auob River road.

We first stopped to take photos of a swallow-tailed bee-eater that had a nest on the side of the road. It was catching butterflies and other insects and taking them to the nest.

Just past the Urikaruus waterhole, we saw a parked car – the people seemed to be watching ground squirrels in the riverbed. As we got closer, Debbie saw there was a Cape cobra with the squirrels!

Surprisingly, the other vehicle drove off and we were left alone at this incredible sighting. For the next 15 minutes, we were the only vehicle there. One of the squirrels, a female, repeatedly tried to bite and chase away the cobra. The cobra continuously struck at the squirrel, but never actually made contact. You could see by the squirrel’s teats that she was nursing babies.

After maybe an hour, the snake went down a hole. The squirrel followed, but shot out again and ran off. The cobra didn’t reappear so we left the sighting. We assumed the battle had been about the snake gaining access to squirrel babies in the burrow…

The Kgalagadi is our favourite South African park. We love staying at the small wilderness camps because you get more time during the golden hour before sunset, when guests staying at the main rest camps have to start heading back. It’s the same in the morning – you can get to a prime spot long before someone who is staying at Nossob or Twee Rivieren.

The roads in the park can get very corrugated and can rattle your teeth! Seeing the tractor on the road, dragging those tyres that help smooth out the corrugations, is always a welcome sight.

We’ve had many great sightings in the park, but even on a quiet day you can simply park near a camel thorn tree with a sociable weaver nest in the boughs and photograph the comings and goings of the birds. 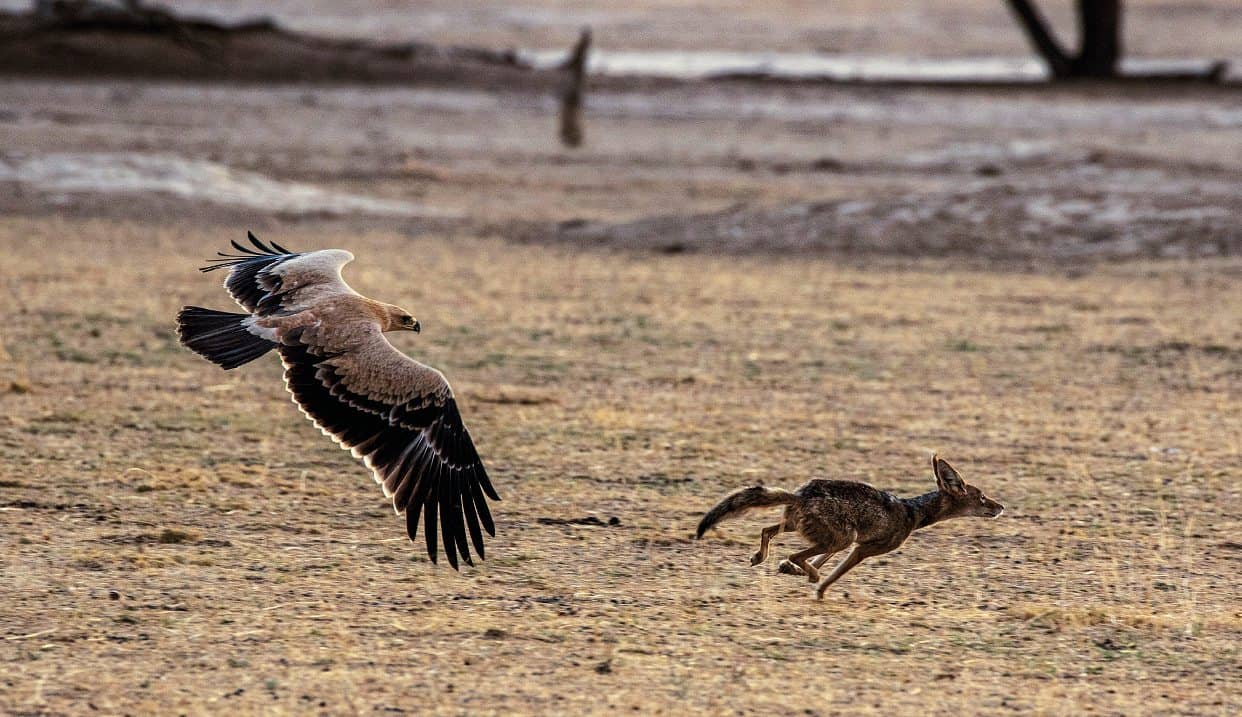 Number of visits to the park: 10