Travellers Guide To Namibia
'A celebration of vast dramatic landscapes, visitors cannot fail to be astonished by the Namib Desert' The Oryx, also known as the Gemsbok, occurs in the more arid regions throughout the African continent where it feeds on course grasses and thorny shrubs – often during the morning and late afternoon. The Oryx was chosen as Namibia’s national animal due to its courage, elegance and pride – with the national coat of arms bearing this unmistakable dweller of the desert.
Travel in Namibia is a celebration of vast dramatic landscapes and visitors cannot fail to be astonished by the Namib Desert, one of the oldest deserts in the world. The spectacular dunes of Sossusvlei are among some of the highest in the world, and the formidable Skeleton coast has laid claim to thousands of shipwrecks, while the dramatic Damaraland is home to the Spitzkoppe rock formations, bizarre petrified forests, and oasis-like valleys. One of the least densely populated countries on earth, cities such as Swakopmund and Luderitz have remained stranded in the time of German colonial rule while Windhoek, the capital, has become a bustling modern city and the main starting point of many African desert adventures.

The Fish River Canyon stretches 160km in length, up to 27km wide in places and 550m deep. Visitors can embark on a five day hike along the canyon floor, or for the less adventurous, you can stroll along the edge of the canyon or take one of the many day trips out to spectacular view points.

The Etosha National Park in the north is world renowned for wildlife viewing and the waterholes around the iconic Etosha Pan are an oasis for the vast herds and big predators that roam the salt flats. Stay in stunning bush camps such as Halali or Okaukuejo and witness first-hand the amazing sight of thousands of animals congregating at the waterhole to drink.

In the extreme north of the country, the Caprivi Strip which connects Namibia with Victoria Falls and the Chobe National Park in Botswana hosts exciting new wildlife havens such as Nkasa Rupara National Park, and Bwabwata National Park, both now thriving with new game, and especially birdlife.

Namibia’s adventure capital is Swakopmund which is situated on the west coast. Here adventure enthusiasts enjoy numerous activities including dune boarding, quad biking, hot air balloon tours, and many more. It is also the gateway to the vast Namib Desert. Visitors can camp nearby in Sesriem which is the perfect base from which to witness an unforgettable sunrise from the nearby colossal Sossusvlei dunes in particular Dune 45. 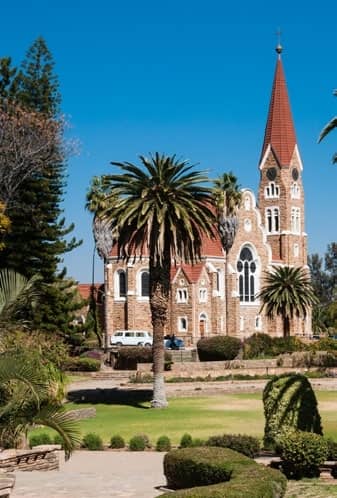 Inland, Damaraland boasts prehistoric rock art of Twyfelfontein and Brandberg while the imposing formations of Spitzkoppe, Africa’s Matterhorn, are a firm favourite with experienced climbers. The Brandberg Massif is famous for its thousands of rock paintings and engravings. Its most celebrated piece is the ‘White Lady’, estimated to be around 2,000 years old was discovered in 1955 and the mountain is considered a sacred place for the San tribes in the region. Brandberg’s highest peak is Königstein, and at 8,550 feet (2,606m), it is the highest mountain in Namibia.

The Owambo region is Namibia’s cultural centre and home to the Himba people, a culturally rich tribe notable for their striking dress. Guided walks in the region are available to visitors who seek a window into the traditional way of life in the desert.