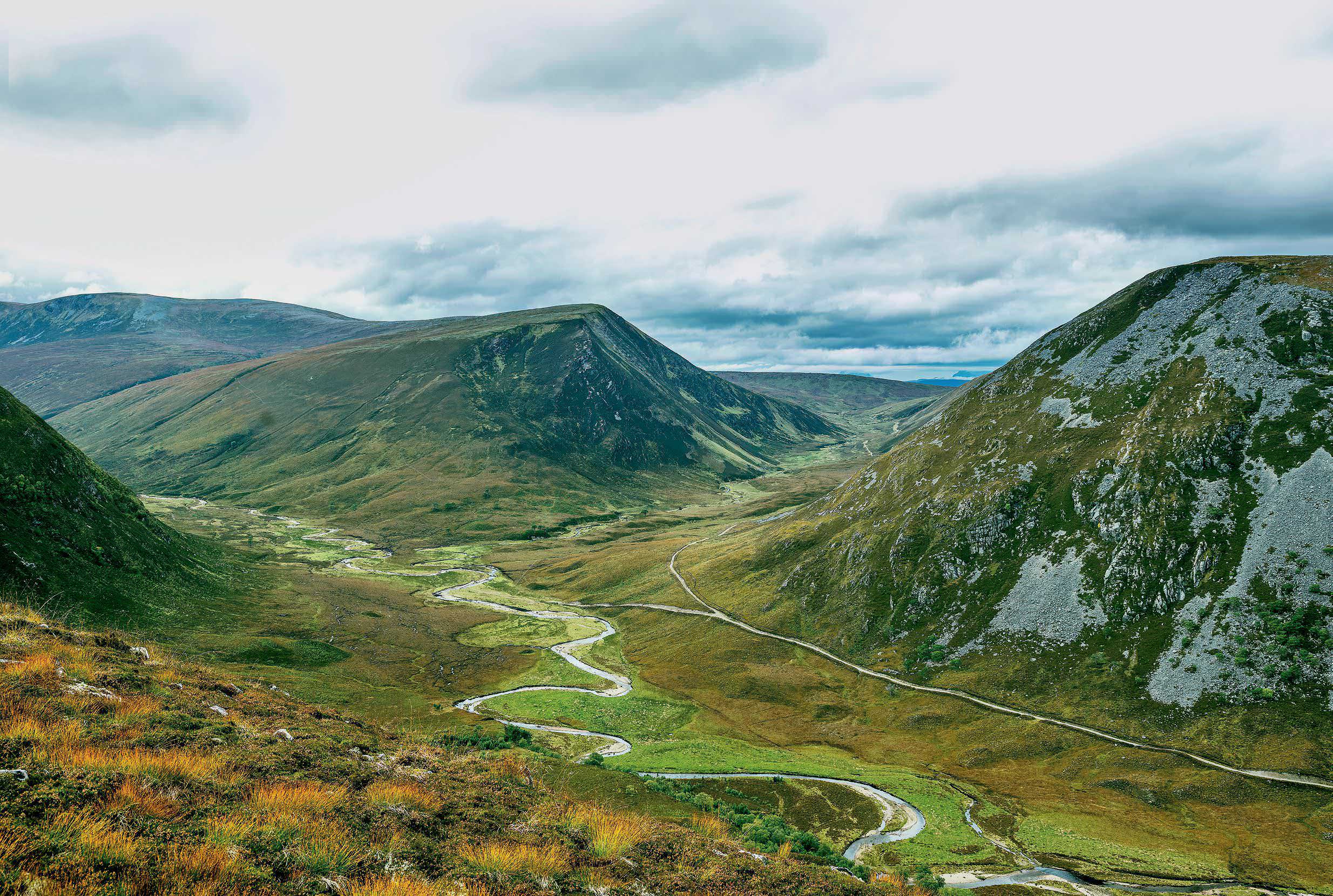 On an autumn road trip through the glens and moors of northern Scotland, Lisa Grainger swings by reimagined historic estates, beds down in snug country cottages, and loses herself on some of Europe’s most inspiring tracts of wilderness.

Cramb and I were in Perthshire, in the foothills of the Scottish Highlands, on a swath of land next to the Gleneagles estate, and I did indeed feel on top of the world—both physically and emotionally. Below us, a pair of young huntsmen clad in sage-green tweed led three stocky white ponies carrying a picnic lunch in wicker baskets on their backs. Streams burbled in the golden heather. In the distance, a hawk rode thermals above a jagged peak. And around us stretched mile upon mile of rust-coloured moorland broken only by the occasional loch, in which the dappled yellows and reds of autumn foliage were reflected.

It was the first day of a week-long road trip through the north of Scotland, on which I was to take in some of its finest new hotels and traverse some of its greatest tracts of wilderness. Having arrived at Gleneagles that morning, I was eager to get out and explore the nearby glens, but this being Scotland, it wasn’t long before clouds closed in and a steady drizzle began to fall. When, after an hour or so, my walking boots started to squelch with thick, peaty mud, even Cramb had to concede that it was time to call it a day. “What you need,” he said with a mischievous grin, “is a Sloegasm: a shot of sloe gin, topped off with champagne. That should warm you up.”

A Sloegasm would have undoubtedly raised a few eyebrows at Gleneagles a few years ago; then, it was more of a strait-laced, Scotch-and-haggis kind of place. But since its new owner, the 38-year-old Indian-born entrepreneur Sharan Pasricha, embarked on a multimillion-dollar redesign, which wrapped up this summer, it has become a new centre for fun and sophistication in the Highlands.

Reclining on a jewel-coloured sofa in the Century Bar and sipping Chablis from a crystal glass, Pasricha told me that his love affair with Scotland began on a tour with his Glasgow-born wife, Eiesha, the daughter of Indian telecom billionaire Sunil Mittal. His dream for Gleneagles, he said, was for it to again become a great Scottish playground—or, as it was once known, the Riviera of the Highlands. When the hotel first opened, in 1924, “people used to race up in their cars or on the train to be part of the social calendar,” he said. “It was all glamorous gowns and cocktails. We want to return to that, and show people of all ages what Scotland has to offer.”

Certainly, the hotel feels fresh and updated, with its fern-coloured walls, airy loft rooms, and marble-lined bathrooms. It’s buzzy, too: in the Century Bar, young whiskey lovers sampled the contents of an impressive wall of bottles, while in the tearoom, families shared Scottish fruitcake and scones. Over in the black-lacquer and plum-velvet American Bar (its design was inspired by the underground bars of the Prohibition era), a couple had snuggled up beside a silver champagne bucket.

Although it was wet outside, the grounds were also alive with activity. In the Clubhouse, with its gallery of Ryder Cup tournament photos, rowdy golfers were drinking craft beers. At the falconry centre, children were flying hawks and being taught how to handle ferrets—and screeching with laughter as the creatures insisted on wriggling up their sleeves.

When Ken Keith, a jovial 57-year-old guide with Wilderness Scotland, picked me up at Gleneagles, he wasn’t at all surprised by how busy it was. Tourism to Scotland is booming, he said. That’s not just because it is seen as a safe destination, a place associated with luxury products such as cashmere, whiskey, and smoked salmon, and one of the most outward-looking and progressive parts of the United Kingdom. It’s also because, in recent years, international investors, including France’s Xavier-Louis Vuitton, the Swedish Tetra Pak heiress Sigrid Rausing, and a tranche of wealthy Russians and Danes, have snapped up run-down estates and castles—attracted by favourable exchange rates, and the romance of owning a stately Scottish property. Unlike traditional landowners, primarily Scottish or English aristocrats who used the estates as hunting retreats, several of these new lairds are foresters and conservationists, keen to replace hunting with tourism and showcase the landscape of the Highlands in all its raw beauty. Some have taken former farms and hunting lodges and turned them into hotels—and it was to three of these properties that I was travelling north to explore.

THERE ARE FEW other places in Europe that contain such large expanses of wild, open land as Scotland. This remarkable landscape is the legacy of the Highland Clearances of the 18th and 19th centuries, during which tens of thousands of Scots were evicted from their land to make way for large, more profitable sheep farms. In that era, more than 6 million acres of the country were carved up into just a few hundred private properties.