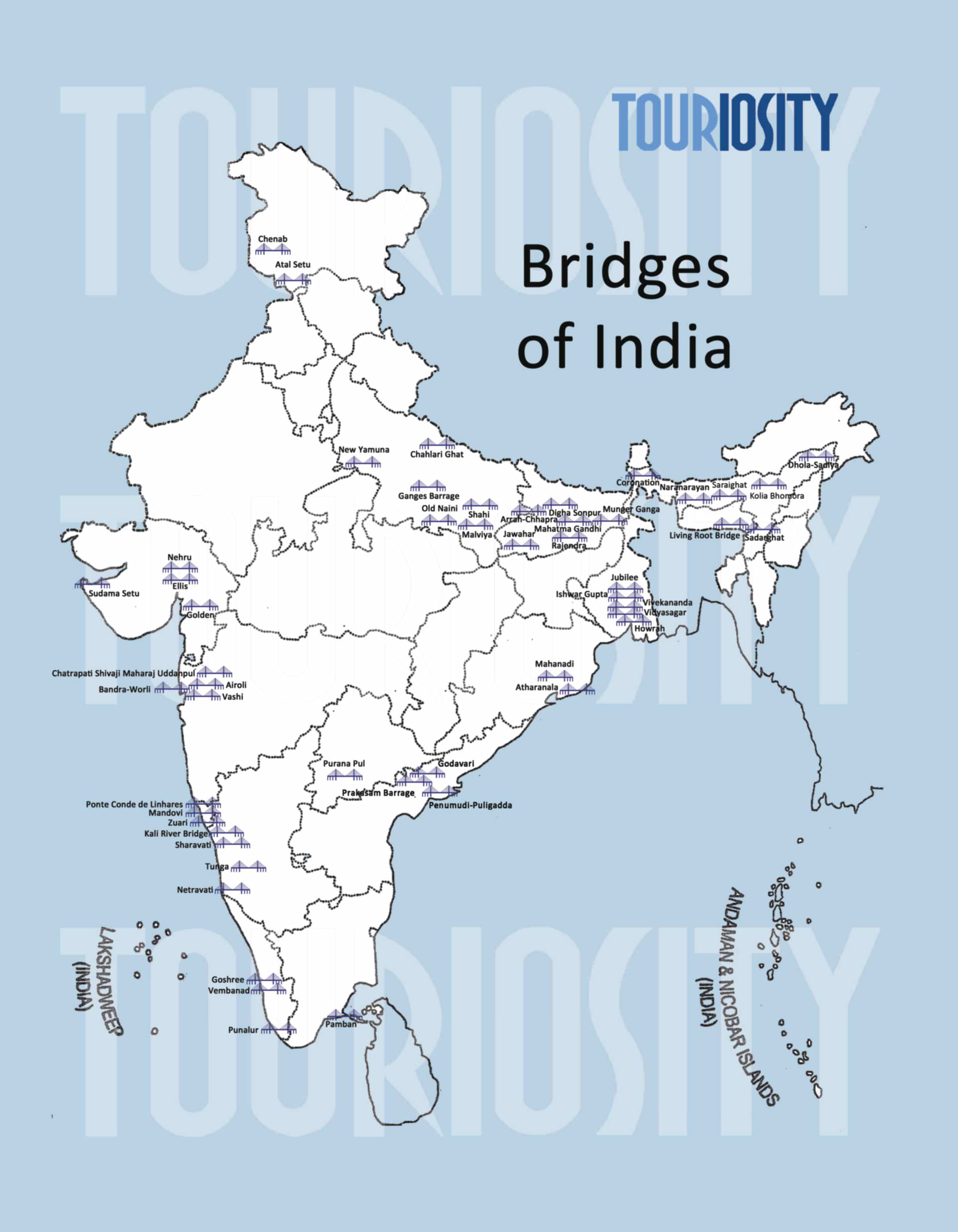 In this Snapshot Touriosity has listed the most important bridges across India. While some of these have historical reference, some are structurally significant or strategically important and some are sheer beauty or engineering wonder.

Prakasam Barrage is one of the very imposing bridges in the southern part of India. It connects Krishna with Guntur. It stretches across the Krishna River for over 1223 metres. At a lake, the barrage also acts like a road bridge. There are three canals of the barrage which run through Vijaywada. These canals render the city a Venetian look! The East India Company had sanctioned the bridge back in 1850. It was later named after the first Chief Minister of Andhra Pradesh, Tanguturi Prakasam. The agricultural richness of Andhra Pradesh can be attributed to the Prakasham dam over the lake.

Penumudi–Puligadda Bridge also stretches across the Krishna river. It is located on the National Highway 214 in Andhra Pradesh. The bridge covers the river from Penumudi in Guntur to Puligadda in Krishna district. The name is therefore quite straightforward! The bridge was inaugurated in 2006 by the erstwhile Chief Minister of Andhra Pradesh YS Rajasekhara Reddy.

Saraighat Bridge is a 1300 metre long bridge on the Brahmaputra. It is also the first bridge built over the Brahmaputra in Assam. It is named after the town of Saraighat through which it passes. The town is a neighbouring one of Guwahati in Assam and is located on the northern bank of Brahmaputra. The famous battle of Saraighat was fought near the Sarai village. The bridge is a rail-cum-road bridge and also the first of its kind over the Brahmaputra. There are two parks on either side if the bridge, Lachit Borphukan Park is on the south end and Chilarai Park is on the north end of the bridge.

Kolia Bhomora Setu is a road bridge over the Brahmaputra River. It is about 3000 metre long and is located near Tezpur and Kaliabor in Assam. It is a concrete bridge that connects Sonitpur and Nagaon districts on the north and south banks respectively. It is named after the Ahom General Kolia Bhomora Phukan. Kolia Bhomora is the second bridge in Assam (the first one being Saraighat), which accelerated the development of the north east to a great extent. The bridge connects NH 52 and NH 37. The Northeast Frontier Railway started the ideation in 1979 but actual work started in October 1981. The bridge was completed by 1986. The American Concrete Institute awarded the construction company of this bridge, the Hindustan Construction Company, the Certificate of Merit for the ‘Most Outstanding Concrete Structures’.

Naranarayan Setu is a whopping 2284 metre long bridge on the Brahmaputra in Assam. It is the third bridge on the Brahmaputra, after Saraighat and Kolia Bhomora. The Naranarayan Setu was named after Nara Narayan who was a 16th-century Koch king. It was inaugurated in 1998 by Atal Bihari Vajpayee, the erstwhile Prime Minister of India. The bridge connects Jogighopa and Pancharatna on the north and south banks respectively. Jogighopa is a town of Bongaigaon District and Panchratna is a town of Goalpara District, on either side of the Brahmaputra. The bridge is double-decked, with a railway track on the lower deck and a road on the upper deck.

At 9.15 km length this is the longest bridge in India, 3.5 km longer than Bandra Worli Sea Link in Mumbai. It connects Assam with Arunachal Pradesh and is the first permanent road connection between the two states. The bridge is also referred to as the Bhupen Hazarika bridge, after Bhupen Hazarika, a famous Assamese singer and filmmaker. The bridge stretches over the Lohit River, a tributary of the Brahmaputra through Dhola in Tinsukia district and Sadiya in the north. The bridge is equipped to withstand the weight of 60 tonne battle tanks for movement of defense assets to disputed areas in Arunachal Pradesh in case of Sino Indian invasion. The bridge had taken 5 years to complete and was inaugurated in 2017 by Prime Minister Narendra Modi and Minister of Road Transport and Highways, Nitin Gadkari.

This bridge is only 472 metre in length. The bridge stretches across the Barak river. It is located in Silchar, a city in Assam. The bridge links Silchar to Guwahati, the capital city of Assam. The Sadarghat Bridge is the only bridge built on the Barak River in Silchar city.

Also called the Veer Kunwar Singh Setu, this is a bridge across the Ganges that connects Arrah in Bhojpur district and Chhapra in Saran district of Bihar. The bridge is 4.35 km (14,290 feet) long and 24 metres wide and has a longest span of 120 metres (390 feet). It was inaugurated in 2017.

This is a rail and road bridge across the Ganges in Patna and connects the Digha Ghat in Patna with Pahleja Ghat in Sonpur. With a length of 4.56 kilometers this is the eighth longest bridge over water in India.

This is a bridge across the Son river that connects Dehri-on-Son and Son Nagar. Built in 1965, this bridge it 3 kilometers long and has been named after the first Indian Prime Minister Sri Jawaharlal Nehru.

This 5.75 kilometers long bridge over river Ganges connects Patna with Hajipur. It is the second longest river bridge in India and was inaugurated in 1982 by the then Prime Minister Mrs. Indira Gandi.

Also called the Sri Krishna Setu, this bridge is a rail-cum-raod bridge across the Ganges in Munger. It has a length of 3.7 kilometers. The bridge was inaugurated in 2016 by Prime Minister Sri Narendra Modi. The naming of the bridge is after the first Chief Minister of Bihar Dr. Srikrishna Sinha.

Built in 1959, this bridge is also called the Mokama Bridge or Rajendra Pul and was the first bridge to be built over the river Ganges to connect the northern and southern parts of Bihar. It is a Girder bridge with a length of 2 kilometers.

The Ponte Conde de Linhares or the Count of Linhares Bridge connects Ribandar to Panaji, the capital city of Goa. The bridge, also known as Ponte de Linhares is 3.2 km long. The bridge is quite old, being built in 1633 by a Portuguese Viceroy of India, Miguel de Noronha. The bridge runs along the flood plains of the river Mandovi. Beautiful salt pans on the banks can be seen from this bridge. On the causeway of the bridge, the Panaji carnival also takes place. The bridge was originally built on alluvial soil and stabilised with the trunk of a tree called Benth, locally known as Zambo. It was built to handle the load of horse drawn carriages. However, it can carry the load of heavy vehicles as well. The bridge has been damaged several times due to tidal motion.