45 Underground Attractions Around The World 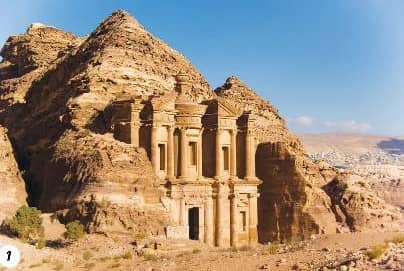 From wartime tunnels and salt mines to temples and shrines deep inside the earth’s crust to historic cisterns and ancient settlements beneath the modern-day metropolis, from nuclear shelter to a treasury carved inside the rocky mountain, the world under the ground presents a series of attractions to tourists who love to explore. In this Snapshot we have dug up the most interesting subterranean sights around the world for our readers.

The ancient city of Petra in Jordan is known to all. One of the most imposing attractions here is the Al Khazneh treasury. This is a structure carved directly into a sandstone rock face. It is believed to be an ancient tomb of Nabatean King Aretas IV dating to 1st century AD. In the 19th century it got the name of ‘treasury’ because the local Bedouins believed that a large amount of wealth was stored inside. As you enter through the six-column facade, deep inside the womb of the earth you get to see a colossal inner chamber and sanctuary.

The underground rail network in Stockholm is important for reasons other than fast commuting. Each metro station in the city is a treat for the eyes, replete with unique art, murals and installations. Considering a hundred odd stations, if you plan to spend a day looking at the art in each of them, you will feel like being in the world’s longest art exhibition.

29 km from Oudtshoorn, in the picturesque Cango Valley, one finds the spectacular underground wonder of Cango Caves. These are limestone formations on the foothills of the Swartberg Range. There are two types of tour here, the Standard Tour which is a one hour long heritage tour and the Adventure Tour which lasts for 1.5 hours.

While this is the fourth largest lava tunnel in Iceland, it is a popular tourist attraction due to its proximity to the capital city of Reykjavík. It is a 100 foot-wide tunnel that was formed when lava gushed out through it during a volcanic eruption more than 5,000 years ago. There is a metal pathway with lighting that allows visitors to see the impressive colours and geological formations inside the earth.

A great memoir of the Cold War is this bunker that was built in the late 1950s to house all 535 members of the Congress in the event of a nuclear war. The US government asked the owners of the 700-room Greenbrier Hotel, a luxury hotel with white Sulphur Springs, in West Virginia, for permission to build this emergency relocation center underneath the property. The hotel authorities agreed, and construction was begun in 1957. Built 720 feet underground, it could easily survive a nuclear attack. It has two levels and each level is the size of a football field. The bunker was kept a secret even from the members of the congress and the entrance was heavily guarded by undercover government employees. The bunker would be fully stocked with food, medicines and other essentials for about 1000 people for 60 days at a time for 30 years and the same would be replaced with fresh stock regularly. The place was decommissioned in the early 1990s. Today it is West Virginia’s most popular attraction. There are daily tours of the place.

A cliff-face in the Maharashtra state of India hides beautifully preserved murals, carvings and sculptures dating from the 2nd century BC to the 5th century AD deep inside the earth’s crust. In this UNESCO World Heritage Site there are a total of 30 rock-cut Buddhist caves with a network of halls that remained lost until in 1819 the tiger-hunting party of Captain John Smith accidentally stumbled across an entrance hidden inside the forest. The paintings inside depict the various lives and rebirths of the Buddha and have pictorial narrative of various Jataka Tales. These are considered as masterpieces of Buddhist religious art.

While we all know about the Colosseum in Rome, not many know that there is a lot to explore beneath the surface of the world-famous monument. There are dungeons where gladiators and animals waited before their fight. There is a reconstructed trap door and wooden elevator that was used to lift the fighters to the arena level.

About 650 feet under the ground, in an abandoned salt mine, in the vicinity of the Colombian capital city of Bogota, the Zipaquirá salt cathedral is located. The underground cathedral is built in the area hollowed out by miners. It is a place of pilgrimage of both locals and tourists. A tunnel leads visitors to the depth of the cathedral. It is open to visitors on all days except on Sundays when it is reserved for Catholic services.

Istanbul is known to have several ancient cisterns beneath it. The Basilica cistern is the largest and most popular of them all. This subterranean colossal tank was built underneath an ancient basilica under orders of Byzantine Emperor Justinian I in 532 AD. Under the Ottomans it came to be known as Yerebatan Saray. It was gradually lost and was only rediscovered in the 16th century when a Frenchman, intrigued by locals who could fish from their basements, began investigating. Today it is open to public and is an important tourist attraction in Istanbul. Supporting the structure, there are a total of 336 columns, many of which originally belonged to ruined temples. The bottom is filled with water and there are raised platforms for visitors to move around.

Kiek in de Kök is an important tourist attraction in Tallinn, the capital of Estonia. There are secret tunnels under these fortifications that are rich in history. The mysterious bastion passages were built during the 17th and 18th centuries to hide soldiers defending the city, redeployment of troops from one site to another, the movement of arms and ammunition and other equipment from the watchful eyes of the enemy. They were also used to monitor the enemy’s activities of planting mines. The massive walls surrounding the passages and the vaulted ceiling are made of limestone. Galleries are 1.5m - 2.5m in width and 2.5 - 3m in height. The scarp wall is over 3m, in places almost 4m thick. The bastions and passages were never really used for their intended purposes, but for storage space. Post the Crimean War, in 1857 it was no longer listed as military site and local municipality built parks on top of these man-made hills. In course of time the passages were completely abandoned, yet the curious people managed to get in through some opening and explore these from time to time, thus giving birth to countless stories and legends about the underground labyrinth. During World War II the bastions were used as shelter during the air raids and saved many lives. The shelters got a complete makeover during the Soviet era with stone slabs on the floors, ventilation, toilets, three-level metal bunk beds, electricity, telephone lines, pipelines for running water and all other necessary equipment to provide accommodation for people during a nuclear war. The nuclear war shelter was abandoned in the second half of 1970s. Thereafter it was temporarily used as a venue for storage of sculptures of the Art Foundation, documents etc. After the collapse of the erstwhile Soviet Union, many people of re-independent Estonia were unable to cope up with rapid changes around and ended up living on the streets and in these tunnels. Finally these were vacated in 2004, and the local administration started renovating them to make them accessible for public. While the exact length of these tunnels underneath the Old Town is not known, a total length of 470m has been renovated and is open to visitors.

Of all the tourist attractions in Moscow, its metro stations feature among the top. They are spectacular examples of Soviet art and architecture, and are replete with impressive mosaics, columns, statues and chandeliers. Many tour providers take visitors on a guided trip to the most interesting stations.