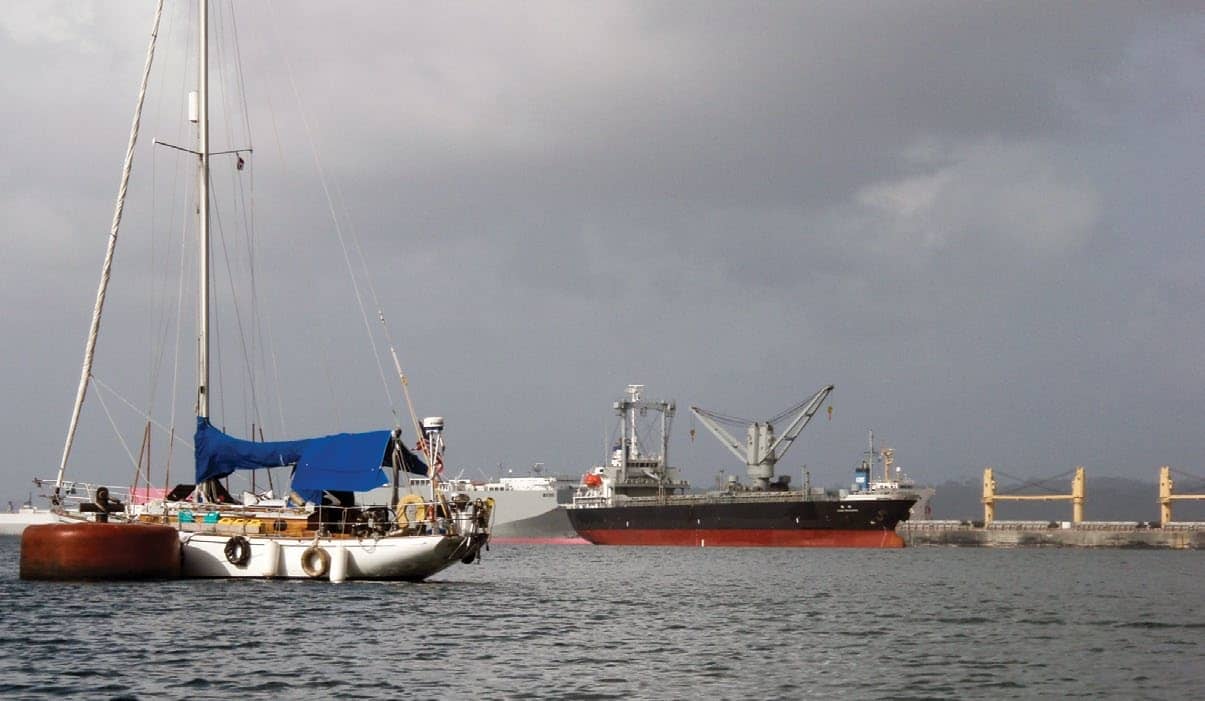 Adrift in the Indian Ocean and stuck in the Panama Canal

Editor’s note: This is the second part of a multipart series, “The toughest passages of 50,000 miles,” a look at the most difficult aspects of circumnavigators Ellen and Seth Leonard’s various ocean voyages.

In the last installment of this series (“Worst weather challenges,” September/October 2019, Issue 257), I covered the two passages that Seth and I considered our toughest in terms of weather and sea conditions. But challenging gales and storms are not the only ways in which a passage can be trying. Gear failures and breakages can be just as difficult and even threatening.

Like many sailors, we’ve also had troubles with the “Iron Mainsail.” This has mostly been due to the fact that for much of our 50,000 miles, our engines have been old and very used. We were even given an old transmission for free when we put in a 20-year-old, raw-water-cooled Yanmar to replace our 40- year-old, oil-spewing Westerbeke. We knew there was likely a reason it was free, but the transmission did just fine for the first few months. Not until Australia dropped below the horizon behind us on the first leg of our Indian Ocean crossing did we have problems. The clutch was slipping, we were already out of sight of land — and it was dead calm.

For six days we drifted. We didn’t have the parts or the expertise to rebuild the transmission, and once a clutch starts slipping it just gets worse with use. We decided to save any life that was left in it in case we had to motor the last bit into the anchorage in the Cocos Keeling atoll. Slowly, painfully slowly, the west setting current took us toward the wind line 200 miles away. Under the baking sun, the sea was deep blue and mirror still. The enormous brown bodies of Australia’s deadly sea snakes rippled across the surface. An oily swell kept Heretic, our 1968 cutter, rolling constantly. The mainsail, hoisted and centerlined to stabilize Heretic, slatted loudly despite the two reefs we’d put in. By the fifth day, even though we still had plenty to drink, both of us could empathize with the maddened, becalmed sailors in The Rime of the Ancient Mariner.

This experience — certainly our most tedious passage ever — would also have taken honors as our worst breakage on passage, except that it was completely outdone by an earlier event. It might be stretching it a bit to call the Panama Canal a “passage,” but as it happens to be the only section of a circumnavigation for which you actually must have an engine, and as we ended up not having an engine, our experience in the canal was definitely the worst underway breakage of our 50,000 miles.

Everything seems fine When we arrived in Colon at the Caribbean entrance to the Panama Canal, Heretic appeared to be in fine shape, waiting only for provisions to tackle the Pacific crossing just on the other side of the isthmus. Seth and I, along with our two friends who were aboard with us at the time, quickly got started on the whole bureaucratic process of transiting that isthmus. Since we were sailing on the proverbial shoestring, we were relieved to discover that we did not need to hire an expensive agent but instead could deal with a facilitator we met at the Panama Canal Yacht Club. That convivial watering hole of waiting voyagers has since been requisitioned and bulldozed, but at the time the club was a quiet haven where one could grab a cheap beer and burger and meet other sailors and the facilitators. Our facilitator was a godsend. For only $50, he drove us to all the necessary offices, translated for us, helped us with the reams of paperwork, rented the big ropes and tire fenders we would need, and got our transit scheduled for only 10 days away — a real feat when sailors were waiting weeks.

The day came. Half an hour before the appointed time that evening, we weighed anchor and made our way to the rendezvous point with the pilot boat that was to bring out our transit adviser. A large, genial man stepped aboard Heretic and introduced himself as Cooper. As dusk fell, we made our way toward Gatun locks, the three giant locks that lift vessels 85 feet to the artificial Gatun Lake that comprises most of the canal. Following Cooper’s instructions, we rafted to a tug against one wall and consequently had no need to handle lines, despite having the required five people on board: helmsman (Seth) and four line handlers (me, our two friends and Seth’s dad who had flown in to join us). So, we could look around at the ships sharing the lock with us, at the “mules” (electric locomotives) that handle the cables that keep ships in place in the lock, and at the water swirling fast into the lock, raising us a third of the way up in only 15 minutes.