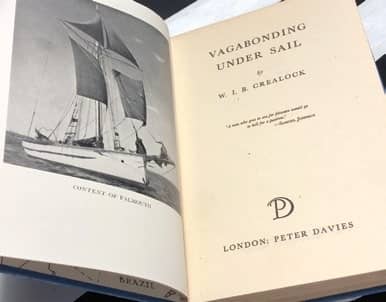 While he is best remembered as the designer of a host of famous yachts including the Westsail, Pacific Seacraft, Cabo Rico, Dana 24 and Columbia, English-born W.I.B. Crealock (1920-2009) began his love affair with sailboats in 1948 when he and three friends sailed from England to British Guiana.

While studying naval architecture at Glasgow University, Crealock worked at Glasgow Shipyard and designed tankers during World War II. After the war, restless and ready for adventure, he and three friends bought an old cutter named Content and “set out to study the behavior of boats at sea.” After a two-year journey, they arrived in the U.S. Crealock recounted his adventures in a book titled Vagabonding Under Sail.

Content departed the U.K., heading south to Spain, Portugal, Morocco and Tenerife, then across the Atlantic to British Guiana, St. Lucia, Jamaica and Florida, and sailing up the East Coast to end at City Island.