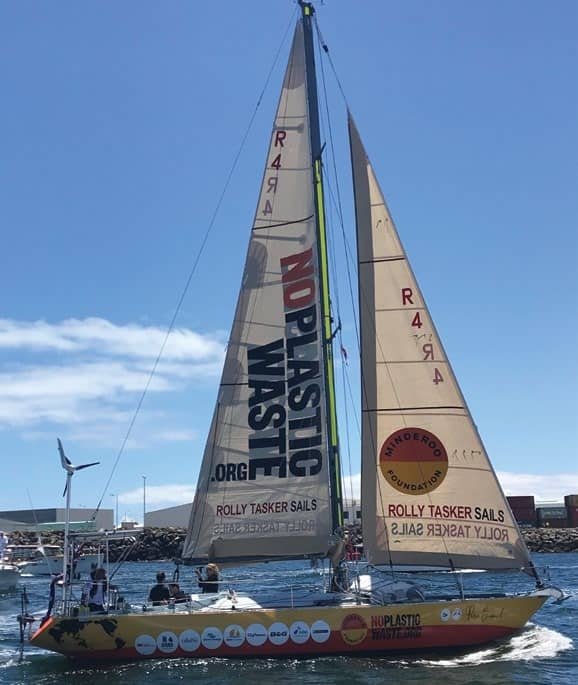 EIGHTY-YEAR-OLD AUSTRALIAN SERIAL CIRCUMNAVIGATOR JON Sanders has departed for his 11th circumnavigation. This time, however, Sanders isn’t sailing around the world just for the thrill of it. He’ll be collecting samples of ocean water for delivery to Curtin University in Australia, where they’ll be tested for plastic contamination.

The water samples will be part of the “#NoPlasticWaste” project, which seeks to find viable solutions to the global plastic waste crisis. The samples will be analyzed by Curtin University’s Organic and Isotope Geochemistry Centre in order to further the understanding of the rate of plastic pollution in the Southern Ocean. Organizers behind the project hope that Sanders’ respected position within the sailing community will help raise awareness for the cause over the course of his journey.

This type of voyage represents a change of pace for the experienced nonstop sailor, as he will be stopping in eight foreign ports to mail samples to the university. Sanders cemented his place in the record books in 1988 when he became the first person to complete three consecutive nonstop solo circumnavigations. That voyage took 657 days and covered 71,023 nautical miles. 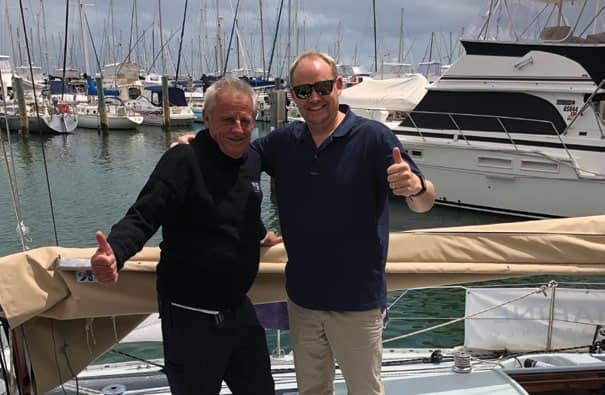 For his 11th circumnavigation, Sanders is sailing an S&S 39 built in 1971. He identifies extra-strong rigging and sails, as well as a reliable form of self-steering, as key elements of a successful oceangoing vessel. After that, Sanders declares, “The simpler the better.”

Sanders expects that this trip around the globe will take about 10 months, landing him back in Australia in September 2020. But, does he plan on embarking on a 12th circumnavigation after he completes the #NoPlasticWaste project? Well, the legendary seafarer says, “Why should I sit around at home when I could be out sailing?”

THE ORIGINAL MAYFLOWER THAT CARRIED THE PILGRIM settlers to North America in 1620 was a broad-beamed ship of 90 feet packed with 132 people and probably not capable of making more than 5 or 6 knots. Now, 400 years later, a group of marine and tech companies is working on a modern autonomous vessel also named Mayflower, which is planned to have a speed of 20 knots and is expected to make the 3,220mile journey in 12 days, compared to the original voyage of 66 days. Unlike the crowded original, this 49-foot vessel will be autonomous with no one aboard.

ProMare, a nonprofit research firm based in Chester, Conn., is coordinating the project with assistance from Plymouth University and the University of Birmingham in the U.K. The vessel was designed by U.K. firms Whiskerstay Ltd. and MSubs Ltd. This new Mayflower will use IBM artificial intelligence — including a mix of machine learning, edge computing, and cloud technologies — to steer, navigate and perform collision avoidance on the voyage. The vessel will have enough computing power on board to operate autonomously even if it loses communication with IBM computers ashore.

The new Mayflower will also carry a range of sensors that, according to ProMare, scientists will use to perform “groundbreaking research in meteorology, oceanography, climatology, biology, marine pollution and conservation, and autonomous navigation.”

The vessel’s propulsion will be via electric motors driving a propeller, assisted by a sail. Solar panels will provide electrical power, and the ship will carry a diesel engine for backup power. The new Mayflower is currently being built at Aluship Technology in Poland and is expected to be delivered to Plymouth, U.K., in spring 2020, with the voyage to commence on Sept. 6, 2020.