An ocean of Possibilities 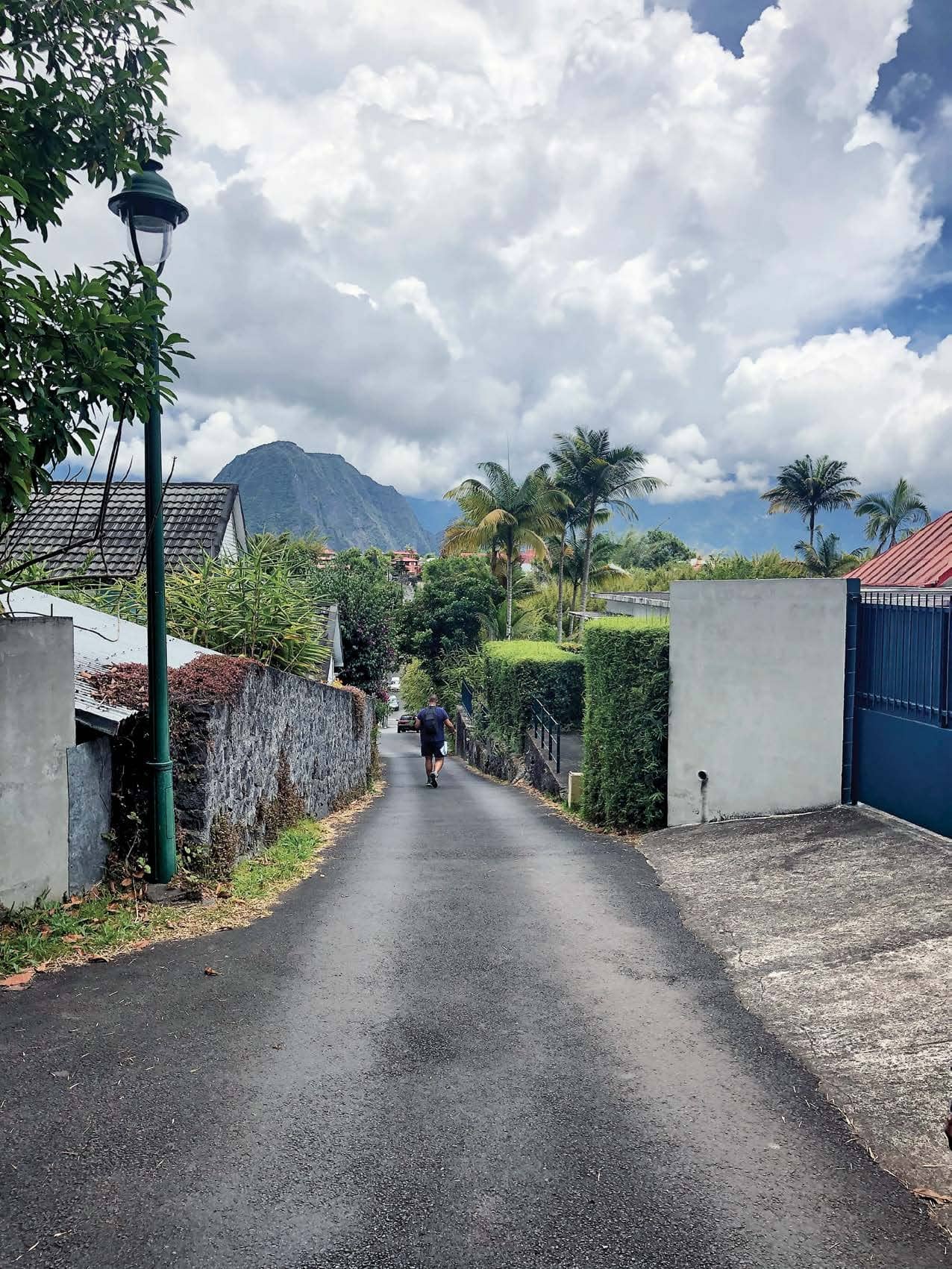 ALL around me, the landscape is otherworldly and stark. Ahead of me, steps lead down into a crater. In the distance, against an electric blue sky, an enormous white plume of cloud poses as smoke billowing from the mountain top. And it would be fitting too, given that this is the Piton de La Fournaise (“peak of the furnace” in French), one of the most active volcanoes in the world. To gaze upon beauty of such scale is to be humbled by the magnitude of the natural world’s grand scheme of things.

Well, that’s all the time you have to ponder on life and the universe before it’s time to continue on down the stairs; there’s a long way to go, after all. 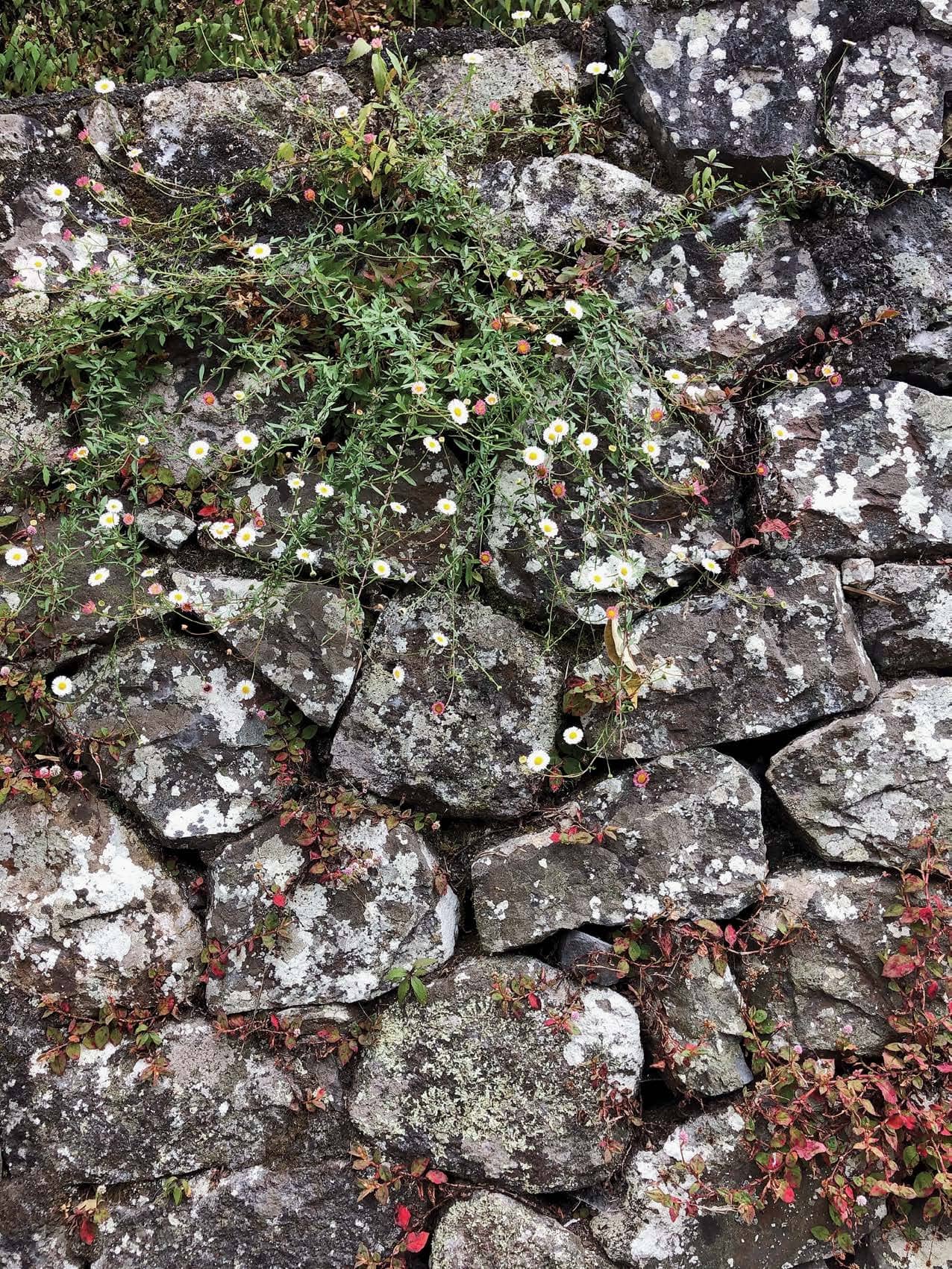 Around 30 minutes of climbing down and I’m finally on the floor of the Enclos Fouque caldera – the hollow left by magma after an eruption. Vast fields of dried-up ‘rope’ lava stretch out in all directions and, when I look up at the huge cliffs that form the wall of the crater I just climbed down, I can’t help but feel a bit overwhelmed. I’m only going up to a smaller crater, Formica Leo, one of the more recent pop-ups on the main crater floor. There are yet others on the same path, going towards the centre of the crater, to the summit, a trek of another couple of hours.

I, sadly, don’t have the luxury of time. Still, not too unfortunate, given that my next appointment is lunch. 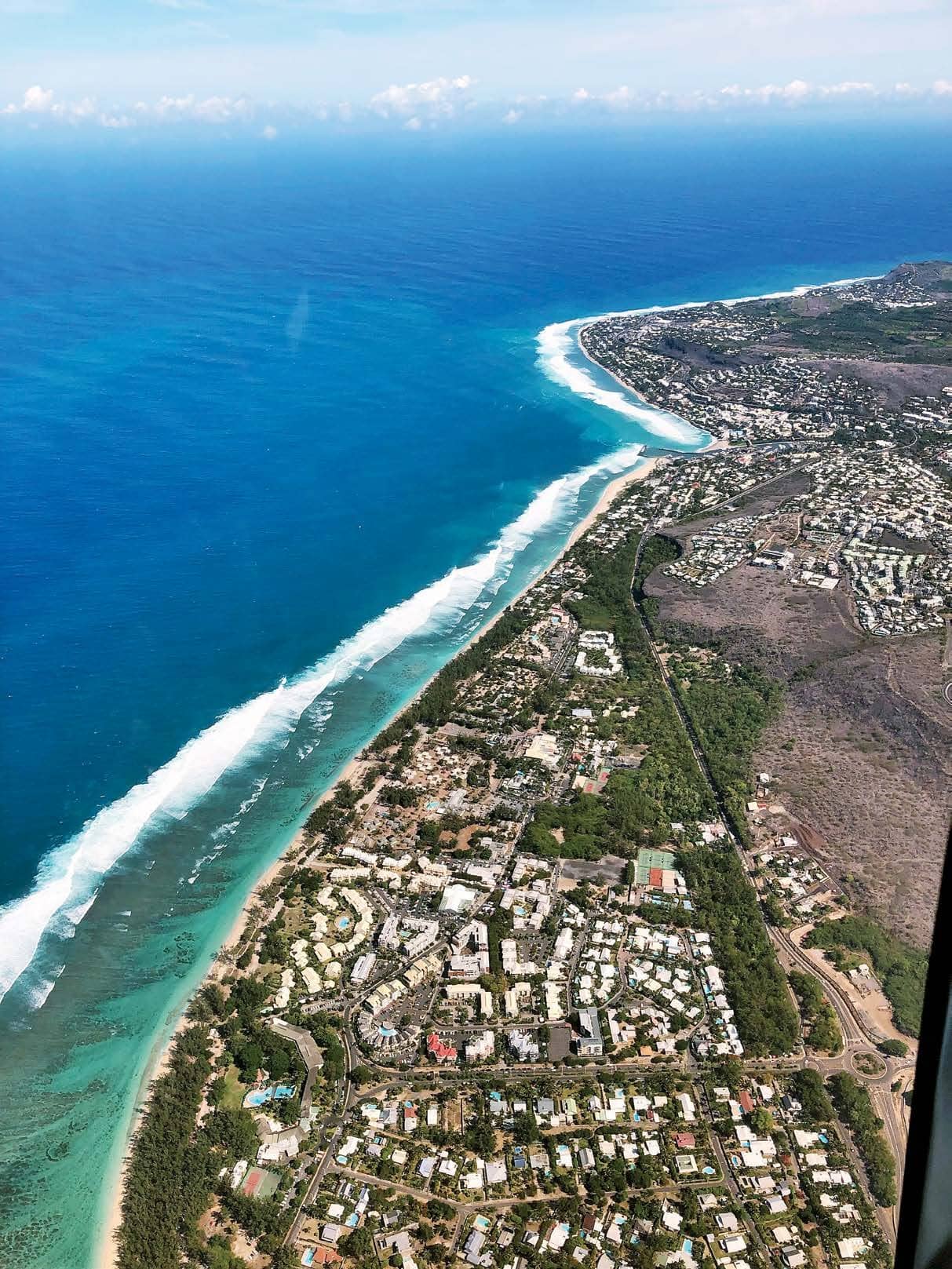 And that isn’t too far away either. Within an hour of scaling the volcano, I’m sitting in the town of Le Tampon, in a cosy little restaurant, nursing a glass of pre-lunch ‘rearranged rhum’. The rolling hills outside, bathed in soft sunlight on my way up to the volcano, are now covered in mist. 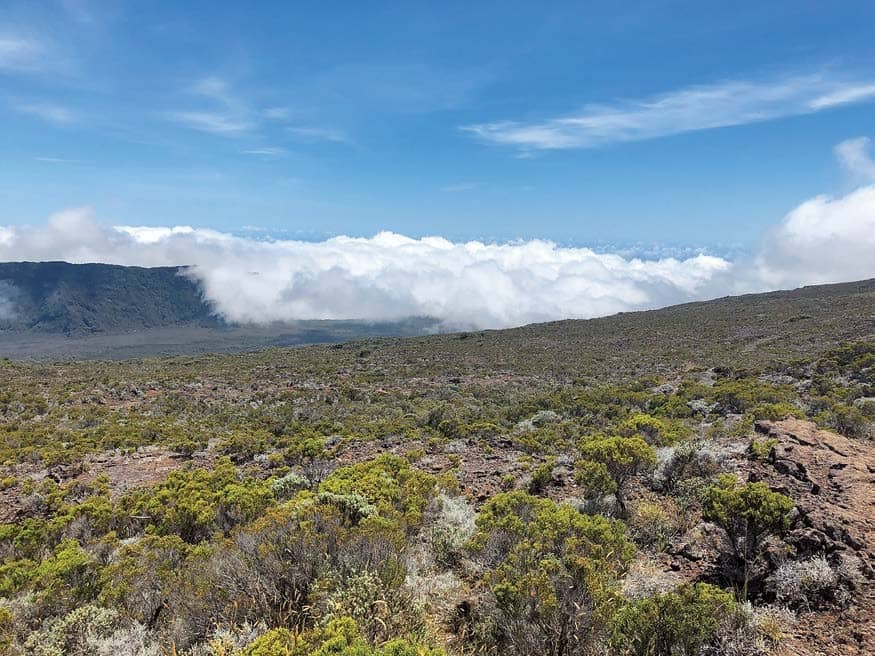 Lunch is a delicious Creole salad of fresh fruit, vegetables and meat, followed by a swordfish steak and crème brûlée. And, of course, lots of wine. It’s an hour-long affair, as is the norm on Reunion Island. 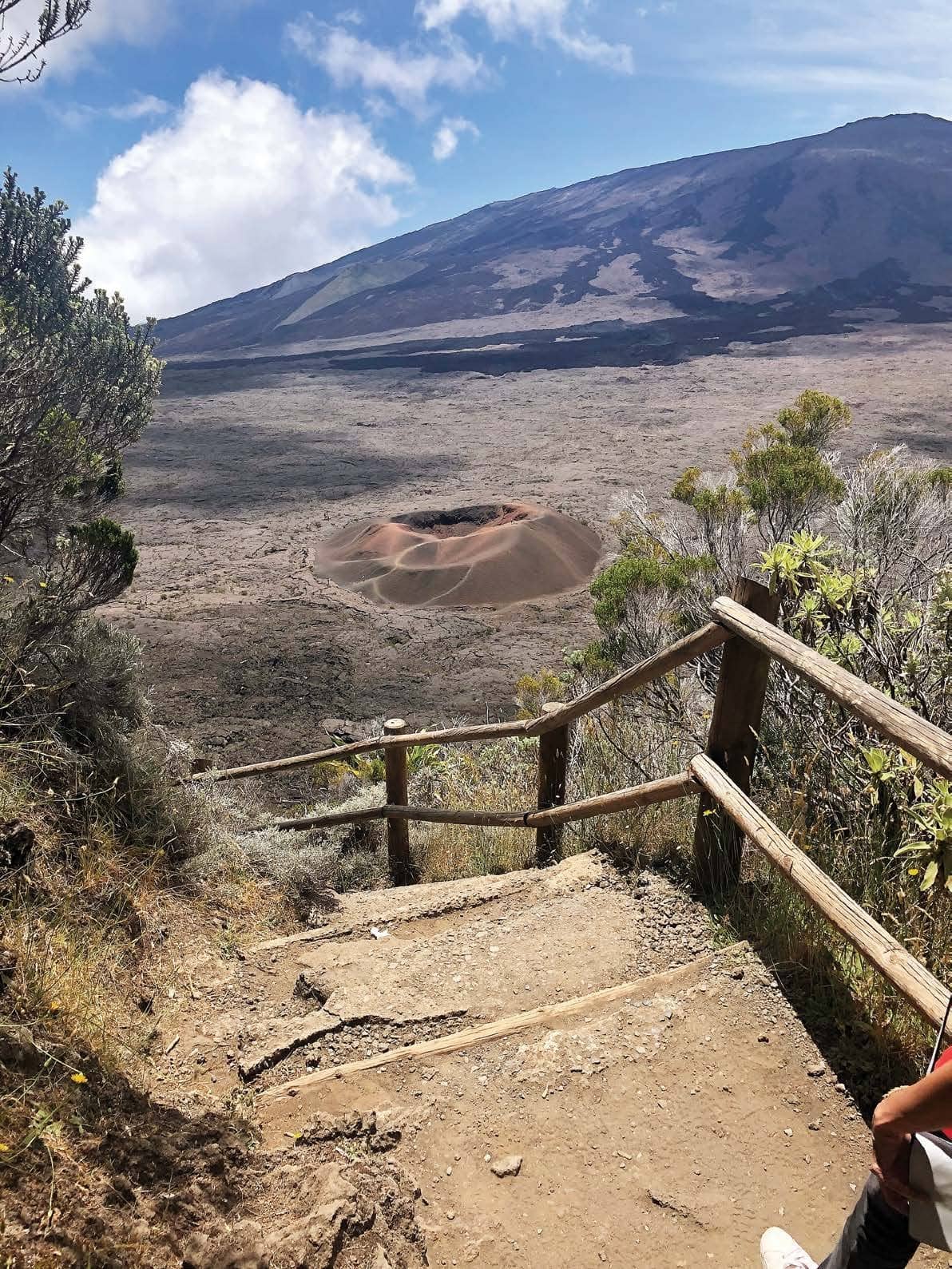 A small island between Madagascar and Mauritius, this French Overseas Territory is not your typical paradise in the Indian Ocean. Here, “island life” is lived with a certain twist to it.

My first impression of Reunion Island is that of a typical ‘paradise in the sun’. From Roland Garros Airport in the capital city of St Denis, I make my way to the coastal village of St Gilles, via well-paved roads hugging the sun-kissed coastline, passing beaches of first white and then black sand along the stunning blue-green hues of the ocean. But that’s only on one side. The unique thing about being on Reunion is that, from most places on the coastline, you can see the mountains, towards the centre of the island. The island is made up of two volcanic mountains, ever crested in clouds, and the contrast with the sunny coast presents a surreal view. 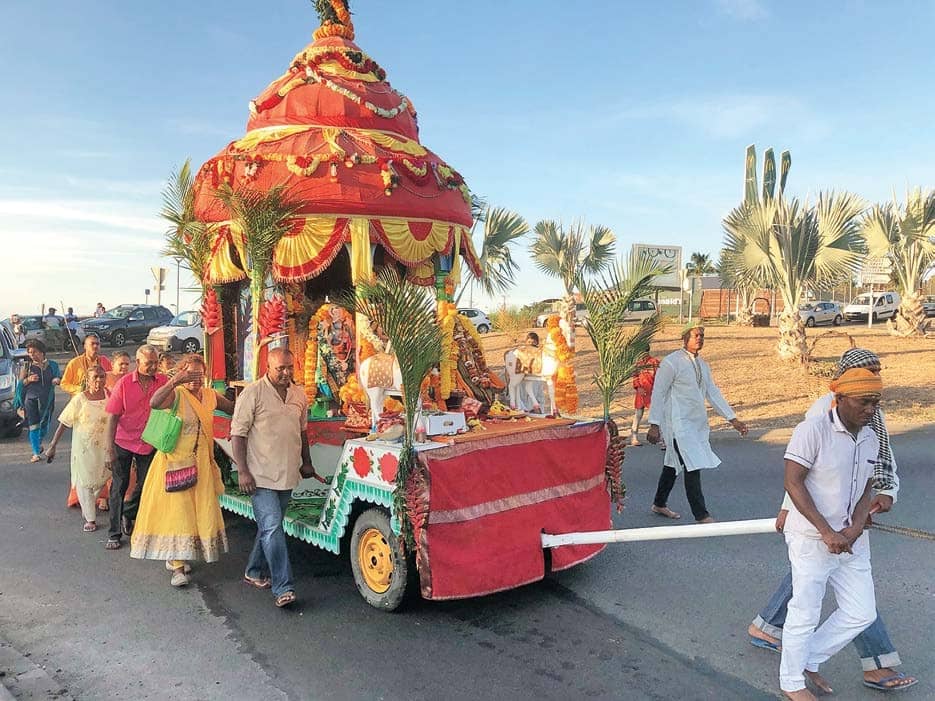 For a better, bird’s-eye view of the island, there are helicopter services that offer 45-minute fly-by tours over the volcanic calderas, gorges, little villages on the side of the mountains and, of course, the coastline. Flying over the prehistoric, volcanic landscape, I feel like I’m in a Jurassic Park film. For some, this tour will serve as a literal overview of the places you could visit over the course of your stay on the island. Either way, the chopper ride is a one-of-its-kind experience.

St Gilles is among the most popular coastal destinations on the island and for good reason. There are reefs about a kilometre out from shore, which result in a beautiful lagoon off the beach. The reefs aren’t exactly in the best of health, but, owing to the efforts of locals and the government, there are many small fish that call it home. The lagoon makes for a natural pool next to the beach and, it’s especially popular at dusk, visitors floating in the calm waters that reflect the gorgeous colours of the setting tropical sun. 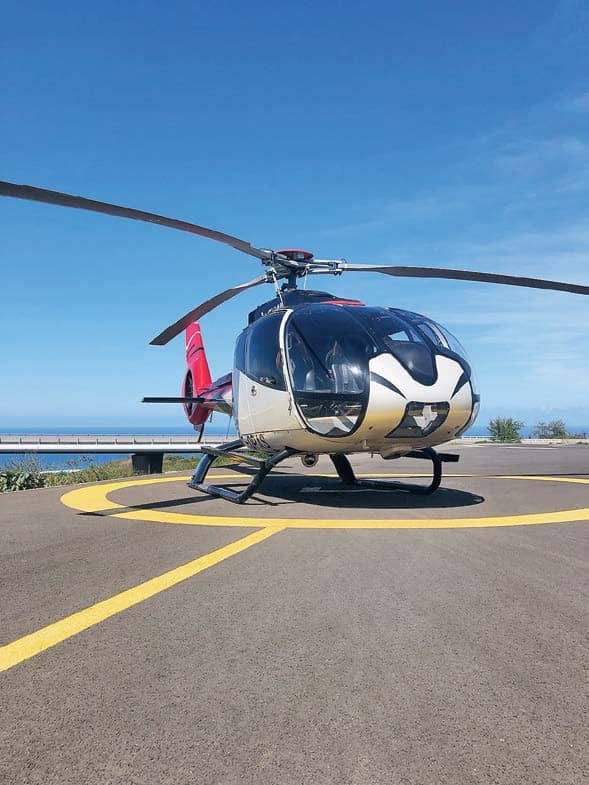 After sundown, I visit with the Indian community on the island, which forms a major chunk of the population. Lucky for me, the local Tamil Cultural Association has arranged for a temple visit. I am to witness Thimithi, a ritual that involves men from the local community walking across a bed of burning coal while carrying a ceremonial pot of milk on their heads. The coal is so hot, it roasts my face, even though I’m sitting at least six feet away. And yet, men of all ages have been preparing for weeks for this event. There’s a huge crowd of locals and visitors cheering on the proceedings. In the glow of the burning coal, the masses chant, “Om Shakti, Om Shakti”, as the walkers line up, restless in their adrenaline-fuelled frenzy. It’s a heady mix of faith, wonder and human will. The Indians on Reunion might have migrated generations ago, but they still hold on to practices that are centuries old. At the end of the first couple of days, my realisation that there’s nothing typical about this particular island in the sun is reinforced.