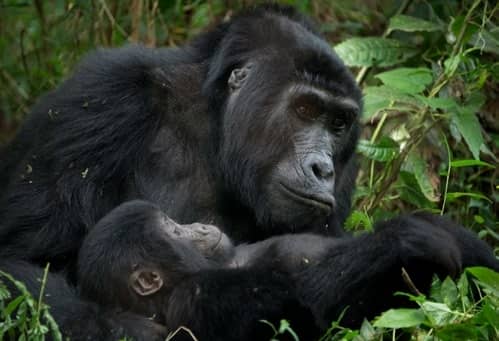 Meet the majestic mountain gorillas of Africa in their natural habitat.

As I stare into the eyes of a 400-plus-pound silverback, I feel like we are sharing a Zen moment. The male mountain gorilla reclines in the leafy brush while a few babies cause a ruckus playing in the treetops overhead. Paying no attention, he closes his eyes and dozes off, not bothered by their antics or our small group of tourists. Every so often he checks the nails on his weathered hands, rolls over and goes back to sleep.

The youngsters continue swinging in the trees, putting on a show. Around the corner moms, babies and teenagers appear as in awe of us as we are of them. One of the juveniles shows offhis dance moves, twirling in circles until he is so dizzy he falls.

“He’s drunk on heliconia leaves,” John, our lead guide, says. Playing it up for the camera, the little dancer poses for photos and then wrestles with another juvenile in front of his audience. Behind the dancing gorilla, an even tinier baby mimics his actions. We see a mom nursing another infant and several other females tending to their young. We sit and watch as the family allows us into its world without hesitation.

We are with the Oruzogo family group of habituated mountain gorillas in Uganda’s Bwindi Impenetrable National Park. Lying in the Ruhija east sector of the park, the family has been open to tourist visits since late 2011. Named after a common plant locally known as Oruzogoto, the habituation of Oruzogo group began in December 2009. At the time of my visit, the family had 17 members including three silverbacks, five babies and two juveniles.