Do The Wight Thing 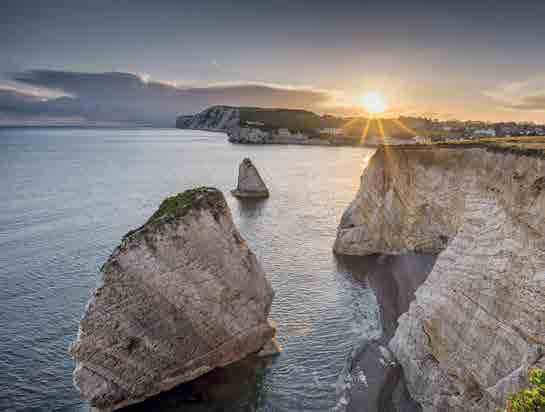 ‘Was it a herbivore?’ enquired my six-year-old son Sonny. We were gazing up at a 3m iguanodon in the DinosaurIsle museum. ‘Yes,’ I replied, quickly scanning some fact sheets. ‘And 120-million-year-old iguanodon bones were actually found here in the 19th century.’ ‘Wow,’ he replied. Meanwhile, my two-year-old son Sol sat nearby playing in a box full of sand, merrily sweeping away grains with a paintbrush to unearth plastic dino bones beneath. I was impressed that, on a rainy day, there was enough palaeontology play to keep both kids amused.

Right from the start, the Isle ofWight reveals its appeal to families, with the ferry ride from Portsmouth to Fishbourne proving short enough not to be boring, but long enough for kids to feel they’re going on an adventure. Sol waved and shouted ‘Bye bye!’ at the shrinking Solent coast for 10minutes after departure.

Less than an hour later, we were driving off the ferry toWhitecliff Bay Holiday Park, our east-coast base for three days. Part of the Away Resorts chain, it’s a cheerful chalet, caravan and camping set-up, with the usual clubhouse, pool and games area. But

it’s the swish new TriBeCa Lodges that had caught my eye. These large ‘static caravans of the future’ boast a shiny kitchen, open-plan dining and lounge, two bathrooms, kids’ room with bunks and a lovely master bedroom with freestanding bath and five-star hotel-like soft white linen. The vibe is more luxe Airstream than ’80s caravan, and we all ended up in the outside hot tub each night, complete with giggling, screaming and cold dashes indoors afterwards.