Visit The Most Beautiful Temple Towns Of India 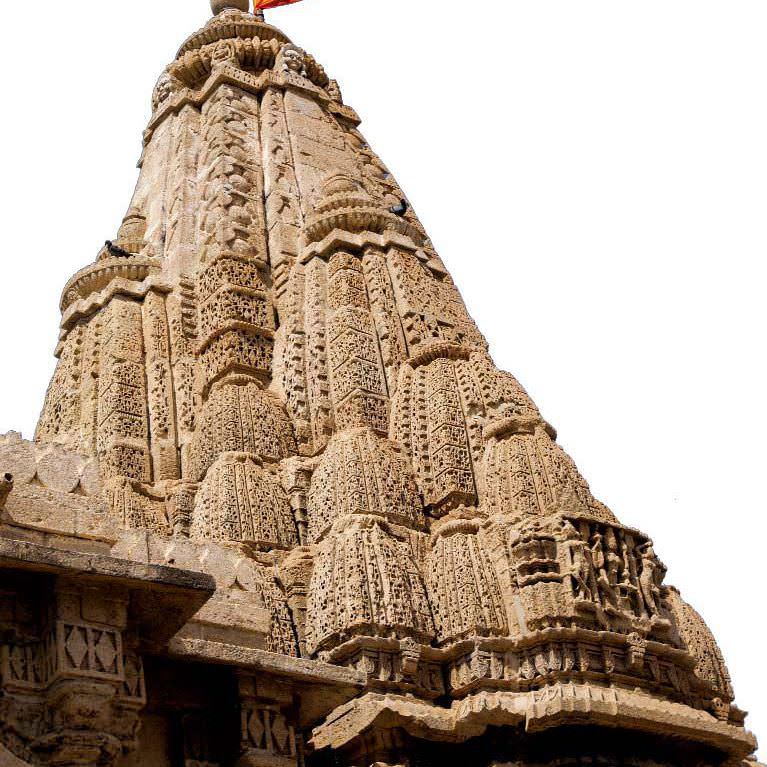 The cultural and religious diversity of India can be seen in the numerous ancient temples spread across the length and breadth of the country, many of which are also architectural marvels 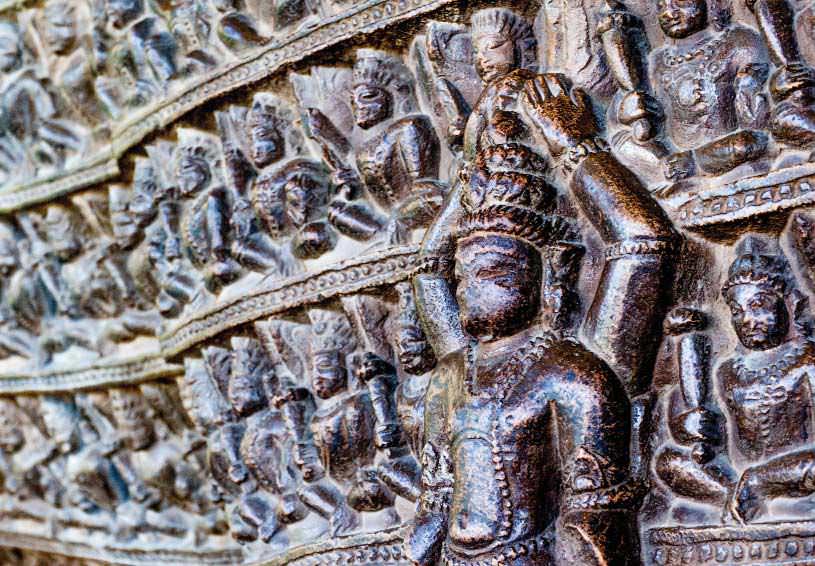 The Khajuraho Group of Monuments is a UNESCO World Heritage Site which is globally renowned for its erotic sculptures and Nagara-style architecture.The exquisite artwork of Khajuraho temples have mesmerised visitors since time immemorial. Interestingly, the origins are shrouded in regional folklore.The temples were built in the short span of a 100 years, from 950- 1050 AD in a truly inspired burst of creativity. Of the 85 original temples, 22 have survived till today to constitute one of the world's great artistic wonders. Khajuraho, the ancient Kharjjura-vahaka represents today a distinct pattern of art and temple architecture of its own reminding one of the rich and creative period it witnessed during the Chandela rule. It was the principal seat of authority of the Chandela rulers who have left a rich architectural legacy. But for Chausath-Yogini, Brahma and Mahadeva which are of granite, all the other temples are of fine grained sandstone, buff, pink or pale yellow in colour.

The architectural splendour testifies not only the craftsmen's artistry but also the extraordinary breadth of vision of the Chandela Rajputs under whose rule the temples were conceived and constructed.Yasovarman (AD 954) built the temple of Vishnu, now famous as Lakshmana temple, is an ornate and evolved example of its time proclaiming the prestige of the Chandelas.The Visvanatha, Parsvanatha and Vaidyanatha temples belong to the time of king Dhanga, the successor of Yasovarman.The Jagadambi, Chitragupta, are noteworthy among the western group of royal temples of Khajuraho. The largest and grandest temple of Khajuraho is the immortal Kandariya Mahadeva which is attributed to king Ganda (AD 1017-29). The temple is decorated with intricate sculptures that are perfect examples of ancient Indian art.The other examples that followed viz., Vamana,Adinatha,Javari, Chaturbhuj and Duladeo, are smaller but elaborately designed. Accommodation options: The Lalit Temple View Khajuraho, Radisson Jass Hotel Khajuraho, Ramada Khajuraho, Hotel Clarks Khajuraho,Hotel Isabel Palace, etc. Connectivity: Khajuraho is connected to Delhi and Agra with regular flights. Khajuraho has its own rail head. 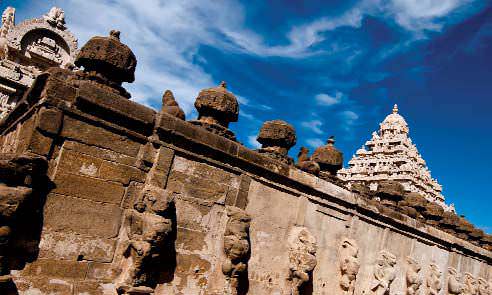 Kanchipuram, also known as the 'City of Thousand Temples', is one of India's seven sacred cities and is famous world over for its exquisite temples.Apart from Hindu temples, Kanchipuram is also home to few Jain temples, Buddhist monasteries and mosques.The city is divided into two sectors – Vishnu Kanchi and Shiva Kanchi.While Lord Vishnu resides in the former division, Lord Shiva and Goddess Parvati can be found in the latter.The Ekambareswarar, Kailasanathar,Thirumarugal,Varadharaja Perumal, Kamakshi Amman and Devarajaswami temples are amongst the prominent ones. Dedicated to Lord Shiva, the Ekambareswarar Temple has been spoken about by Tamil poets of the second century.The temple is enormous and the doors are nearly 40 feet tall.The temple has a mango tree, which is 3,500 years old. Goddess Shakti is worshiped in three major cities out of which Kanchipuram ranks first in importance.The gold plated main tower and the golden chariot are the special features of the Kamakshi Amman Temple.This temple constructed on five acres of land, houses a gallery, which presents the life history of Adisankaracharya.

Belonging to the eighth century, Kailasanathar Temple is amongst the oldest structures in the city and is dedicated to Lord Shiva.The construction was commenced by Rajasimha Pallava, while his son Mahendra Varma Pallava completed it. The Devarajaswami Temple is dedicated to Lord Vishnu and was constructed by the Vijayanagar kings. A 10-metre tall statue of Lord Vishnu lies immersed in a large tank, which is drained once every 40 years. It is that time when the statue can be viewed.

Accommodation options: GRT Regency-Kanchipuram, Hotel Baboo Soorya, Shelter Beach Resort, among others. Connectivity: The closest airport to Kanchipuram is the Chennai Airport. Kanchipuram can also be reached via Chengalpattu Railway Station on the Chengalpattu- Arakkonam line. By road Kanchipuram is just 57 km from Chennai. 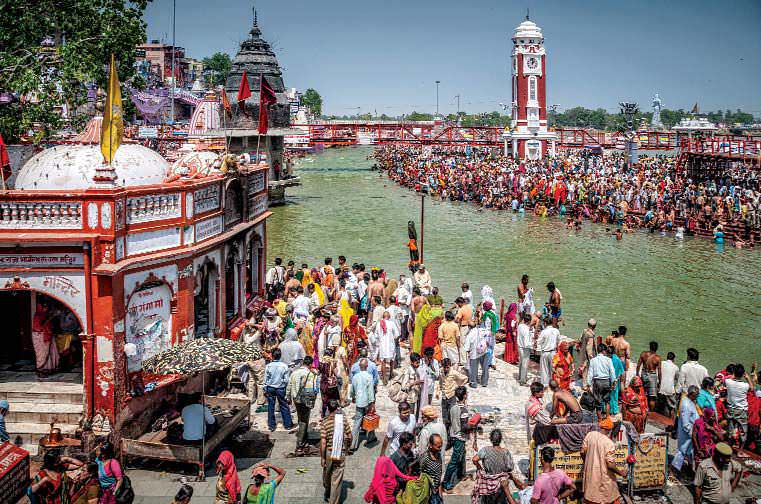 Haridwar is renowned destination when it comes to temple towns of India, being the gateway to the four pilgrimages of Uttarakhand. Haridwar is also considered as the starting point among pilgrim tourists for their journey to the sacred sources of the rivers Ganga and the Yamuna.According to legend, Prince Bhagirath performed penance here to salvage the souls of his ancestors who had perished due to sage Kapil’s curse.The penance was answered and the river Ganga trickled forth from Lord Shiva's locks and its bountiful water revived the sons of King Sagara. In the tradition of Bhagirath, devout Hindus stand in the sacred waters here, praying for salvation of their ancestors.

Hari Ki Pauri ghat, a major religious spot, was built by King Vikramaditya to commemorate the descending of Ganga after years of difficult prayers and fasting done by his ancestor Bhagirathi. It is believed that Lord Vishnu had left his foot prints on a rock at this ghat. Everyday at twilight, the Har Ki Pauri ghat comes to life with singing prayers and lit up lamps along the Ganges where masses of people witness this ritual. It is believed that a bath at Har Ki Pauri provides salvation from sins and completely cleanses soul. Floral tributes and lit up lamps floating on the Ganges is an enchanting sight at this ghat.

Standing atop the Neel Parvat, Chandi Devi is one of the prominent temples in Haridwar.The temple was built in 1929 A D by the king of Kashmir, Suchat Singh. It is believed that the main statue of goddess Chandi Devi, who killed the demon brothers Shumbh and Nishumbh, was laid here in the eighth century A D by Adi Shankracharya. Ropeway facility is also available to reach the temple.

Bharat Mata Mandir is one of its kind in Haridwar and is dedicated to Mother India.The temple traces its history from the times of Ramayana to present day.This eight-storied temple houses the pictures and idols of some of the great Indian men from ancient to present times and pictures of the various cities of India. Other renowned temples and places of tourists' interest include Mansa Devi temple, Sapt Rishi Ashram and Sapt Sarovar, Sati Kund and Rajaji National Park.