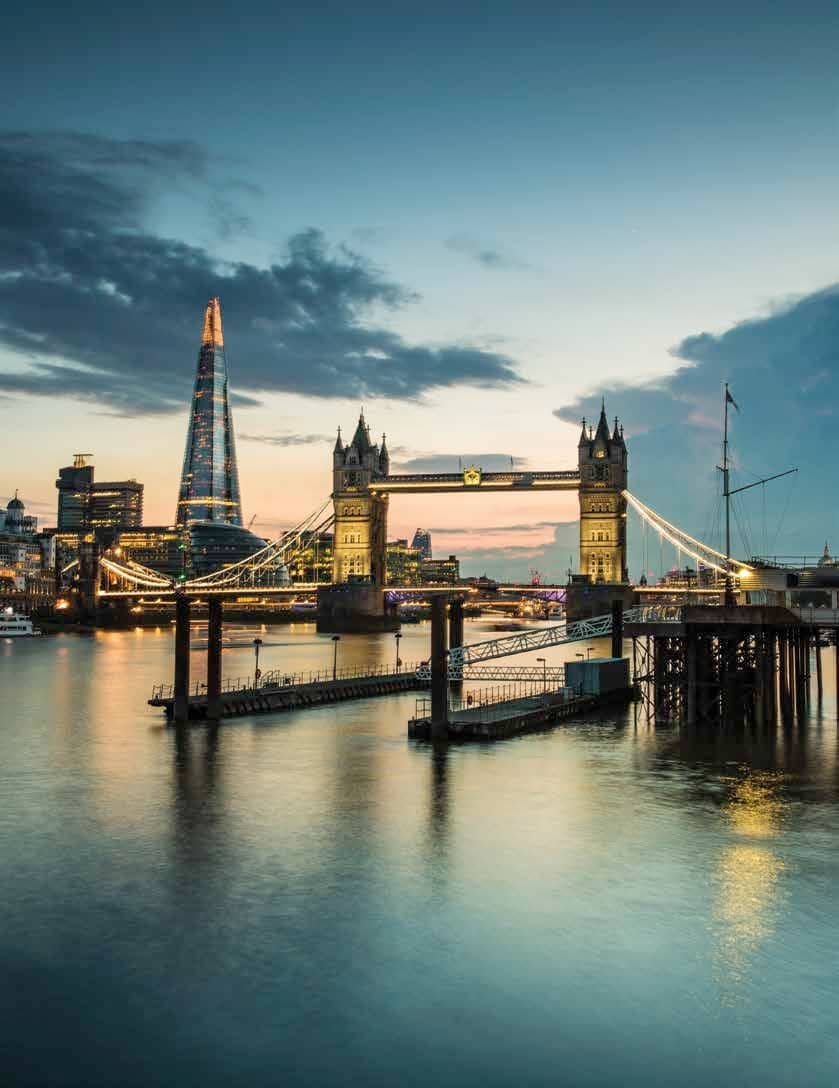 The Biltmore opened after an 18-month closure and £60 million refurbishment that transformed the former Millennium Grosvenor Square into only the second of Hilton’s new luxury hotel brand, LXR. It joins the Habtoor Palace Dubai (the former St Regis), with a third property also now open in Anguilla. 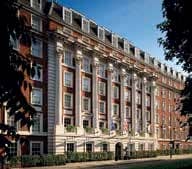 The hotel has two entrances, one on Grosvenor Square and the other around the back on Adam’s Row, where valet parking is available and from where the event facilities can be accessed directly. The property is in a rough T-shape, with the top of the T facing on to the square. It looks very luxurious, with a liveried doorman waiting to welcome you in. From the main reception you can see the entrance to the Pine Bar, plus the Tea Lounge and the Betterment restaurant and bar. 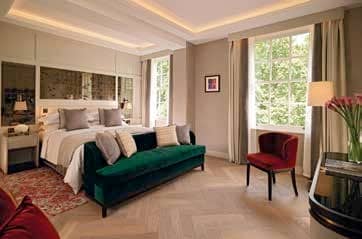 The 307 rooms (including 57 suites) are set over seven floors and are in three main colour schemes – blue, green and rust red. All feature pale block flooring and a décor of neutral opulence, with natural, hessian-style wallpaper, painted wood panelling and Chinese-style etched mirrors. There are 17 categories at present (I was told these may be reduced to make booking simpler), which range from the 22 sqm Double Deluxe room to the 160 sqm Presidential suite. Some suites on the eighth floor are duplex.

The large sash windows of our 43 sqm King Grand Premier with View room overlooked Grosvenor Square. It had a wooden-framed super-king bed, a sitting area with a brown velvet, art deco-style sofa, and a desk with power and USB points. A curved cabinet housed a minibar, Nespresso machine and kettle. The marble bathroom had a tub, a power shower, a Japanese-style toilet and Penhaligon’s amenities.

The Betterment is by Jason Atherton, who is in charge of all of the hotel’s food and beverage, including banqueting and room service. The restaurant is excellent – quite a stark space in terms of design, but the food is top-notch. The Pine Bar offers more than 100 whiskies, and the Tea Lounge is a relaxing spot that we used after our meal. 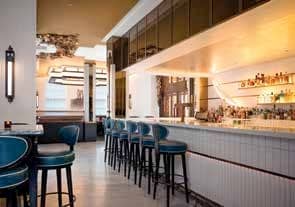 The Biltmore has one of the best hotel gyms I’ve seen in central London – large and with great technology, such as an exercise room with a TV wall where exercise classes are beamed through for you to join in. The meeting facilities are extensive and include a 500 sqm ballroom that seats 320 people for dinner.

The refurbishment has upgraded the hotel to a new standard, and the food and beverage help it to stand out from some strong competition, as does the service. Highly recommended. Tom Otley 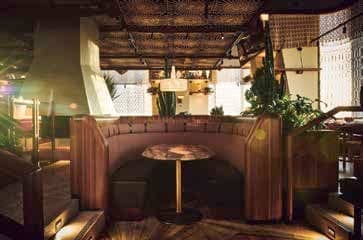 Hip US brand The Standard opened its first overseas outpost in King’s Cross last July. It has hotels in New York, Los Angeles and Miami, and has since launched in the Maldives.

The hotel is housed in the former Camden Town Hall Annexe – a 1974 Brutalist office block opposite the St Pancras Renaissance hotel on Euston Road, although the entrance is on Argyle Street. It is steps from King’s Cross St Pancras and St Pancras International stations. The retro curves of its concrete façade are a striking sight. Three floors have been built on while a scarlet pill-shaped external lift to Decimo restaurant on the top (tenth) level has been added.

The bold, colourful interiors pay homage to the seventies period. At the heart of the ground-floor public area is the Library Lounge, a good-looking, low-lit space with slouchy leather sofas and tables that attract laptop-wielding types by day and cocktail drinkers by night. This is the site of the former Camden Council Library, and the in-house librarian has clearly had fun sourcing books for the shelves, which are compiled under categories such as “Order” and “Chaos”, “Hope” and “Darkness”, and “Adult relationships”. You’ll find Sounds Studio here, too, a recording booth that hosts weekly live music, DJ sets and talks. 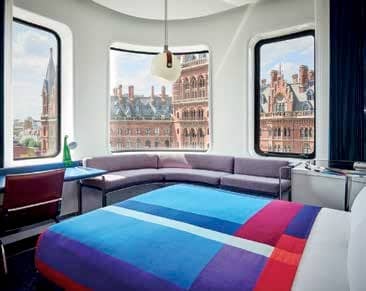 The 266 rooms and suites are in 11 categories, starting with 13 sqm Singles, 19-26 sqm Cosy Cores (windowless but well designed) and 16-19 sqm Queen’s Standards. The top categories are on the eighth and ninth floors and include King’s Terrace (28-37 sqm, with outdoor baths) and the 68 sqm Suite Terraces, which have a further 62-64 sqm of outdoor space with superb views. These floors feature light wood accents, while most other categories have red, blue and purple colour schemes and bed throws by Wallace Sewell, designer of the Tube seat fabric.

All have brown robes, Italian bed linen, well-stocked minibars, Bang and Olufsen speakers, and desks or tables to work at. Guests in higher categories can avail of Stutterheim raincoats and turndown service.

The bed in my fifth-floor King’s Superior (33-37 sqm) was placed in the centre of the room, looking out at the neo-gothic St Pancras Renaissance, with bay window seating for enjoying the view. The open-plan bathroom had a walk-in shower and freestanding tub. Curves featured heavily in the design, reflecting the façade, and the soundproofing was excellent. 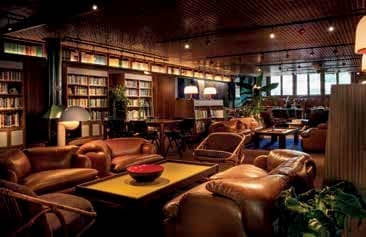 Food and drink is a big focus. All-day restaurant Isla and Double Standard bar are both led by executive chef Adam Rawson. The former serves an à la carte breakfast and seasonal British coastal cuisine, and has an outdoor terrace (with an original Banksy). The latter is a lively spot serving a wide range of beverages, pub fare and “NYC dive bar food”.

Decimo, led by Michelin-starred chef Peter Sanchez-Iglesias, cooks up live-fire Spanish and Mexican dishes in a large, glamorous space on the tenth floor with fabulous 360-degree views, partially obscured by swishing macramé curtains. We had a great meal here, trying sweet, smoky marinated red peppers presented tartare-style (£5), punchy crab and jalapeno aguachile (£22) and beautifully cooked monkfish (£18). The atmosphere was warm and social, and the service, as throughout the property, was friendly and helpful. The gym has Technogym kit and Peloton bikes (a spare bike can be put in eighth- and ninth-floor rooms).

Fantastic to look at and fun to stay in, this is an excellent addition to the London hotel scene, and a good stopover for business travellers catching the Eurostar. Michelle Harbi 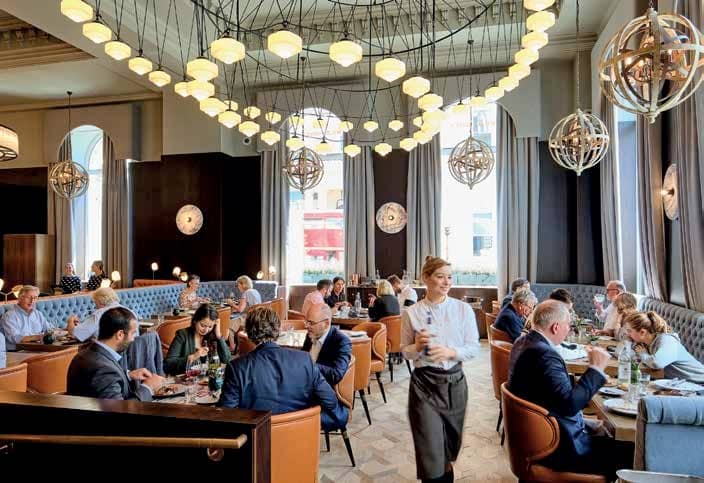 Located on the corner of Pall Mall and Waterloo Place, the Sofitel has been open since 2002, when the Grade II-listed building was converted from a bank. It is now moving towards a refurbishment of all of its rooms (suites are yet to come) by Pierre-Yves Rochon, who originally designed them. The public areas are grand yet understated, and the staff extremely friendly and professional. 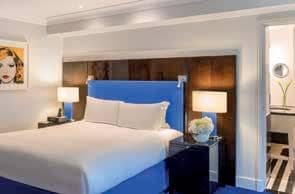 The room count is now 183 (it was originally 166), with entry-level Classics being 23 sqm. There are six floors, and the soundproofing is remarkable. Rochon has gone for “a bold British design scheme that recalls the creative, dynamic feel of the 1960s and 1970s” with “striking colours, modern pop art pieces and whimsical accents and accessories”. There are three colour schemes, green, red or blue. Distinctive chairs are mixed with art deco pieces, which is quite ambitious, while the bathrooms, corridors and public areas are traditional. I think the hotel should get full marks for not treading the same path as other luxury hotels, but I’m not sure all of these different influences gel. 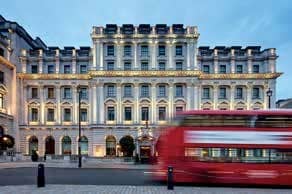 Previously called Balcon, the restaurant is now Wild Honey St James, an evolution of Anthony Demetre’s now-closed Wild Honey in Mayfair. It’s very good – the food is tasty, in good-sized portions and with an imaginative mix of ingredients and influences. My English seabass, wild mushrooms, white beans, cobnuts and thyme and lemon (£35) was delicious. The bar is an attractive place with a wide choice of beverages. The Rose Lounge is very pink, and presumably an exercise in kitsch, with a harpist playing while people had afternoon tea and drinks.

The meeting space can be accessed by a separate door next to the hotel, as can the two-floor spa (there is no pool). The small gym looks a little like an afterthought but is stylishly lit.

A sumptuous renovation, but it is the service and the bar and restaurant that really makes the hotel stand out from the crowd. Tom Otley

Open since November, this property is operated by SH Hotels and Resorts, which also has the 1 Hotels and Baccarat Hotels brands. Treehouse London is the first of its kind, and “has been designed to appeal to the child in all of us… playful, curious, rustic and nostalgic, inspired by simple joys”. It’s on Langham Place, across the street from the BBC and just north of Oxford Circus.