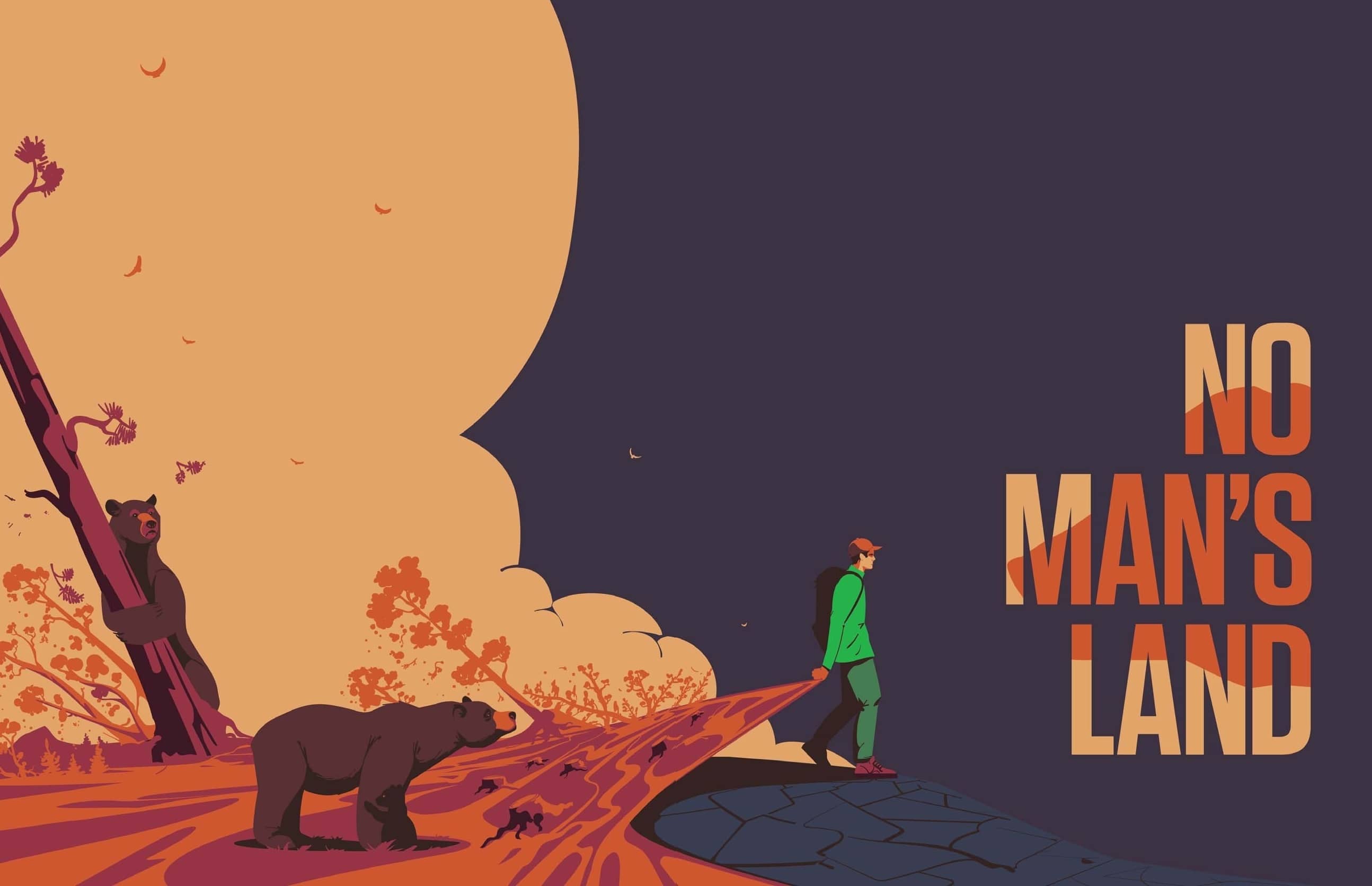 In a remote corner of Montana, hikers and activists clash over the future of a grizzly bear population hanging on for dear life.

THEY SAW THE FIRST sign of bears near dusk, on the way up to their campsite on the broad slope of Davis Mountain in northwest Montana. Levi “Rocks” Mason spotted the track, a five-toed, long-clawed imprint in the garden-rich soil of the trail, dwarfing the span of his hand. A little farther on, when he and his girlfriend, Cara Foley, found a clearing flat enough to pitch their tent in the wildflower-dotted slopes below the 6,000foot summit, they also noticed flipped-over rocks, furrowed dirt, and sizable piles of scat, unmistakable signs of grizzly bears.

The pair considered their options. It was nearly dark, the end of a 23-mile day on the Pacific Northwest Trail through the Yaak Valley. Neither wanted to hike on into the uncertain twilight. So they put up the tent, retreated several hundred yards to an overlook to cook dinner and hang food in Ursacks, like always, then crawled into their bags back at camp.

Mason wasn’t exactly surprised to see evidence of grizzlies in the Yaak. In fact, when prepping for his 2019 thru-hike, he’d heard a podcast about how a local group was fighting to reroute the PNT out of the region because of concern about hikers’ impact on the bears here. Mason had even considered leaving the official trail and hiking around the Yaak. “I love wildlife, and the last thing I want to do is jeopardize wild bears,” he says. When he reached the area, however, he decided that his and Foley’s presence would barely register against the logging activity and ATV trails they saw around them. They pressed on, following the trail.

That night on Davis Mountain, the grizzlies felt close—so close that Mason slept with his bear spray within arm’s reach. But chances were the bear that had been scratching for grubs in their campsite was long gone, fleeing for a spot that might not have the best food sources, but at least was free from humans. Backpackers might fear grizzlies, but to the four-legged inhabitants of these mountains, people are the real bogeymen.

We hikers tend to think of ourselves as the good ones: a quiet, unobtrusive presence in the wilderness that takes only photos and leaves only footprints. By virtue of travelling on foot, the reasoning goes, we impact the places we travel less than anyone else. That’s probably true, but it turns out hikers’ impact is still significant. A variety of studies conducted over the last decade on wildlife like elk, wolverines, coyotes, and bobcats suggests that any human presence—be that on skis, snowmobile, ATV, or even on foot—can change the way animals travel, forage, and live in their home ranges. As more people venture into the wilds, animals are subjected to stress and must expend additional energy to flee from recreating humans, which in turn affects reproduction rates and individual survival.

Grizzlies (despite the camp-raiding, hiker-mauling fears they inspire in some) shy away from people the same way that deer do. Research out of Yellowstone found that bears give backcountry campsites a wide berth when occupied, and other analyses show that grizzlies avoid trails, shift their activity to dusk and nighttime when pedestrians are around, and work hard to distance themselves from any people they encounter.

All that’s particularly notable in the 1,100-square-mile Yaak Valley ecosystem, which stretches across the far northwestern corner of Montana, roughly between the Idaho border on the west, Lake Koocanusa on the east, and British Columbia up north. Thick forests of western hemlock, larch, ponderosa pine, and spruce cover an expanse of glacially bulldozed peaks drained by the lazy Yaak River. Among the extensive logging operations and motorized trail networks, there’s an island of pristine lakes, high-elevation huckleberry patches, wildflowers, and snow-mantled summits. The area is home to just 25 to 30 grizzly bears, roughly half of what biologists would consider to be a recovered and stable population, and now, the PNT.

For decades, the Yaak’s trails have been traveled primarily by a handful of local hikers and hunters. But that began to change with the arrival of the national scenic trail. The PNT spans 1,200 miles of peaks, forests, and backcountry lakes from Glacier National Park’s Belly River to Olympic National Park’s Cape Alava, passing through the likes of Flathead National Forest, North Cascades National Park, and the Pasay ten Wilderness. Sixty-nine of those miles traverse the Yaak on a combination of existing trails (65 percent of the route) and Forest Service roads. First proposed in the ‘70s, the route didn’t notch official national scenic trail status until 2009. The route has been slowly gaining recognition in the 11 years since. In 2014, about 20 people thru-hiked it; from 2016 to 2019, the numbers have held steady at 60 to 70 per year.

One group of local activists, the nonprofit Yaak Valley Forest Council (YVFC), fears the extra hiker traffic this trail might attract would be the last straw for a bear population that already has to contend with logging, encroaching development, and climate change. The YVFC was formed in 1997 over concerns about logging in the area and other threats, working to a contentious stalemate that saw no new logging but no new protected lands, either. Over the past six years, the Y VFC has mounted an increasingly vocal campaign of local and national op-eds, community meetings, and lobbying to move the PNT south, out of the Yaak entirely, for the sake of the grizzlies. They’ve been met by an equally determined group of Yaak locals, some thru-hikers, and the Pacific Northwest Trail Association, which counters that hikers don’t actually pose any threat to the bears and that the YVFC is really just trying to keep people out of its backyard.

Just how much disturbance the Yaak bears—and the rest of the wildlife jostling for elbow room across public lands everywhere—can take remains an open question. But as a growing body of research suggests that we hikers aren’t quite the innocuous force we thought we were, it raises hard questions about where, exactly, we should go for our wilderness fix.

In Yellowstone, where more than 700 grizzlies (in the greater ecosystem) roam 3,500 square miles of protected terrain, park biologists still seasonally close the best bear habitats, such as spawning fish streams and carcass-rich areas, to give grizzles undisturbed access and prevent dangerous encounters. How much more critical might that kind of buffer be when the population numbers just 25?