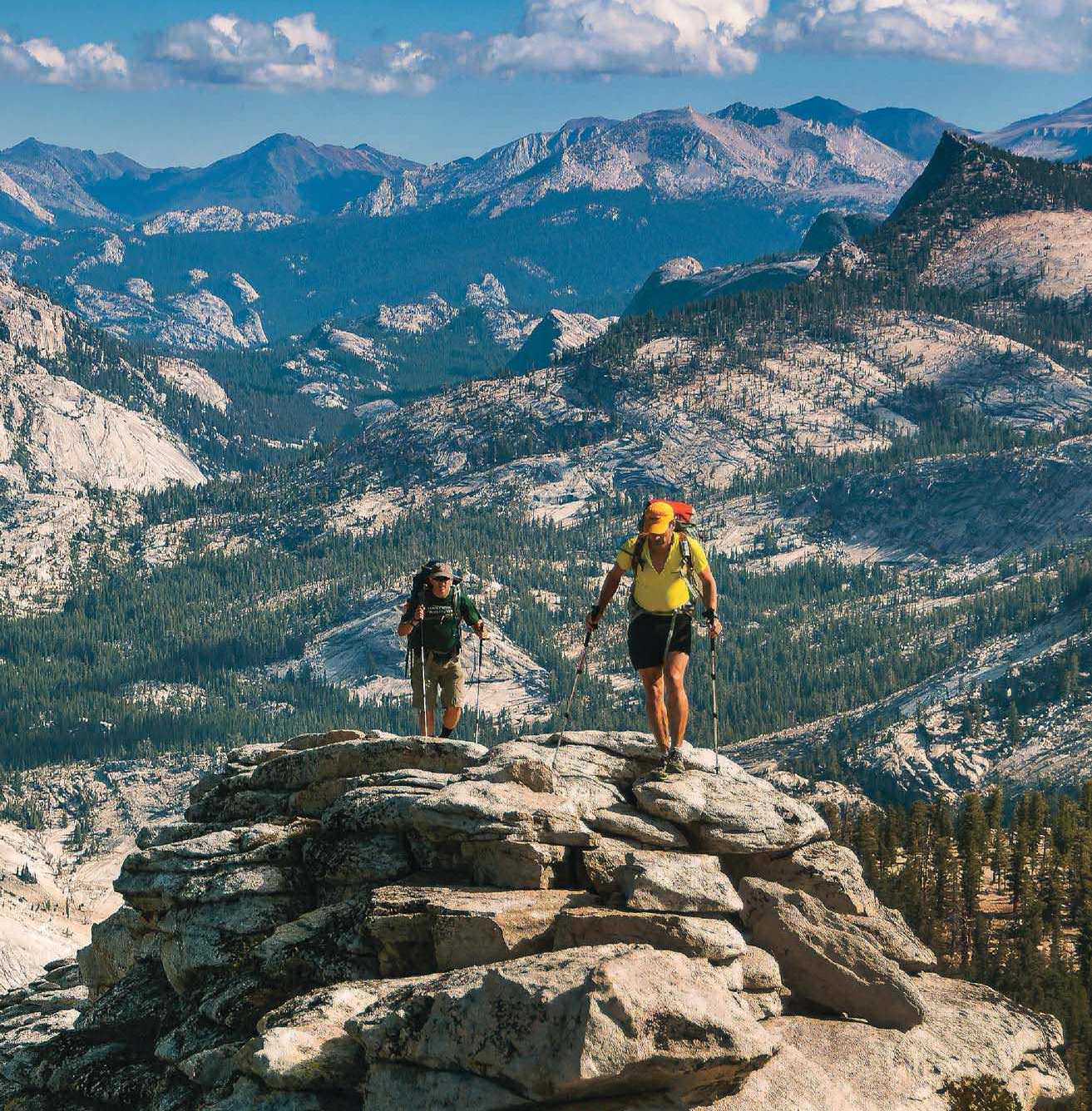 For backpackers, there's nothing better in the entire park system. How much of it can one hiker see in a week?

We’re floating on a granite cloud.

At least, that’s the sensation we get walking across the slender spine of 9,926-foot Clouds Rest, which levitates between sphincter-puckering abysses of deep air in the heart of Yosemite National Park. Below my left elbow, the rock plunges several hundred feet to forest. Below my right elbow, a cliff face sweeps downward a dizzying 4,000 feet— that’s 1,000 feet taller than El Capitan. Half Dome lies just a few miles away and below us—a view that makes anyone with a camera feel like Ansel Adams. Yosemite Valley sprawls a little lower, and, farther off, the Clark Range, Cathedral Range, and the peaks of northern Yosemite slash at the sky.

We can’t help but linger over the vista, which is something considering how rarely we’ll slow down in the coming days. My friends Todd Arndt, Mark Fenton, Jeff Wilhelm, and I are 7 miles into the first morning of a roughly 150-mile hike through most of the vast swath of far-off mountains and canyons surrounding us. First, we’re hiking a 65-mile horseshoe-shaped route south of Tuolumne Meadows, then we’ll resupply and embark on an 86-mile trek north of Tuolumne.

And we’ll do it all in a week.

Todd, Mark, and Jeff share my enthusiasm for hiking distances that most people associate with forced marches or bird migrations. But don’t accuse us of “rushing through the wilderness.” We’re not actually moving much faster than an average backpacker. But by starting early, traveling light, and stopping late, we can hike long days in relative comfort. And our motivation is easy for any backpacker to understand: We want to see as much of this park as possible in the time we have.

After all, Yosemite is not just any flagship national park—it helped jump-start the very idea of national parks. You could say this is where today’s 84 million-acre National Park System began. In 1864—eight years before the designation of Yellowstone—President Abraham Lincoln signed a law granting Yosemite Valley and the nearby Mariposa Grove of giant sequoias to the state of California to protect. They were the first land tracts preserved by the federal government purely for their scenery, a novel concept at the time. In 1890, Yosemite became America’s third national park, a week after Sequoia.

When asked occasionally which national park is the best for backpacking, I naturally say it’s impossible to pick just one. As someone who’s left bootprints not just here but in Glacier, Grand Canyon, Grand Teton, Yellowstone, Sequoia, Kings Canyon, Rocky Mountain, Mt. Rainier,Olympic, North Cascades, Acadia, and Denali, I know the competition is stiff.

But if pressed, I’d venture that Yosemite in September deserves number one. Beyond iconic hikes like Half Dome, innumerable, lesser-known spots like Clouds Rest will completely recalibrate your natural-beauty meter. Then pile on the park’s inspirational history, the logistical convenience of free trailhead shuttle buses in the high country along Tioga Pass Road, and a permit system based on trail head quotas instead of nightly campsite designations (giving you flexibility to choose how far to hike each day and where to camp each night). Finally, top it off with the bug free, reliably sunny days of late summer and early fall. With all that going for it, you’d think the Yosemite backcountry would be teeming with people. But the park’s infamous crowds stick to the tourist-friendly Valley and a few of its trails, like the Mist Trail and Yosemite Falls.

Case in point: We’re alone on the summit of Clouds Rest, with easily one of the best views in the entire park. The only problem with our vantage is that we can see our entire route, and the audaciousness of our plan sinks in. I wonder whether our 20-plus-miles-per-day itinerary may be overambitious for Yosemite’s punishing contours. I stare out at the Clark Range in southeast Yosemite, which suddenly looks very, very far away. We plan to cross it—tomorrow. Then I spin 180 degrees and look out at the peaks on the northern boundary of Yosemite. They look even farther away in the opposite direction. And we’re supposed to reach them in . . . well . . . three days.

I swallow hard. From Clouds Rest, it looks like we’re just a few bites into eating a whale, and I’m suddenly feeling queasy.

Scaling Half Dome is a rite of passage for Yosemite hikers, so even though we’re just halfway through a monster day that won’t end until dark, we’re going up it. Beneath a clear sky, gusts of wind buffet us as we haul ourselves up the cable route, climbing several hundred vertical feet of severely angled granite.