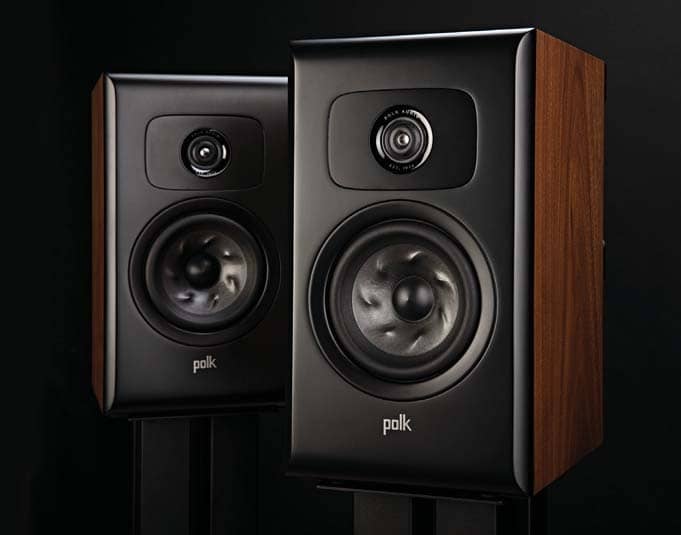 With these absences comes something unique to my downtown experience: peace and quiet. As I write this, in early June, the streets are mostly empty, birdsong seems pleasantly amplified, and my neighbors seem more relaxed and convivial. The famous 93-year-old Caffe Reggio, whose customers have been moved out to the street in obeyance of the city’s Phase 3 reopening rules, can breathe.

This diminution of noise and increase in quiet makes high fidelity listening to a more relaxed indulgence. I can immerse myself in listening, for work and pleasure, to a degree that seemed impossible here a few months ago. Into this solace and sanctuary comes the Polk Audio Legend L100 book shelf speaker ($1199/pair).

When Polk Audio was founded, in Baltimore, Maryland, in 1972, I was barely a teenager, but I already considered myself an audiophile. My audio buddies lusted after (and occasionally possessed) brands such as NAD, KEF, Phase Linear, Bang & Olufsen, and JBL, including its famous L-100 studio monitor. In those days, Polk Audio’s hyphenless L100 loudspeaker was still decades in the future, but company founders Matthew Polk, George Klopfer, and Sandy Gross (who later founded Definitive Technology and GoldenEar Technology) began their company by designing a PA system for a bluegrass concert.

The first Polk Audio loudspeaker, the Model 9, arrived in 1973, followed soon after by the two-way Monitor 7 and Monitor 10. Both of those featured 6.5 mid/bass drivers with rubber surrounds and passive radiators. Many followed. Polk’s design patents piled up, including the one for SDA (Stereo Dimensional Array), which fed a modified version of the left-channel audio to the right channel and vice versa and was important in later models. The company grew and, in 1986, held an IPO. Production moved from Baltimore to Mexico. At one point, Polk almost bought the holding company that owned KEF. That didn’t work out, but they grew, entered the automotive and home-theater markets, and won distribution in Best Buy stores. In 1999, they went private again and in 2007 were bought by Sound United, which also owns Denon, Marantz, Classé, and several other brands, including one of Sandy Gross’s other former companies, Definitive Technology.

The L100 and its larger sibling, the L200 ($1799/pair), are part of Polk’s highest-priced “Legend” series, which the company describes as the “Best Speakers Polk Has Ever Made.”

The two-way, ported L100 stands 13.6 high × 7.8 wide × 11.3 deep. Its sensitivity is specified as 85.5dB/W/m, its nominal impedance as 3–4 ohms. The recommended amplifier power is 70Wpc. Its driver compliment is a 1 “Pinnacle Ring Radiator” tweeter and a 5.25 “Turbine” polypropylene-cone mid/bass unit, crossing over at 2.9kHz via an “Orth” crossover, named for Polk Audio’s Scott Orth, an engineer who has been with the company since 2000.

“All Polk loudspeakers and drivers are designed and spec’d by Polk engineering, including entry-level products, in Baltimore, Maryland, and Vista, California,” Bronson Gannon, Polk’s global marketing manager, told me in an email. A team of about 40 engineers also do all the company’s mechanical and acoustic research, including crossover development, transducer design, development, and testing. The industrial design is done in Vista, near San Diego. The Legend-series speakers are built in China.

The L100’s Pinnacle ring-radiator tweeter is constructed of low-mass, hard rubber, with a center waveguide/phase plug that resembles a small Hershey’s Kiss; the Kiss is claimed to improve the tweeter’s dispersion for a bigger sweet spot. (The tweeter is also slightly recessed with a waveguide—a sort of shallow horn—around the circumference.) An internal copper cap behind its ring-radiator diaphragm ostensibly reduces “inductance and flux modulation” to increase high-frequency output and lower distortion; the quote is from a diagram provided by Polk. The tweeter is sealed in its own chamber, which is filled with damping material, suppressing a resonance at 2.5kHz, just below the crossover frequency.

The L100’s 5.25 mid/bass driver’s “foam-core polymer injection cone,” which is imprinted with seven evenly spaced ridges, is described in a Polk white paper as having a “chewy center” and a “crunchy outside.” “We wanted to dramatically improve imaging and mid-bass” performance, so they redesigned the mid/bass driver used in the LSiM series, Gannon explained: “This is the third generation of this cone. The challenge is to cost-effectively develop a cone that is well-damped, stiff, and very lightweight. The Turbine core is made of aerated polypropylene. We changed the formula [of the cone], improved the [internal] foaming, and added the ridges that give it the turbine shape. The ridges add stiffness, and the [internal] foaming added dampening, both without adding mass.” The surround is made from nitrile butadiene rubber.

The L100 cabinet is constructed of MDF that varies in thickness from 1 to 1.5 and is “extensively braced,” Gannon noted. It is finished in real wood veneer. “We used a laser vibrometer to analyze cabinet resonances.” The mirrorlike piano-black finish of the L100’s baffle is achieved by layering five coats of paint and clearcoat, buffed and polished between coats. Stretchy black grilles affixed by magnets were provided, but I didn’t use them.

The L100’s rear-firing port is unusual. Screwed to the back of the L100 cabinet, the “Enhanced Power Port” features a central diffuser similar in shape to the tweeter’s Hershey Kiss but pointing in instead of out; it was designed to reduce chuffing at high volumes and diffuse air from the port tube to “more evenly distribute bass frequencies and aid in easier speaker placement,” Gannon said. The whole structure looks a bit like a flanged heatsink, measuring 8 × 8 × 1.5.

Polk recommends toeing in the L100s to point directly at the listener, forming an equilateral triangle with the speakers and your listening chair at the vertices. I plopped the L100s (on their oblong rubber feet) on my 24 wooden Target Audio stands and eventually, after some testing, sited them about 3 behind the blue-tape outline John DeVore left when he installed the DeVore Fidelity O/93s in my room, 32 from the front wall. I found that the L100s sounded best placed 71 apart, tweeter to tweeter, 61 from my listening seat. That is where I left them.