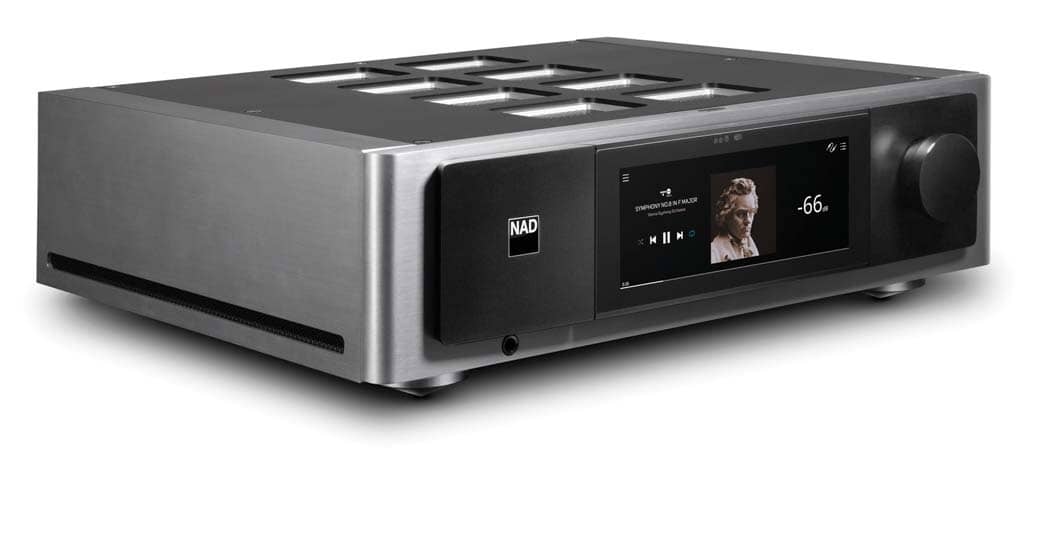 On the cold and sunny morning of February 19, 2020, a dozen or so audio critics and writers gathered at Gilmore’s Sound Advice on New York’s far West Side to see some new NAD and DALI products that had been unveiled the prior month at CES. It was a friendly group, and we kibitzed over coffee before clustering in the arranged seats for presentations and auditions. I doubt any of us realized that it would be the last time for the foreseeable future that we would experience this familiar rite.

I vividly recall walking back to Times Square with John Atkinson while talking about amplifiers and expressing how impressed I was with the NAD M33 from its specs and the demo. He had reviewed the M32,1 with its optional MDC DD BluOS module and “DirectDigital” topology, and more recently, the M102 with integrated BluOS and “Hybrid Digital” amplifier. Both of those amps were NAD developments, with the former accepting a digital signal at its input while the latter requires an analog input.

The new M33 seems like the culmination of this progression, with a fully integrated BluOS streaming platform, sophisticated control and input/output options, and new power amplifiers based on a patent-pending class-D technology developed by Bruno Putzeys, the mind behind today’s almost ubiquitous nCore power amplifiers.

At Munich High End 2019 in May of last year, NAD “announced that it will be the first international brand to incorporate and launch Purifi’s new patent-pending class-D technology into its product family. The amplifier circuit, known as Eigentakt (meaning “self-clocking”), is the result of years of research by Purifi into the self-oscillation behaviors in class-D amplifiers with algorithms that, when applied in control loops, improve existing designs by an order of magnitude or more. … [T]he Eigentakt circuit is expected to outperform any audio amplifier known, regardless of technology or class, with THD and IMD quoted as below 0.00017% at all frequencies and power levels.” In the audio band, the frequency response is claimed to stay “within ± 0.01dB under all load conditions.” I will not say I got sweaty palms that cold morning in February, but I knew I had to get those palms on an M33.

The M33 comes packaged like other NAD Masters Series products: in a double-insulated case with two trays of small parts and accessories. The single page of setup instructions is sufficient, with diagrams that show you how to connect the speakers, your LAN (wired and/or wireless), and your AC power and how to turn it on. Everything else can be done from the generous and clear touchscreen on the front of the M33 and the large, smooth volume control knob on the front panel.

That touchscreen is a delight for ongoing playback operations, but I find finger-poking horizontally through setup menus on a vertical screen tedious. Fortunately, there are other ways to set things up, such as the BluOS app I installed on my iPhone; you can also use an iPad or a laptop. Android devices work, too.

The back panel confirms that the M33 is much more than a streamer: It accepts input from virtually any type of device one might want to use in a modern stereo system. Digital inputs via optical, RCA, and XLR handle PCM up to 24/192, and the BluOS system will play PCM files from a USB drive plugged into the rear-panel USB port. RCA and XLR inputs accept analog audio, and there’s a phono input for MM and MC cartridges, although they, like the other analog inputs, are digitized with 24-bit resolution and a sample rate of 48, 96, or 192kHz. The M33 even has an HDMI/ARC input that extracts the audio from the HDMI/ARC connection of your smart TV, so you can accompany your TV’s video with the M33’s high-quality sound.

The M33’s heavy processing is handled by an NXP 1GHz ARM processor running in a Linux-based operating environment. Digital-to-analog conversion is performed by an ESS 9028PRO Sabre DAC. In addition to the main speaker outputs, the M33 has a headphone jack driven by a dedicated analog amplifier and line-level stereo RCA jacks as well as a pair of similar jacks for subwoofers. Wireless (Bluetooth aptX HD) streaming to speakers and headphones is also on tap. BluOS will control and synch other BluOS devices with the M33.

For the power-mad who can never get enough, there is a switch to bridge the two channels into a >700W mono monster, and the line outputs allow you to add an external matching amp or two. (Do you think that NAD has something like that in the works?) Why two subwoofer outputs? NAD says that they are there to support the “Bass Control” function in Dirac Live3, but, at the time of this review, that advanced feature had not yet been implemented. Speaking of the future: There are two empty MDC slots for expansion modules, although it is hard to think of anything the M33 lacks. 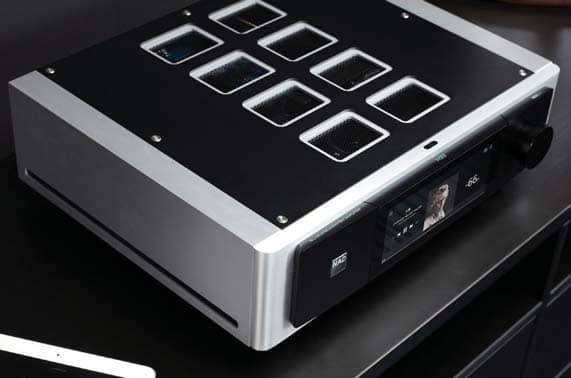 How does it work?

With BluOS as its default streaming platform, the M33 is virtually a plug-and-play music system. Once you point BluOS to your music files, or log in to your favorite streaming services, or both, you have a world of music at your fingertips. After I did that, BluOS scanned the files on my NAS and added them to its library in minutes. More than a dozen streaming services are supported; I signed in to my Qobuz and Idagio accounts with ease.

The Roon core elsewhere in my system sees the M33 as an endpoint; because I’m so familiar with its user interface, I usually found it easier to browse and play stereo PCM files with Roon. Another advantage to using Roon to access music is that Roon will play files BluOS ignores, multichannel PCM files with resolution greater than 24/96,3 and all DSD files.4 I could not perceive any audible difference between playback from BluOS and playback from Roon.

With the M33 playing the source files on my NAS or on the cloud directly to the Revel Studio2 speakers, the sound was impressive. I did not notice any compromise in tonal balance, transparency, or dynamic performance compared to the streamer, DAC, preamplifier, and power amplifiers—that’s five components for stereo—that it replaced. Even when I fed the M33’s balanced analog inputs with the aforementioned streamer, DAC, and preamp, adding an unnecessary round of A/D/A conversions, I could discern no consistent degradation in the sound. Still, why would anyone do that?

Here’s why: The M33 also offers Dirac Live 3 LE. Because the analog inputs—including the phono inputs—are digitized, Dirac Live’s optimization features can be used even with an analog source.