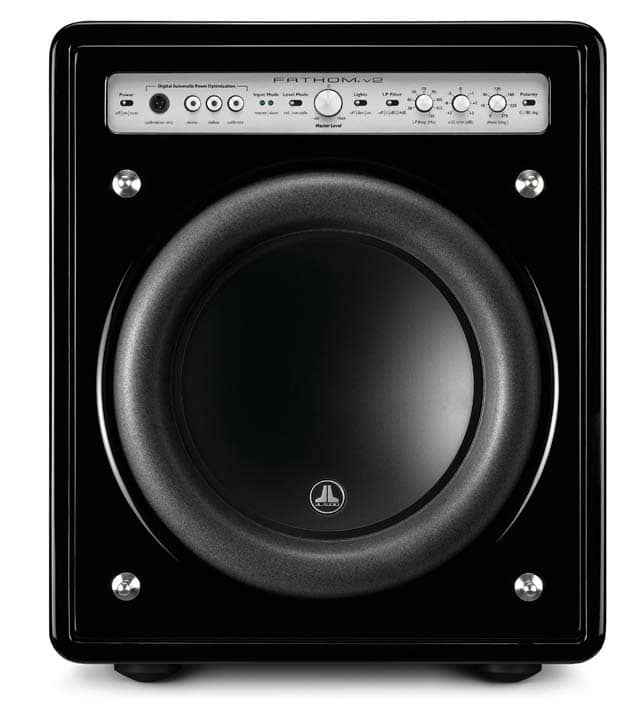 Some contentious issues will not be resolved in my lifetime: vinyl vs. digital, tubes vs. solid-state, subjective vs. objective, streaming vs. physical media. Also, subwoofers vs. no subwoofers in a stereo music system.

Setting aside the issues of cost and space and domestic tranquility and considering only the quality of the musical experience, I believe a subwoofer, or a few, should be a basic component of any modern audio system.

Regardless of the size and range of yours, loudspeakers—the main ones—are always positioned for optimal tonal balance and imaging based on their on-axis frequency response, off-axis dispersion, and the interaction of those parameters with a room’s reflective surfaces. Optimizing low bass presents completely different challenges: Sources of low bass should be positioned to optimize interaction with low-frequency room modes, which in turn depend on the room’s dimensions and shape. (Low bass is not involved in imaging, and in the low bass, “direct sound” is not even a useful idea.)

Except by chance or in a few purpose-built rooms—not all of them—there is no common solution to both tasks: no single spot that’s best for low bass and the rest of the audible frequency range. The addition of subwoofers allows independent solutions to a music system’s high- and low-frequency needs: You can position the subs independently of the main speakers, putting each in the position that works best. The possibility of incorporating several subs, each a different location, adds to this advantage.

Smaller speakers with limited low-frequency output can of course benefit from the addition of subwoofers because the subwoofers’ range extension helps balance the highs for a more optimal frequency response. Plus, the diversion of low frequencies to (typically powered) low-frequency drivers reduces the load on the main power amplifiers, which can improve system performance.

Finally, in contrast to passive speaker systems, most powered subwoofer systems incorporate DSP-based equalization in modern subwoofers—so now you can control both frequency response and—by moving the subwoofers around—which room modes are energized the most.

Working against this are mainly practical issues: Powered subwoofers tend to be large and take up space. They need to be plugged into the wall—which means an extra power cord for each one—so, all-in-all, subwoofers are not that room-friendly. High-quality subwoofers can be expensive—though probably cheaper than comparable extension in a high-quality full-range loudspeaker.

And yet, subwoofers make it possible to extend the bass to very low frequencies in a controlled and musically satisfying manner. High-quality deep bass can make a big difference in the quality and character of the listening experience.

JL Audio has been near the forefront of mobile and home subwoofers for decades. The f110v2 I’m reviewing here is the smallest model in their most advanced class. 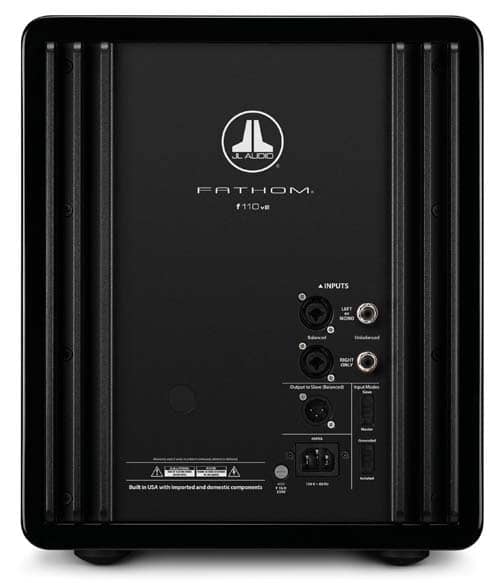 At roughly 16 × 13 × 17, the f110v2 isn’t large, but via its W7 driver and internal 1.1kW class-D amplifier, it can move a lot of air. Its small size makes it possible to employ several in a room, multiplying the output power and, by exciting the room from more than one location, have more control over which room modes are excited, compared to what could be achieved using a single, larger subwoofer of equivalent power. The result is, potentially at least, more even low frequency response in real-world rooms.

The f110v2 incorporates the latest, multiband version of JL’s Digital Automatic Room Optimization (D.A.R.O.) processor, which uses internal signals and a provided microphone to correct for irregularities in a frequency response that result from room resonances and the subwoofers’ positions. D.A.R.O. can be used independently on each sub, or you can daisy-chain the subs together and equalize le tout ensemble.

As I unpacked the f110v2, I was impressed, as I have been before with this company, by the competence and practicality of the packaging. Even this relatively small sub is quite heavy, and yet a single person of no more than average strength can unpack it by inverting the box, sliding the sub onto carpet or a rug, then reinverting it to “walk” it into position.

The f110v2 is impeccably finished. As with its big brother, the f113v21 , left and right XLR and RCA inputs are on the back, nestled between massive heatsinks. There is an XLR output to connect another sub as a slave, two input mode switches, an IEC-style AC input, and a fuse post.

The typical controls and indicators are at the top of the front panel: power/standby; microphone input; illuminated Demo/Defeat/Calibrate buttons for the EQ; input-mode LEDs; a level-mode switch; the master level control; a switch for dimming or turning off the LEDs; a low-pass filter switch; low-pass frequency/ELF level2 /phase controls; and a polarity switch—all behind a sturdy, well-fitting (and removable, obviously) front grille; when lit, the LEDs can be seen when the grille is in place.

What has changed since the Fathom series’s early days is how capable the system is. Original, v1 Fathoms had a single band of parametric EQ, which sought to correct only the room’s most aggressive mode. Current, v2 Fathoms, like the f110v2, have 18 parametric EQ filters operating in a range from 25Hz to 130Hz.

There’s little doubt or controversy about the advantages of having several subwoofers instead of just one; recommendations for placement vary; practical issues tend to play a big role. Like many people with home systems, placement in my room was limited by the room’s shape, the position of furniture and other audio equipment, and the need to have the subs be as unobtrusive as possible—and to have an electrical receptacle nearby. Still, I had some options:

I could use one f110v2 on the front wall, placed behind and between the front right and center speakers and about one-quarter of the distance from the side wall;

I could add a second f110v2 on the left sidewall about one-third of the distance from the front wall;