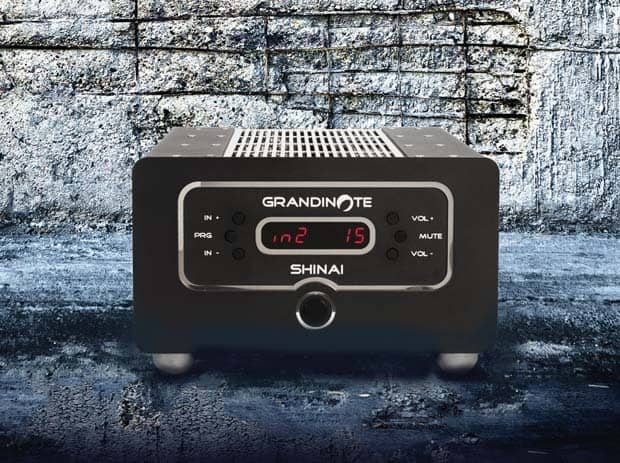 I was doing my press beat for Stereo-phile in the hallway of Montreal’s 2019 Audiofest when I glimpsed something that stopped me in my tracks. It was a marketing slogan, across the room on importer/exhibitor Goerner Audio’s floorstanding banner: “Tubes or semiconductors? Magnetosolid technology amplifies emotions.”

Intrigued and with pen and paper in hand, I settled into one of the listening chairs and soaked in the smooth, luscious, musical sound coming from a system with the Grandinote Shinai integrated amplifier at its core—and wondered: tubes or transistors? The line was blurry.

I’d never heard of Grandinote, whose electronics have an unobtrusive, elegant look that sets them apart from the typical fare. The man helming the room— Goerner Audio’s amiable Reinhard Goerner—clued me in. Designed and manufactured in Italy, Grandinote products are exported to 32 countries. The Shinai is a special breed of integrated: a solid-state amplifier that uses a tube-based circuit.

I have since heard Grandinote products demoed at two other shows. At the last of these, Toronto’s 2019 Audiofest, the Grandinote integrated was being fed music files from a Grandinote server, feeding, in turn, the unusual, sensitive, crossover less Grandinote Mach 9 loudspeakers. I wrote,1 “My journalistic objectivity be darned! The Goerner Audio/ Grandinote room produced the sort of sound that melts my heart, ravishes my senses, and reminds me of why great hi-fi is worth the money.”

Grandinote founder and product designer Massimiliano Magri—Max to his friends—grew up in a small town in northern Italy’s Lombardy region in the province of Pavia, whose namesake capital city, in 452 CE, was sacked by Attila the Hun.

As a child, Magri told me, he played a game where he tied links of string between pieces of furniture to simulate an electrical circuit. A few years later, he had earned a degree in electronic engineering from the University of Pavia, less than an hour’s drive from Milan, and had built his first amplifier, a tubed unit that featured his first output transformer. Output transformers became one of Magri’s fascinations.

In time, he decided it’s the most critical part in an amplifier, because of how hard it is to build a really good one and because it’s the interface between the amplifier and the speaker. I asked him if that meant that it was the most critical part, soundwise. His answer: Context matters. Design matters. “It’s stupid to think that the best output transformer is the secret sauce. It’s like the guys who buy the most expensive drivers and think they make the best speakers. Both the drivers in the speaker, and the output transformer in the amplifier, need to work for a specific project.”

Magri’s studies of output transformers would be the foundation for his invention, at age 29, of “Magnetosolid technology,” a portmanteau of “ferromagnetic” and “solidstate.” The invention led to a transformer made to work with a tubed circuit, minus the tubes, that could deliver the high bandwidth, low impedance, and bass solidity of a solid-state circuit but also the rich tone tube designs are known for. That richness, he was convinced, was due not to the tubes themselves but to tube circuits that abide by the same simpler-is-better ethic that informs the design of the Grandinote Shinai.

The Shinai is an integrated, push-pull, dual-mono amplifier specified to deliver 37Wpc into both 4 and 8 ohm loads, entirely in class-A.

How dual mono is it? It is so dual-mono that a power cord is needed for each channel. Ba-da-tish!

The stylish, flat-surfaced front panel has no protruding toggles or knobs—just a symmetric array of seven pushbuttons: three on the left for inputs and programming, three on the right for volume setting, and a big one in the middle, at the bottom, to power the unit on and off.