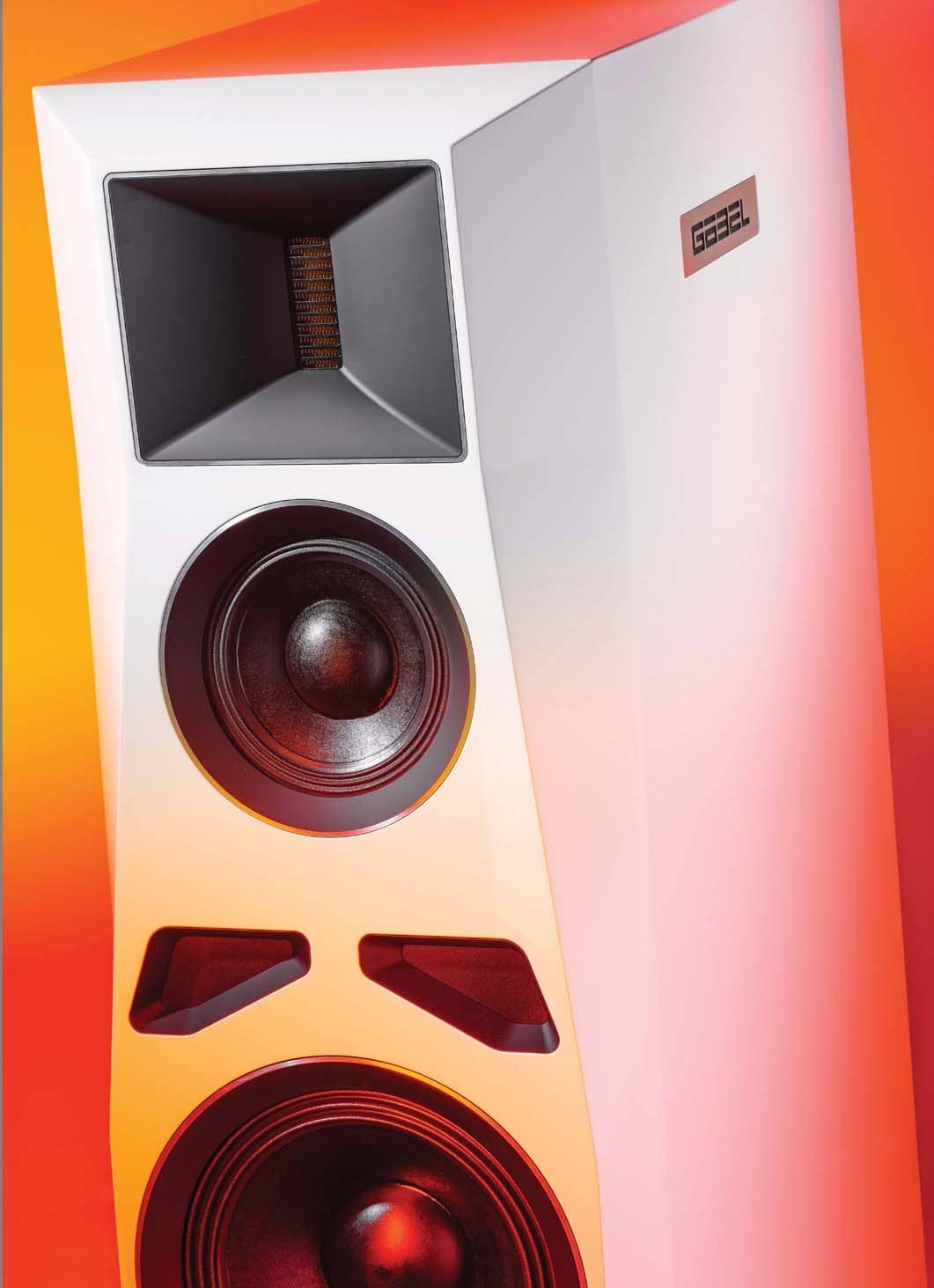 Price $80,000/pair in standard finish. An approximate number of dealers: one at the time of writing. (North American distribution plans were interrupted by the COVID-19 pandemic.) Warranty: 5 years parts and labor.

Although it was founded by ex-Siemens loud-speaker engineer Oliver Göbel in 2003, I am embarrassed to admit that I had never heard of Göbel High End until I visited the room hosted by Florida retailer Bending Wave at the 2019 AXPONA.1 There, I listened to the German manufacturer’s ginormous $220,000/pair Divin Noblesse loudspeakers, which were making their US debut. I was impressed by what I heard. I was interested, therefore, to learn that Göbel was introducing a smaller Divin model, the Marquis, which would not be too large for my listening room and would be priced at $80,000/pair.

Smaller it might be than the Noblesse, but at almost 4' tall, 16 wide, and 29 deep (with its binding posts), and with its high-gloss finish, the Divin Marquis still has a physically imposing presence. And at 330lb each, it is by far the heaviest loudspeaker I have had in my room. I asked designer Oliver Göbel via Skype why the Divin Marquis was so massive. “The front baffle is 75mm-thick polyurethane … normally used in machinery shops for [supporting] the tools. This material is extremely rigid and has a high mass, but it also has a very nice damping behavior at certain frequencies. The rest of the [constrained-layer damped] enclosure is a melamine-bonded fiber material. It has a very high density of 1.1kg/liter (MDF has a density of 0.6kg/liter), and it’s extremely rigid.”

What strikes the eye first when you see the Divin Marquis is the relatively large (3.5 tall × 1.5 wide) AMT tweeter, which is acoustically loaded with a waveguide machined from aluminum. This waveguide is more than 2 deep and has what appears to be a Tractrix flare. “It’s not a pure Tractrix curve progression,” Göbel explained. “We tried a lot with different angles and different curve progressions [to best match the dispersion of] the midrange driver.” The tweeter is sourced from Mundorf but is modified extensively for use in the Marquis to allow the crossover frequency to be set at a relatively low 1.6kHz.

Mounted below the tweeter is a fairly large, 8 midrange unit with a copper-coated aluminum voice-coil wound on a glass-fiber former and powered by a neodymium magnet. Oliver Göbel said that this is the key driver in the Divin line: “It was developed and enhanced based on our bending wave technology and knowledge in order to better control resonances. … It has a special cone geometry and dust cap, a special surround, special coatings on the membrane and surround/spiders, specific glues.” 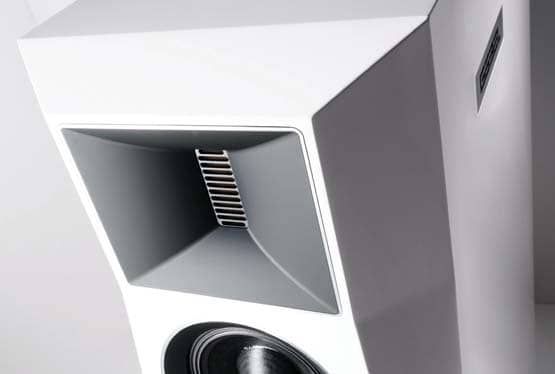 The midrange unit has a shallow, flared waveguide and is loaded with a sub enclosure that has nonparallel walls to minimize air-space resonances. The driver’s cone is made from paper impregnated with Kevlar fibers, with multiple surface treatment on both the front and back. It is terminated with a corrugated surround rather than the usual half-roll rubber type.

The 12 long-throw woofer takes over below 140Hz. It uses a treated-paper cone impregnated with carbon fiber and also uses a corrugated surround. I asked Göbel why he had chosen this kind of surround. “With the right coatings, the lossless behavior is much better for this kind of surround,” he responded. “Normally, the disadvantage of this surround is that you have resonances, especially for the midrange driver.” (Such resonances are due to the reflection from the surround of the wave traveling through the cone, due to the mechanical impedance mismatch.) “We solved this with coatings on the surround [to get] a progressive damping behavior.” 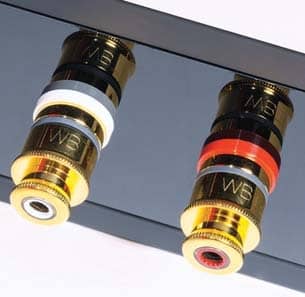 The woofer is loaded with four triangular ports symmetrically placed around its circumference. “We put a lot of work into our bass-reflex alignment of the bass enclosure,” Göbel explained. “We came up with an asymmetrical arrangement of the bass reflex ports and a symmetrical internal enclosure design … in order to provide a symmetrical air load on the back of the [woofer cone, which] prevents the membrane from wobbling.” He went on to explain that he was not a fan of using a lot of damping material in the enclosure. Instead, he uses an internal Helmholz resonator, heavily stuffed with damping material to control the first standing wave in the woofer sub enclosure. The Helmholtz resonator is coupled to the internal volume with a 3cm-thick layer of ceramic foam—“this tightens up the bass.” 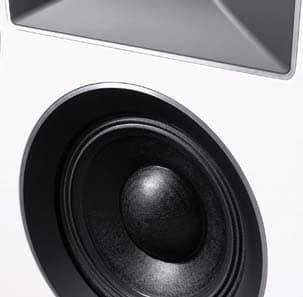 All three drive-units are made exclusively for Göbel High End. The crossover uses high-quality parts from Mundorf and Duelund, with multiple in-house, epoxy-resin vacuum impregnation steps, and is mounted in its own sealed sub enclosure. This is sealed with epoxy resin and mounted to the enclosure on decoupling “silent blocks.” The internal wiring is based on Göbel High End’s Lacorde Statement cables, and electrical connection is via two pairs of WBT binding posts. (A single-wired version with one pair of binding posts is also available.) 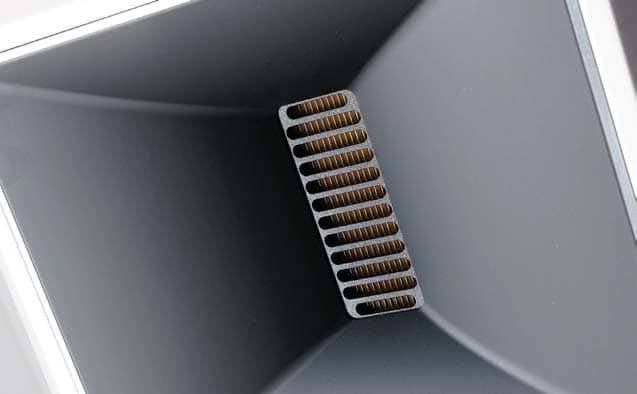 Bending Wave USA’s Elliot Goldman assures me that he will require Göbel dealers to commit to delivering and setting up the speakers in order to be able to sell them. This was not possible with the review samples, however, as we were still in Phase One of New York’s COVID-19 lockdown. I was on my own.