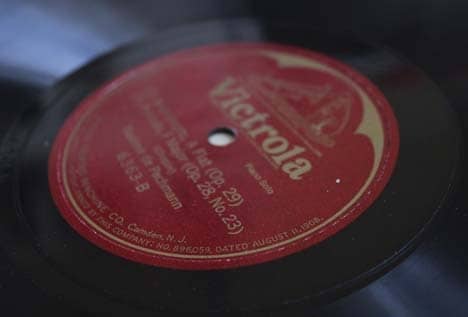 Communing with immortals “Future generations will be able to condense into the brief space of twenty minutes the tone pictures of a lifetime—five minutes of childish prattle, five moments embalming the last feeble utterances from the death-bed. Will this not seem like holding veritable communion with immortality?” —BERLINER GRAMOPHONE COMPANY CA. 18771

Patented by German-American inventor Emile Berliner in 1887, the Gramophone,2 which later became, generically, the small-g gramophone, is a device for making permanent, direct-to-flat-disc3 recordings—of the human voice, musical instruments, or other sounds, and for playing back those stylus-inscribed discs, enjoyably, with sounds that resemble those of the original event.

Today, more than 120 years after that invention, people around the world still listen to voices and musical instruments reproduced via radially inscribed flat discs. The vividness of their effect still feels like a communion with immortals.

Most months, I begin my review explorations not by reading published specifications or absorbing manufacturer-website hyperbole but by using the component I’m auditioning to appreciate whatever music I am obsessing about at the time. This month, I was obsessed by the piano recordings of Vladimir de Pachmann, a pianist whose early–20th century performances of Chopin feel like a communion with impassioned Romantic-era pianism.

Inspired by a friend’s Facebook post showing the red label of a Victrola 78rpm disc, from August 11, 1908, that featured de Pachmann playing Chopin Impromptu No.1 (Op.29) and Prélude SIRI No.23 (Op.28), I started listening to every de Pachmann recording I could track down. I got stuck on and began repeat-playing an audiophile-quality 1967 Everest LP that I found, long ago, in the back room at Academy Records here in New York City: Vladimir de Pachmann Plays Chopin (Everest LP X-921). This modern de Pachmann disc contains a September 9, 1923, performance of the Chopin Op.29 Impromptu and another of the Op.28 Preludes.4

Born in Odessa, Ukraine, in 1848, de Pachmann died in 1933, so the majority of his performances were recorded acoustically to Berliner discs or on paper-roll transcriptions made on Welte-Mignon or Aeolian Duo-Art recording pianos. An Aeolian piano was used to record the performances featured on the Everest disc.

The Aeolian Company’s Duo-Art piano recording system was introduced in 1913 to compete with the Welte-Mignon recording system, which had been introduced in 1905, and the American Piano Company’s Stoddard-Ampico system, which was launched around 1911.5 Aeolian arrived late to the roll-recording scene, but immediately its Duo-Art System was regarded as the most advanced of the three systems because it more accurately recorded and reproduced the speed, dynamics, pedal effects, methods of attack, shadings, and nuance of the original performance. During the 1920s, Steinway incorporated the Duo-Art System as an option on some of its pianos.

Everest Records used a restored 1929 Steinway/Duo-Art piano to recreate de Pachmann’s ethereal pianissimo while capturing its sound with three calibrated AKG omnidirectional microphones feeding a Gauss Electrophysics “focused gap” recorder, allowing de Pachmann aficionados to experience the paper-roll master in audiophile-quality stereo. If this is not communing with immortals, what is?

Because most headphones employ sensitive, full-range drivers with high, flat impedances, a dozen volts, less than half an amp, and only a few watts will power any of them to 100dB sound pressure levels, at low distortion. We can drive them with low-power, single-ended tube amps without fear of clipping or excessive second-harmonic sauce. An amplifier like the single-ended Auris Nirvana headphone amplifier/preamplifier, which is specified (with optional 12AX7 driver) to produce a maximum of 6Wpc into 32 ohms, might accidentally fall asleep while driving the 32 ohms, 106dB/mW, Focal Stellia closed-back headphones. The Stellia have replaced Focal’s Clear as my new daily-driver reference headphones. For weeks, I’ve been using them to dream with Vladimir de Pachmann, Bob Marley, and Ennio Morricone.

I wish you could all experience how naturally toned, corporeal, and exquisitely animated this 1967 Everest recording of that 1923 de Pachmann performance sounds. With the Auris Nirvana amp and Focal Stellia headphones, Chopin’s Op.28 Prelude seemed near-perfect, soundwise: clear, solid, three-dimensional, and engaging. The piano sounds I experienced with this combination felt like urgently coded messages, direct from Chopin and de Pachmann, speaking from another place and time.

What I am describing here is a haunting, solitary musical experience, one that would be easy to replicate in anybody’s home at way less than CEO prices. The Focal Stellia headphones (described below) cost $2990, and the Auris Nirvana amplifier costs $5799. I know, I know, my Dr. Feickert Blackbird turntable with Jelco TK-850L arm and Grado Aeon cartridge is not free—it’s about $17,000 including the Parasound JC 3+ phono stage—but the glories of its sound make it seem to me like a bargain to me.

With the Dr. Feickert record player spinning the Everest-Pachmann LP, the Auris tube amplifier drove the Focal Stellia closed-backs in a manner I would describe as straightforwardly neutral and well-controlled but also glowing and magical.

Upping the ante—seeking an even higher high—I played that Chopin Prelude again, this time with the Auris amplifier powering my reference JPS Labs Abyss AB-1266 Phi TC headphones ($4995). All I achieved, compared to the Focal Stellia, was a more conspicuously open sound with a bit more solidity and more scintillating transparency. With the 47 ohm, 88dB/mW Abyss Phi TC, the Nirvana amplifier displayed dark, silent transparency and a restrained sense of force and density. I was in awe of how microscopically detailed the Aeon (Dr. Feickert)-Nirvana-Abyss partnering was.