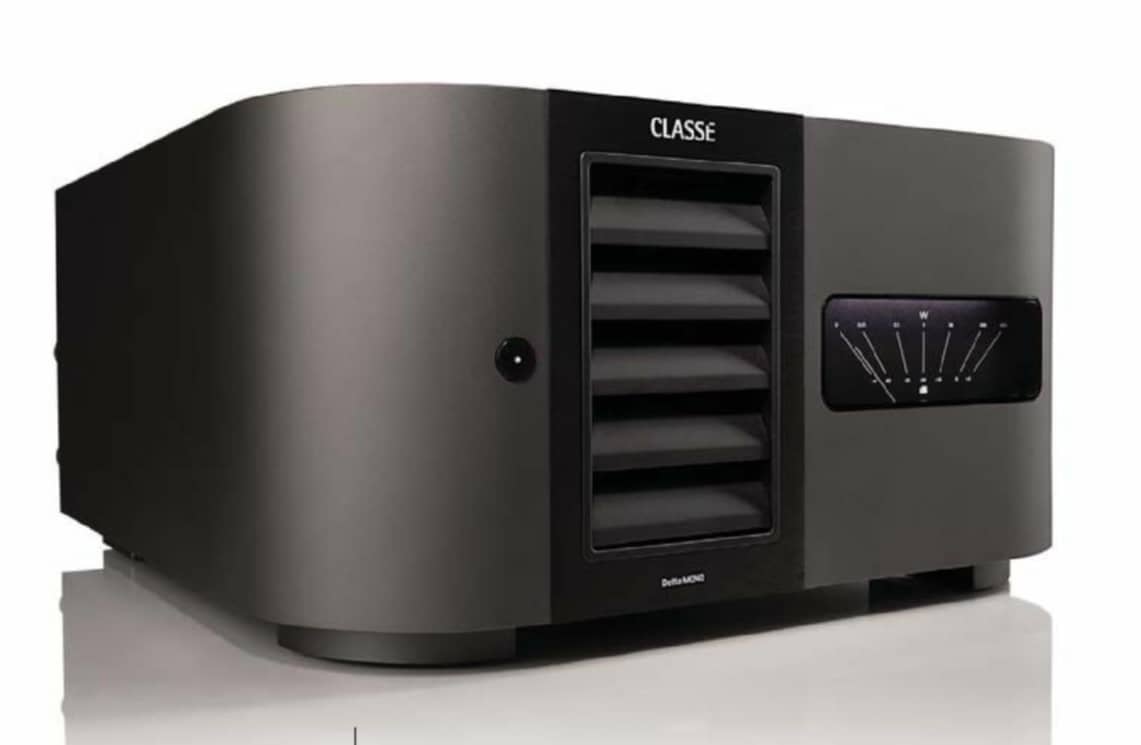 Canadian audio manufacturer Classé Audio was founded in 1980 by engineer Dave Reich and entrepreneur/audiophile Mike Viglas. The name “Classé” was a pun on the fact that Reich was a firm believer in an amplifier’s output stage operating in class-A, where the output devices never turn off (see sidebar). Though the brand was established with the 25Wpc DR-2, the first review of a Classé amplifier to appear in Stereophile, by Larry Greenhill, was of the later DR-3, in December 1985. This review had not yet been reprinted on the magazine’s website at the time of writing this report, but no fewer than 21 reviews of Classé products are available in our free online archive. These include the CAM-350 monoblock amplifier, which was reviewed by Brian Damkroger in January 2001 1 and has been used by Jon Iverson, AVTech’s self-described “web monkey,” as his long-term reference amplifier.

My own experience of a Classé amplifier dates from March 2011, when I reviewed the CT-M600 and CA-M600 monoblock amplifiers. 2 So positive was that experience that, when Editor Jim Austin asked me if I would be interested in reviewing Classé’s new third-generation Delta Mono amplifier ($21,998/pair), I didn’t hesitate to say “yes.”

First, some history Classé Audio became part of the Bowers & Wilkins Group in 2001, with Viglas staying on as chairman and the day-to-day running of the company being handled by branddevelopment VP Dave Nauber. (Reich had joined Theta Digital by that time; Viglas retired in 2010 and passed away in 2018.) In May 2016, B&W was acquired by EVA Automation; a year later, the new owner shuttered Classé’s operations in Montreal and all employees, excluding thenpresident Dave Nauber, were let go.

The third-generation Delta products—stereo and mono amplifiers and a preamplifier—are the first fruits of the new ownership. Their development had started when Classé was still owned by B&W; in a video interview, I asked Nauberhow come it had taken so long for these products to come to market.

“After Sound United purchased Classé, we continued to develop the Delta 3 designs but had to move the manufacturing from the B&W factory in China to the Shirakawa Audio Works about 130 miles north of Tokyo, where the higher-end Denon and Marantz products are made. . . . Shirakawa has the most comprehensive manufacturing and testing capability that I’ve ever seen. Everything from how a board gets made, to how a product gets assembled, to how the packaging is tested—it’s beyond anything that we’ve ever done. However, the parts procurement, all sorts of things had to be moved to Japan in order to be able to build Classé in Shirakawa. As you might imagine, most of the parts that we use are not parts that are used by Denon and Marantz, so the individual certifications were lacking, new parts had to be created in their systems, and so on. So it really took longer than any of us thought it was going to take.” 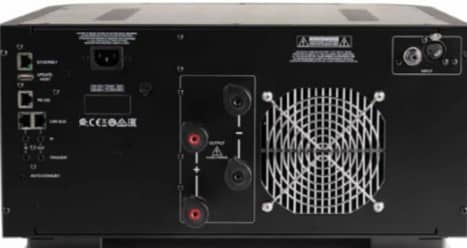 I asked Nauber what the design goals had been for the new Delta products. 4 “We wanted to shift from what had been a high-power, high-voltage amplifier to a somewhat lower-power, higher-current amplifier design [in order] to optimize it to drive lower-impedance loudspeakers effortlessly. At the same time, there were a few other things at work. We were building a less-expensive range of products, called the Sigma series, which freed us up to go with the Delta series at a higher price. When you have a discussion with the engineers, and you tell them that you want this series to be much, much better, they ask, “How are we going to do that?” Because if you don’t spend a lot more money, while you can get incremental gains, it’s hard to do something really significant. So, because we had the Sigma series, it was possible to take the shackles off a bit and spend more money, as long as we could justify the cost.”

The second surprise was how hard it was to get a handle on the Delta Monos’ sound character.

Romanian engineer Sergiu Ignat, who relocated to Montreal in 2000 and started working for Classé in 2012, joined our conversation. Ignat is the project leader for the new Delta products. I asked him what the implications of shifting to a higher-current philosophy had been.

“We maintained the same VA in the transformer—we had a 2.4kVA transformer in the CA-M600 amplifier—but we lowered the voltage rails. The rating into 8 ohms dropped from 600W to 300W, but we have a lot more current available for low impedances. . . . However, when you reduce the voltage rails, in order to maintain the same energy storage, you need to use more capacitance. We actually increased the capacitance by a factor of four to keep the same amount of energy stored in the power supply.”

Ignat confirmed that the Delta Mono uses expensive Mundorf 4-pole electrolytic capacitors in the power supply—22 of them: “Yes, as they are well-rated for voltage and ESR and other parameters.” The number pointed out that there is more than half a kilometer of copper wire in the transformer, “which is why it weighs 30lb!”

I asked Ignat about the devices used in the Delta Mono’s output stage.

“They are lateral MOSFETs. There are two MOSFETs in a single TO247 package, and we have 16 of them, which would be the equivalent of 32 classic bipolar transistors in terms of Safe Operating Area; . . . they come with a higher bias, but also when you parallel so many of them, it brings a good class-A output region. The amplifier delivers 35 watts into 8 ohms in pure class-A (though less, of course, into lower impedances)—that’s a benefit you wouldn’t have with other devices.”

I asked why he chose lateral MOSFETs rather than the bipolar devices that had been used in earlier Classé amplifiers.

“The MOSFETs that we are using are factory-matched, not only to keep a good match between same-sex devices but also for both sexes,” Ignat explained. “Lateral MOSFETs are the only devices that come with matched transconductance for P-channel and N-channel devices. With all other MOSFETs and bipolars, the N part usually has a higher gm—higher gain, if you want—while lateral MOSFETS actually match both sexes.”

Negative feedback is always a contentious issue in power amplifier design, I ventured.

“We can drastically reduce the THD in the treble towards 20kHz and even past it,” replied Ignat. “We use something called TMC (Transitional Miller Compensation). It’s not a classical single-pole compensation, it’s a bit more complex and it’s one of the ingredients of obtaining this lower distortion in the treble. . . . This type of compensation ensures that the circuit maintains the loop gain even past 20kHz. Of course, the tradeoff is that you have to be very careful about stability; . . . you can have some problems in the megahertz region, especially with MOSFETs, where they are prone sometimes to behave erratically.

“Rather than trying to get marginal gains from the prior models through additional polishing, we stepped back and made several major changes that opened the way to a significant step forward. I’d had all sorts of things running through my head. Most prominent was the reduction in stages and the shortening of the signal path compared with the prior models. There is now one common input 6-layer printed circuit board with an improved instrumentation amplifier that feeds the antiphase signals into two identical power-amp pcbs (layout-wise). Adding to this, 0.1%-tolerance gain-setting resistors were used all the way, in some cases combinations of two equal values which give effective 0.07% tolerance. The end result is very good CMRR and cancelation of asymmetries.” 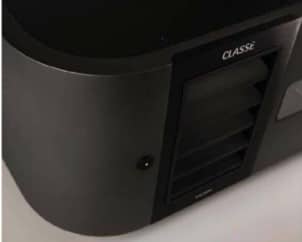 At almost 98lb, the Delta Mono is a heavy piece of kit. It continues its predecessor’s styling feature of having a front panel that curves around to form the side panels. The front panel also hosts a large air intake used by the amplifier’s ICTunnel active cooling system (see sidebar). The intake’s louvers have an airfoil profile for low-noise airflow and are magnetically attached to allow removal for the internal filter to be cleaned. Next to the air intake is a first for a Classé product: a VU meter. Rather than connect the meter circuit to the output stage, it is first galvanically isolated with an optical coupler, then the signal is passed to a 10-bit A/D converter. After the digital data are converted to a logarithmic scale and processed for the appropriate ballistics, they are converted back to analog to drive the meter mechanism.