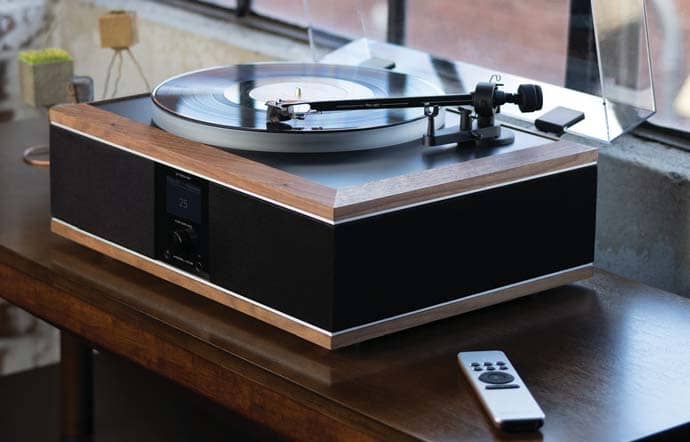 Apart from the Beatles and Hendrix I heard in my audiophile father’s basement, one of my earliest rock’n’roll memories involved a multipurpose record player at school. In third grade, six of us were moved as a separate group to a round table to watch a filmstrip in a darker part of a large, open-plan classroom. A clunky old record player in a self-contained carrying case with a half-dozen headphone jacks sat on the table. We each plugged in a pair of headphones to hear the soundtrack for the filmstrip we were instructed to watch— unsupervised. Ben discreetly pulled out his older brother’s LP of Queen’s The Game and played it instead. I don’t remember the filmstrip, but “Another One Bites the Dust” is etched in my memory. In spite of that rock anthem’s insistent heavy bass riff, we 8-year-olds somehow managed to sit still enough to get away with it.

Fast-forward to the present, when integrated vinyl playback systems have come a long way with technology, materials, and design. Still, an “all-in-one” system can raise an audiophile’s hackles, and for, um, sound reasons (pun in-tended): The more you pack into a single chassis (or speaker enclosure or whatever), the more can go wrong. There are noise considerations and spatial limitations, vibrations and feedback. Some audiophile readers might be reminded of furniture-like stereo consoles from their youth that, while some of them sounded pretty good, were not the pinnacle of hi-fi.

Now Andover Audio has created the Model-One, an integrated turntable system that’s intended to have broad crossover appeal, or anyway, to appeal to music lovers who aren’t members of the audiophile set. I noticed that the Model-One intrigued some guests of audiophile attendees when I first encountered it at the 2019 New York Audio Show.

The Model-One packs a lot into a single enclosure: a record player with speeds of 33.3, 45, and 78rpm; an internal phono preamp and amplifier; an ADC and a DAC; a headphone amp; and built-in speakers. It comes with a matching, full-function remote control. All this can be yours for just $1999.

A moment’s thought leads one to the conclusion that a turntable sitting on top of a loudspeaker is problematic. Loudspeakers vibrate. Turntables—rather, phono cartridges are designed to respond to vibrations.

To address that challenge, and other sonic challenges inherent in an integrated turntable all-in-one unit, the Model-One leverages sophisticated audio technologies, including specialized DSP, that were originally developed for other product categories and applications.

I spoke with Bob Hazelwood, Andover’s director of product development/ head engineer, via Skype. Andover Audio, he told me, is a new brand, but the company is not new; it has been designing and supplying OEM components for a range of well-known brands, going back to Cambridge SoundWorks, which was co-founded in 1988 by Henry Kloss (with Tom DeVesto) as a pioneer at selling consumer electronics direct, first via magazine ads, then retail stores, then online, via CompuServe, before the Internet was even a thing.1 In 1997, Singapore-based Creative Technology, manufacturer of Sound Blaster sound cards, purchased Cambridge SoundWorks along with other pro-audio companies, including E-mu Systems and Ensoniq, to combine and further develop DSP software and other technologies. Years later, in 2012, a deal was struck to separate the OEM business, which launched as Andover Audio. Eventually, the company started to sell products with the Andover brand.

Ironically (given the original company’s early history as online sales pioneers), Hazelwood says that the Model-One is best sold in person, through dealers, although it’s available online direct.

“We designed it for the average person but in a way that an audiophile wouldn’t find lacking,” Hazelwood says. “We shot for what we thought was the point of diminishing returns while not cutting too many corners.” Accordingly, Andover specified certain parts from known audio manufacturers.

Obviously, the Model-One system was made to appeal to vinyl fans: It has a Pro-Ject turntable portion—specifically a Debut Carbon Esprit SB, a belt-driven design made in the Czech Republic that costs $599 at retail equipped with either the same or a very similar 8.6 carbon-fiber tonearm and an Ortofon 2M Red moving-magnet cartridge. The stock cartridge on the Andover is an Ortofon 2M Silver, which Ortofon says is a step up from the Red; it has silver-plated copper coils as found in the 2M Bronze and Black but with fewer windings.

The Model-One uses a hybrid phono preamp with a mixed topology of active low-frequency and passive high-frequency EQ stages prior to conversion. Hazelwood explained in an email: “The reasoning behind this is that the passive high-frequency pole more accurately follows the RIAA curve at the top end, and the active low-frequency poles avoid the dynamic range limitations that the RIAA curve would create with a totally passive EQ design.”

The tonearm and cartridge ship attached, so only basic user assembly is required: placing the platter, belt, and counterweight; balancing the tonearm; and adjusting the tracking and anti-skate force. All the necessary parts are included.

The cartridge is of course replaceable, and the 2M series allows you to upgrade by changing out the stylus; a 2M Blue stylus would be an upgrade. I considered swapping in another cartridge but figured most Model-One buyers will stick with the stock Ortofon at least for a while; it’s a good entry point. The manual guides the user through the handful of setup steps—and covers the system’s other functions and features—but I’d suggest watching the video illustrating the Model-One’s setup.2