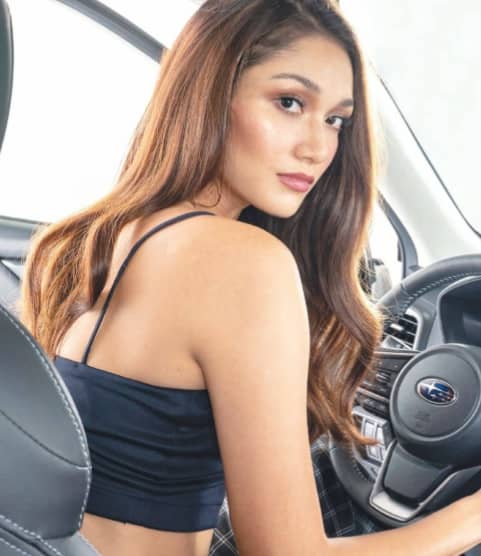 If you knew or saw Monika Sta. Maria during her teenage years, you wouldn’t think she’d be one of the most sought after models in the country—and in Asia—today. “I was so awkward,” Monika exclaims during our interview with herafter our cover shoot. The Asia’s Next Top Model (ASNTM)Season 3 runner-up attributes this lack of self-confidence during her high school and college days to her “gangly”appearance—curly hair, braces, and hunched posture—the latter she did to avoid standing out because of her stature.

In college, she played for De La Salle University’s women’s volleyball team, the Lady Spikers. Even then, Monika admits to being insecure. “I was so shy, painfully shy,” the 27-year-old tells us. But it was when she was playing for the team that she had her first runway stint—as an athlete—and got the confidence boost she would soon use to conquer many more catwalks, stages, and modeling spaces. “When they made me walk the runway, that was the first time I was so confident and was not shy at all,” she says.

From then on Monika set out to pursue what she loves doing the most: modeling. You can see it in every pose, every smile, and every movement in front of the camera.

While her short modeling stint in college was what introduced Monika to her passion, her first series of professional gigs was in the show called Fashion Watch, created by fashion designer Inno Sotto. This monthly showcase promoted Filipino designers and their work and vision. The event also featured local models, which allowed Monika to kick-start her professional modeling career.

Perhaps her biggest project to date is joining Asia’s Next Top Model, where she bagged the runner-up position during the show’s third season. While it was her dream to become part of the show, Monika said it was also stressful at times because of the tough competition.