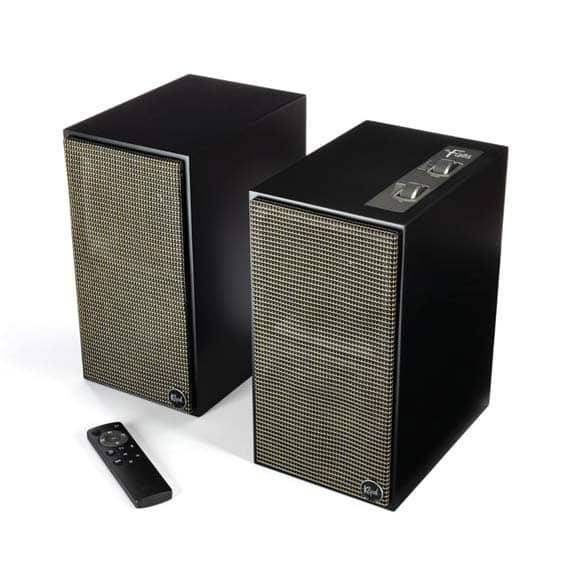 I’m all about simplicity so I welcomed The Fives with open arms.

I’m all about simplicity so I welcomed The Fives with open arms. A follow-up to The Sixes Klipsch introduced a couple years ago, the new speakers are smaller and take connectivity to the next level with the addition of an ARC (audio return channel)- enabled HDMI port. If I had to pick one word to describe this system, it would be versatile.

The Fives can accommodate just about any audio setup. Jack in your source — or grab your phone and open your favorite music app — hit play, and you’re off. No need to deal with an outboard power amp or receiver and the system is equipped with an arsenal of connections that go well beyond that handy that HDMI input, which makes supercharging TV sound a one-cable affair. Prefer (or need) an optical hookup? No problem, it’s there along with support for Bluetooth streaming, a USB port for computer hookups, an analog minijack input, and a set of analog RCA inputs with a twist: They can be switched between line-level and phono, which taps into a built-in preamp for turntable hookups. Klipsch also includes a line-level subwoofer output, which I suspect most people will ignore because the Fives are quite capable in the bass department out of the box. You can operate the speakers using a supplied remote control or two rotary dials — one for volume, the other for source selection — on top of the right speaker, which houses power amplifiers that deliver 2 x 60 watts to a pair of 4.5-inch woofers (one per enclosure) and 2 x 20 watts to a pair of 1-inch titanium tweeters, each loaded in Klipsch’s signature Tractrix horn.

Build quality is beyond reproach with a nice walnut veneer finish and woven cloth grilles that attach magnetically, which makes them a cinch to remove. The Fives are also offered in an attractive matte-black finish with matching tweed grilles.