I’VE REVIEWED many Revel surround speaker packages over time, but it’s been six years since my last Revel review, a system centered on the Performa F208 tower speaker. At around 13 grand, that system could still be considered an affordable option compared with a full surround package built around the company’s flagship Ultima range. Now, with its PerformaBe line, Revel has a mid-price speaker offering to help bridge the gap.

The “Be” in PerformaBe indicates the Berylliumdome tweeters used across the range. Until recently, the only PerformaBe models were the F228Be tower and M126Be bookshelf. But three additional models were introduced in late 2019, all using the same 5.25-inch midrange and beryllium tweeter: the F328Be tower with three 8-inch woofers; the smaller F226Be tower with two 6.5-inch woofers; and the C426Be three-way center with four horizontally arrayed 6.5-inch woofers. While such an arrangement in a center-channel speaker can cause erratic response due to comb filtering, the C426Be’s design eliminates this concern by handing bass over to the midrange at a relatively low 210-Hz crossover point.

All of the woofer and midrange drivers in PerformaBe models (apart from the coated, pulp-coned subwoofers) employ DCC (Deep Ceramic Composite) cones consisting of an aluminum base coated with a ceramic oxide that forms when aluminum is heated. This oxide is said to help damp the resonances common to metal cone drivers. All of the speakers come with removable, magnetically secured, black grilles. Without them you might find the 14 light-tone drivers staring at you from the front of the room just a little intimidating! Nevertheless, I went completely grille-less since no speaker grille can be totally transparent.

Due to its combination of low mass and rigidity, Beryllium is increasingly used for tweeters in high-end speakers despite its high cost, fragility, and toxic qualities. The fragility is typically handled, as here, by some form of protective screen or shield. And the toxicity is only an issue if it shatters and scatters Beryllium dust (more of a potential problem during manufacturing). The Be tweeters here are also fitted with the latest iteration of Revel’s long-standing acoustic waveguide that's said to control high-frequency dispersion while better matching the tweeter’s dispersion to that of the midrange driver at the crossover point. (All crossovers in the PerformaBe speakers are fourth-order acoustical.)

There are two subwoofers in the Performa line offering either a 10-inch or a 12-inch driver. Revel sent us a pair of the smaller, 10-inch B110V2s. Both models are compact and provide 1,000W (RMS) amplification, rugged drivers said to have 82 percent more linear excursion than their V1 predecessors, and massive (19.2 lb.) magnet structures. There’s a single parametric equalizer onboard, and also an Extended mode offering a slightly greater extension in the deepest bass. (In my room I found the bass to be not quite as clean under stress in Extended mode, so I left it off.) All rear-panel controls are manual only— there is no wireless setup accessible via an app. Revel’s Low-Frequency Optimization, a feature in the V1 versions that required a computer for set-up, is not included in the V2 subs.

The angled sides and rounded backs of the PerformaBe speakers, together with their internal bracing, are said to significantly increase cabinet rigidity, something to which I could vouch for via the highly technical knuckle-rap test. All models offer pairs of input terminals for either bi-wire or bi-amp use. The subwoofers are available in piano black, gloss white, or gloss walnut finishes, while the tower, bookshelf, and center channel speakers add a metallic silver option.

I positioned the F226Be towers 9 feet apart, with the C426Be center between them on a low stand beneath my projection screen. The front speakers sat roughly 4 feet out from the wall behind them and were angled toward the center listening seat. One of the B110V2 subwoofers was located in the front of the room, the other in the back as described in Subwoofer Setup Steps from the April/May 2020 Sound & Vision (also available at soundandvision.com), a how-to feature that details the layout of my 10,000 cubic feet-plus open-concept room. Revel also sent a pair of M126Be bookshelf speakers to use as surrounds and these were positioned at the sides of the room just behind and slightly above the listening position. 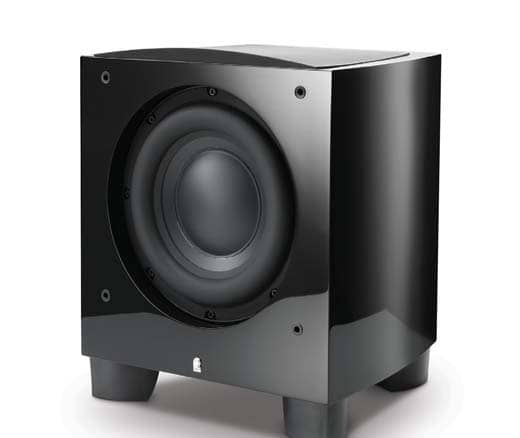 All music listening was done in stereo, starting with the F226Be towers alone without subwoofers. Most speakers I’ve used in my very large room without subwoofer support have sounded bass-light. But with these Revels sans subs, large Kodo drums sounded tight and hard-hitting, with no bloat or boom. While this was impressive at first, it soon became obvious that the bottom two octaves or so were largely missing. The bass on Bela Fleck’s Flight of the Cosmic Hippo was clean, but it lacked the growl that makes the track effective. And while there was enough going on in a good organ recording to be relatively satisfying, the weight in the low octaves that makes the organ unique among instruments just wasn’t there.