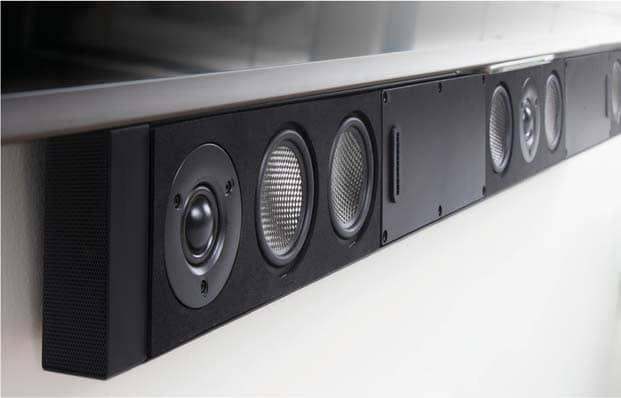 Today, some 15 years after its founding by tech entrepreneur/billionaire Bob Madonna, Savant continues to expand its Mac-based smart home solution, and with some recent acquisitions, to broaden its market reach.

SOUND & VISION readers will know Savant as one of two upstarts that, along with Control4, arrived in the early 2000s to challenge Crestron and AMX in the emerging home automation market. Today, some 15 years after its founding by tech entrepreneur/billionaire Bob Madonna, Savant continues to expand its Mac-based smart home solution, and with some recent acquisitions, to broaden its market reach. Most notable is the high-profile purchase this year of GE Lighting. Lighting is an obvious element of home automation, but there are less visible benefits for Savant, starting with the strengthening of its position in lighting control. More critically, GE is a respected consumer brand with strong retail distribution (including for its own “C by GE” connected home products), and its technical expertise runs deep. Craig Spinner, Savant’s senior VP, explained that “the Savant brand will remain steadfastly committed to the professional installation channel,” but he added that the acquisition “creates an opportunity to reach millions of homes and drive the mass adoption of smart home technologies via the do-it-yourself, do-it-for-me/electrical contractor, and dealer/professional installation channels.”

The acquisition in 2017 of premium loudspeaker manufacturer Artison is more directly relevant to this soundbar review. Savant has long been a proponent of audio over-IP solutions for distributing whole-house audio. Absorbing Artison, and giving the company access to the expertise of speaker industry legend Cary Christie (a co-founder of Infinity) plus the product family he developed, allows for an obvious expansion of Savant’s network-controlled audio lineup while delivering true audiophile sound quality.

The three products reviewed here are an outgrowth of that effort. The Savant Smart Audio WiSA Soundbar 55 ($1,500) is based on Artison’s earlier passive soundbar designs, with modifications that add amplification, WiSA wireless capabilities, and smart home technology that I’ll describe in more detail below. Savant’s Smart Series WiSA Nano Subwoofer ($1,000) is similarly based on Artison’s late-generation micro-subwoofer design but is outfitted with WiSA wireless, while the Smart Series WiSA Surround Speaker ($1000/ pair) is a powered bookshelf with WiSA built-in. Savant’s bundled price for the system is $3,000, and it comes with the company’s Pro Remote X2 ($800 MSRP in standard finish). I should mention early here that this audio system, as with all Savant systems and components, is strictly sold and installed for you by Savant’s trained custom integrators and Best Buy’s Magnolia outlets.

We’ll start with the bar, which is a 54-inch wide, 5.5-inch tall, and 2.5-inch deep rectangular black box. It is intentionally devoid of any attention-grabbing styling and is made to either disappear on its own or be hidden behind a custom grille of any width and color that allows it to mate seamlessly with its parent television. The cabinet, which comes with a set of wall-mount brackets as well as rubber feet, is made entirely of extruded aluminum with a black anodized finish, giving it immense rigidity not to mention heft (it weighs 21.7 pounds).

Savant’s soundbar is a classic three-channel LCR model, with individual sealed chambers for each channel’s driver array. Each chamber contains a pair of 3.5-inch woven carbon fiber midrange drivers designed in-house by Artison and mated with a high-end, 1-inch Vifa DX25 audiophile cloth dome tweeter. The left and right tweeters are each pushed to the respective far edges of the baffle, while the center channel tweeter sits dead center between its twin midrange drivers. Die-cut EVA foam covers the soundbar’s baffle and serves to absorb any stray driver reflections. 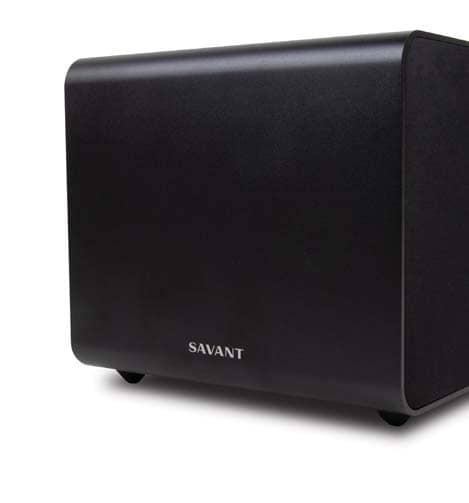 The bar has Dolby Digital and DTS stereo/multichannel processors onboard. When it receives a 5.1-channel multichannel input, each channel array gets the straight audio signal as it would from an AVR, with no spatial processing to enhance imaging or otherwise mess with the sound. The only accommodation in that regard is the addition of a side-firing, 0.75-inch cloth dome tweeter on each endcap that’s intended to subtly widen the soundstage. The signal for those is derived by high-pass filtering the left or right signal (depending on the side) at 6 kHz and phase inverting the information. When the bar is fed straight stereo, the center-channel array receives a mixed L+R signal. Each channel array is driven by a robust 125 watts of class-D amplifier power, for a total of 375 watts.

Around back is a socket to plug in the power cord and a small connection panel that looks nothing like the jackpack on any other soundbar. There’s an RJ-45 Ethernet port to connect directly to your home network, which is encouraged to ensure a robust signal. As you’ll read, the bar functions as the centerpiece for a full-fledged home automation system and works best with a reliable wired connection. Also, when hard-wired to your network via Ethernet, the soundbar can function as a wireless access point.

There is a single optical digital input to accept an audio signal from the mated TV, which will typically handle all your source switching. No HDMI ARC or other HDMI connection is provided, which is not an issue for device control in this case but does limit audio quality to whatever Dolby and DTS signals can pass via optical— basically the lossy Dolby Digital and DTS core.

A 6-pin Phoenix block connector fires IR-blasters that let the smart technology control up to three components, most likely your TV and a couple of nearby sources such as a cable box and game console, disc player, or streaming box. But Savant’s system can also command some devices via the network (Roku streamers, for example), and others by an RS-232C serial bus connection available through a second 6-pin Phoenix. Lastly, a pair of 3.5mm jacks are for IR learning (if it’s needed for a device or command that’s not in Savant’s database), and there’s a subwoofer output.