A system failure at home can ruin your day; Darien Graham-Smith gets ready for the worst to happen, and explores what you can do when it does

An unexpected outage or data loss can be hugely costly to a business – but when disaster strikes at home the stakes are arguably even higher. Over time, a healthy company will (hopefully) recover from a one-off incident, whereas if your half-finished novel and that folder full of videos from your last family holiday are lost then you may never get them back.

It might be overkill to draw up a formal set of recovery procedures for your personal devices, but it’s important to have some idea of your exposure, and your remediation options if the worst comes to pass. Here’s our guide to recovering from the most common disaster scenarios, and how to protect yourself before they happen.

There are lost files, and then there are lost files. Sometimes, when I can’t find a document that I swear I’ve saved in such and such a folder, it turns out that I’ve been tripped up by a Save requester opening at an unexpected location. A quick file search reveals that the file I thought I’d saved to Documents is actually sitting pretty in Downloads.

But what if you’re certain that a file has vanished? If, for example, it appears in a Recent files list but now comes back with a “not found” error, then a little more sleuthing is required. If the folder is linked to a cloud service such as Dropbox or Google Drive, the cause could be a synchronization error with one of your other devices or a well-meaning bit of housekeeping by someone else with access. This is easy to check and resolve: log into the Dropbox or Google Drive website and you can audit all file activity, and restore any files that have been changed or deleted in the past 30 days.

If the file has vanished from a local drive then one possible culprit is Windows Defender, which has an infuriating habit of silently removing files it doesn’t like. In the latest version of windows 10 you can check its log by opening the Settings app, navigating to Virus & threat protection and clicking the Protection history link. It’s possible that your file has been quarantined, and can be restored with a few clicks. (If you don’t find this helpful, see “Defend your files from Windows Defender” on p47.)

If you still haven’t recovered your file, it may simply have been accidentally deleted. Check the Recycle Bin, and then your backup archive – because I’m assuming, of course, that you’re regularly backing up your files. If you’re not, then that’s not great – but before you despair, double-check. It may sound silly, but some modern backup systems (including windows’ File History feature) are designed to work entirely in the background, which means you could conceivably be running one right now that you had forgotten about.

Failing that, it’s time for an undelete tool such as Recuva. If you don’t already have this installed, the portable version can be downloaded from ccleaner.com/recuva/ download/portable. You can save this to a different disk, or to a USB flash drive, and run it directly from there, ensuring that the program files won’t overwrite the data you’re hoping to recover. If Recuva can’t find your file, I’m afraid it might be properly lost. I think you know the moral of the story. 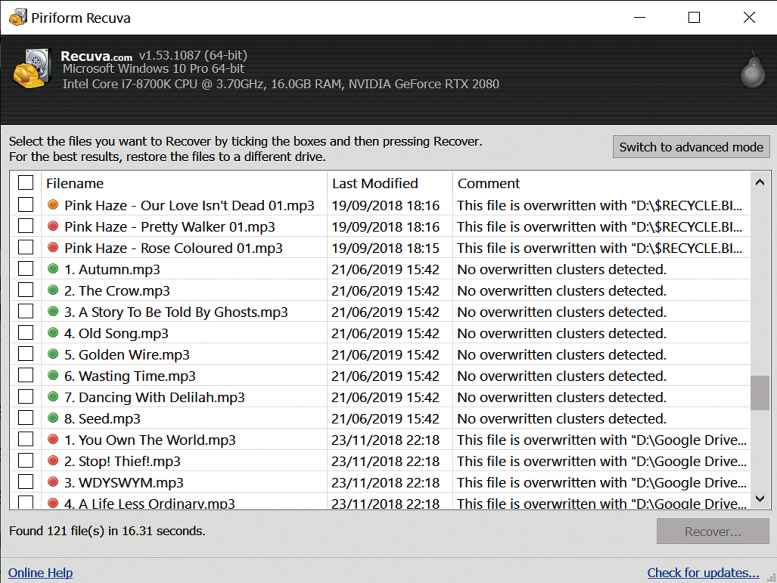 Resuming work after a reboot

In theory, the latest version of windows 10 puts you largely in control of when your computer restarts. In practice, sooner or later you’re going to get called away from your computer while you’re halfway through a piece of work, and the inevitable is going to happen.

It’s not officially possible to prevent windows from automatically rebooting, although there are tricks you can use. Mine is to set the Task Scheduler to run an elevated PowerShell script containing the following lines every hour: