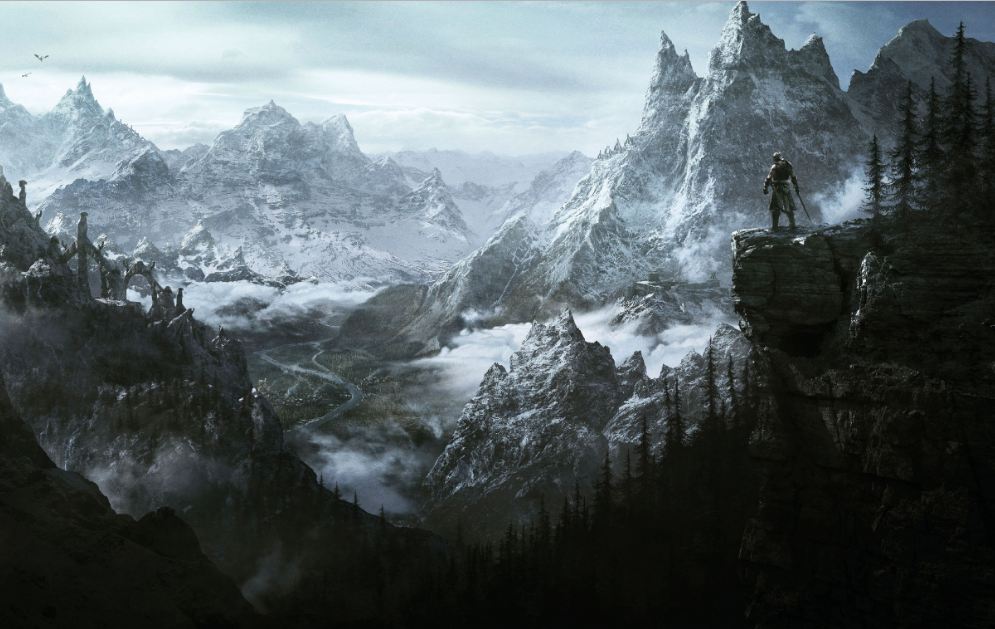 JOURNEY WITH US THROUGH GAMING'S GREATEST PLACES

Sometimes the real world weighs heavy on us all. This year, it’s felt like about 2,020 kilos’ worth. It can make luxuries like videogames feel pretty frivolous. But, at the same time, your PC can provide the perfect escape.

Virtual worlds, despite more often than not being embroiled in their own wars and conflicts, are happier, simpler places, where everything makes sense and, as long as you keep plugging away, you’re always making progress towards resolution and success. They can show you beautiful, impossible things; provide a sandbox for your creativity and imagination; or just be a warm and pleasant space to exist in for an hour or two.

When times are dark, that’s a magic worth celebrating more than ever, not dismissing. Over the following pages, that’s exactly what we’re going to do. Read on to discover some of our very favorite videogame worlds, and the thoughts, opinions, and experiences borne from them. Perhaps after, you might take a little time to delve back into one of yours. 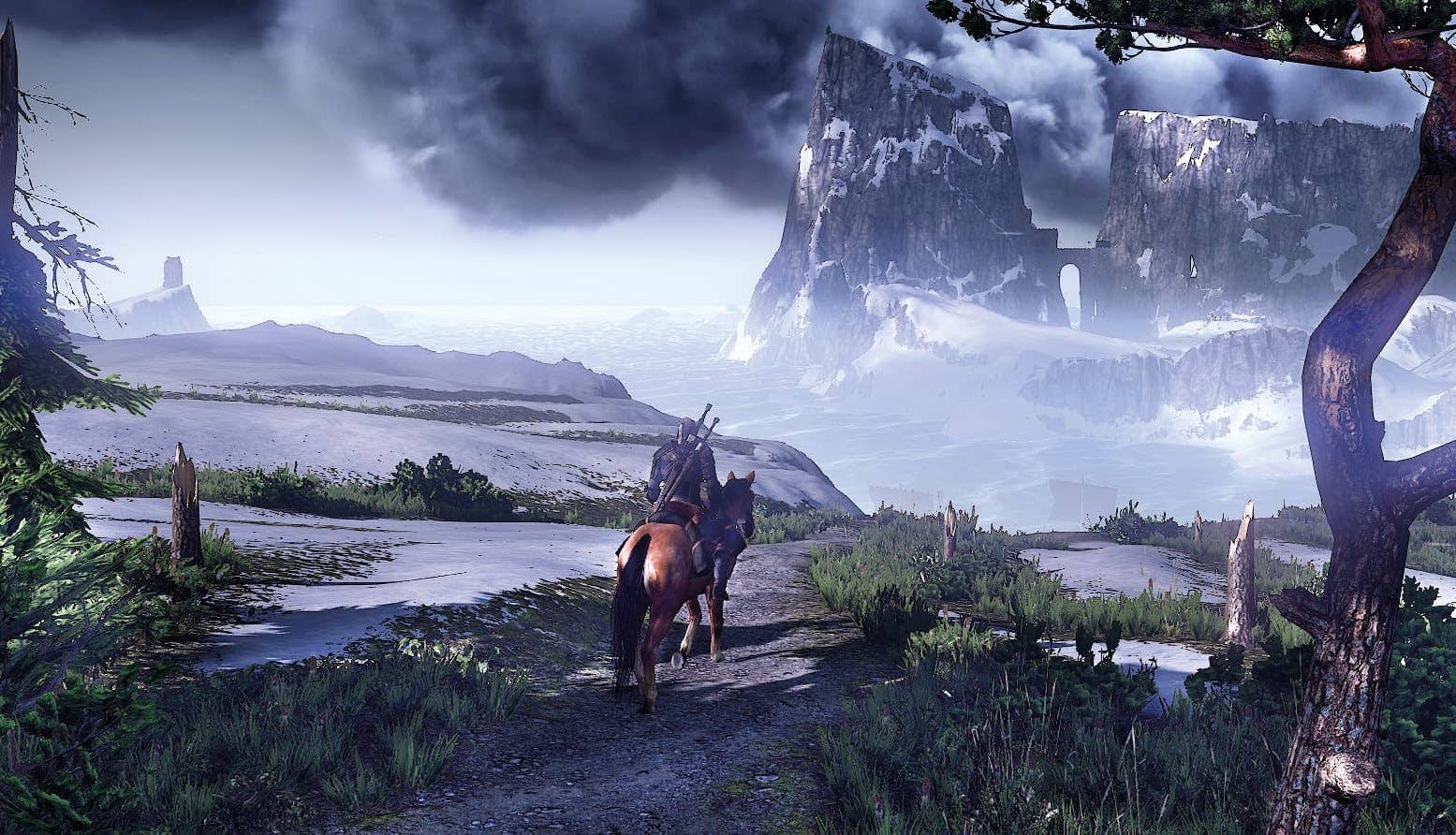 How the gritty reality of THE WITCHER 3’s sorcery makes The Continent feel like home. By Harry Shepherd

The scene before me is unfathomably ghastly. Charred limbs and torsos the color of charcoal are only things that suggest that these are humans littering the ground as I pick through the gore to find a man’s lost brother. I’ve witnessed the carnage that remains of this battle between the forces of Nilfgaard and Temeria before in the deceptively-quaint region of White Orchard before, some years ago—so what possessed me to return to this nightmarish world?

Well, for a start, The Witcher 3 isn’t all battlefields and rotting flesh. In fact, it’s frequently staggering in its beauty, from the rugged pastoral scenes of Skellige to the bustling metropolis of Novigrad. Nevertheless, amid the bucolic rolling hills and the sparkling rivers running between them, tragedy lies. Civilians are murdered by soldiers, husbands abuse their wives, and serial killers play twisted, deadly games. Even in Toussaint, a fairytale space of impossible allure, the monstrous and cruel can be found beneath its shimmering surface.

While The Continent isn’t exactly a holiday destination, few videogame worlds have had me so enchanted. It’s an environment that feels real and, most importantly, human, warts and all. And, in many ways, that’s not in spite of the fantastical magic and supernatural monsters inked into the world’s rich canvas, but because of it.

Yes, some supernatural stuff comes from the Conjunction of the Spheres, where a collision of realms allowed magic to appear, but magic in The Witcher 3 otherwise tends to be rooted in something real. It doesn’t just exist, it comes from somewhere. Manifestations of magic emerge from actions and foibles that are resolutely human. Take the Velen contract, Jenny O’ The Woods, that has Geralt hunting a night wraith. On further investigation, you discover that the demon was once a Temerian woman called Zula, violently murdered by a man whose romantic advances she’d once spurned. 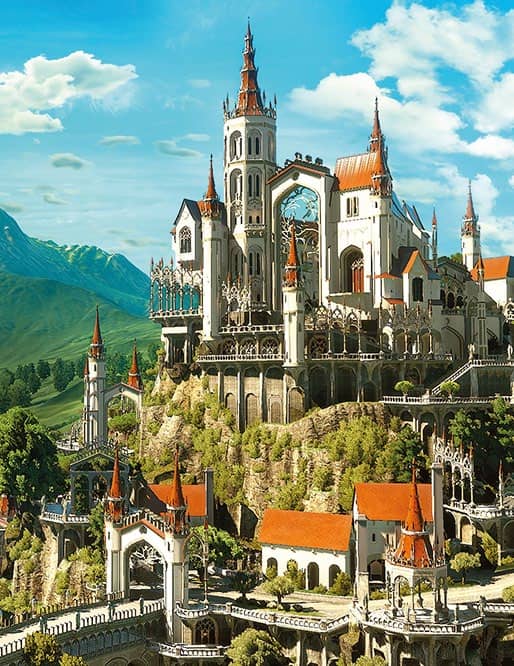 You encounter countless examples like this throughout your journey in The Witcher 3. Family Matters sees you meeting the Bloody Baron, a man who’s drunkenness and violence led to his wife’s miscarriage. Then there’s The White Lady, originally a woman who on her wedding day chose suicide over an arranged marriage to a much older man. Often monsters you’re paid to exterminate are far from monstrous at all. Just like the singed husks decaying on the ground of White Orchard, these are just unfortunate souls made victims by tragic circumstances that are inescapably human.

It’s this that distinguishes The Witcher’s world from the high fantasy of The Lord of the Rings. Magic and the supernatural is subtle, not abundant. It makes The Continent a world we can all recognize: It’s textured with sorcery, rather than defined by it.

So I keep coming back to Geralt’s world, for all its grotesque battlefields and human defects, because it feels reassuringly like home. The Witcher 3’s world isn’t perfect, and nor do I want it to be. The magic that ebbs and flows within it is a neutral force bound up with very real human impulses.

The problems that plague the world aren’t my own, but, also, they are. The difference is that, by contrast to the intractable issues that beset the real world, which can make us feel helpless, these Geralt has the means to do something about. Hopefully, after hours faced with just about everything humans can do to one another, we learned something about the real world, and ourselves.

Three of The Witcher’s most tragic beings 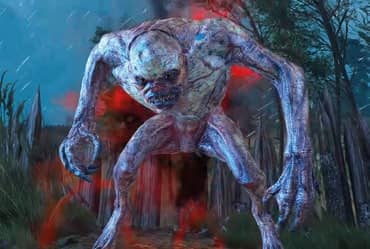 Botchlings are deformed fetuses born from miscarried babies not given a proper burial. In Family Matters, you have the choice to either kill the being, or try to turn it into a kindly guardian spirit called a Lubberkin. 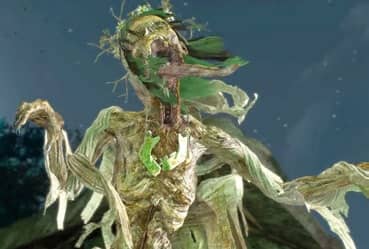 It’s likely you’ll hear one of these before you see them: They’re known to scream in pain and linger in places special to them in life. These spirits remain due to a sense of being wronged, driven by an eternal anger. 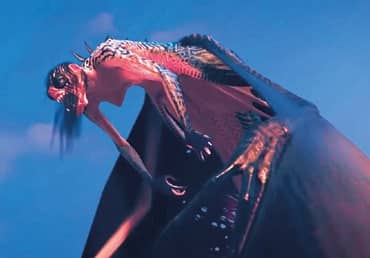 These adept hunters are known to use their bodies to seduce sailors before killing them with razor-sharp talons. Legend has it they weren’t always hostile: It’s said that Sirens once accepted the courtship of men. 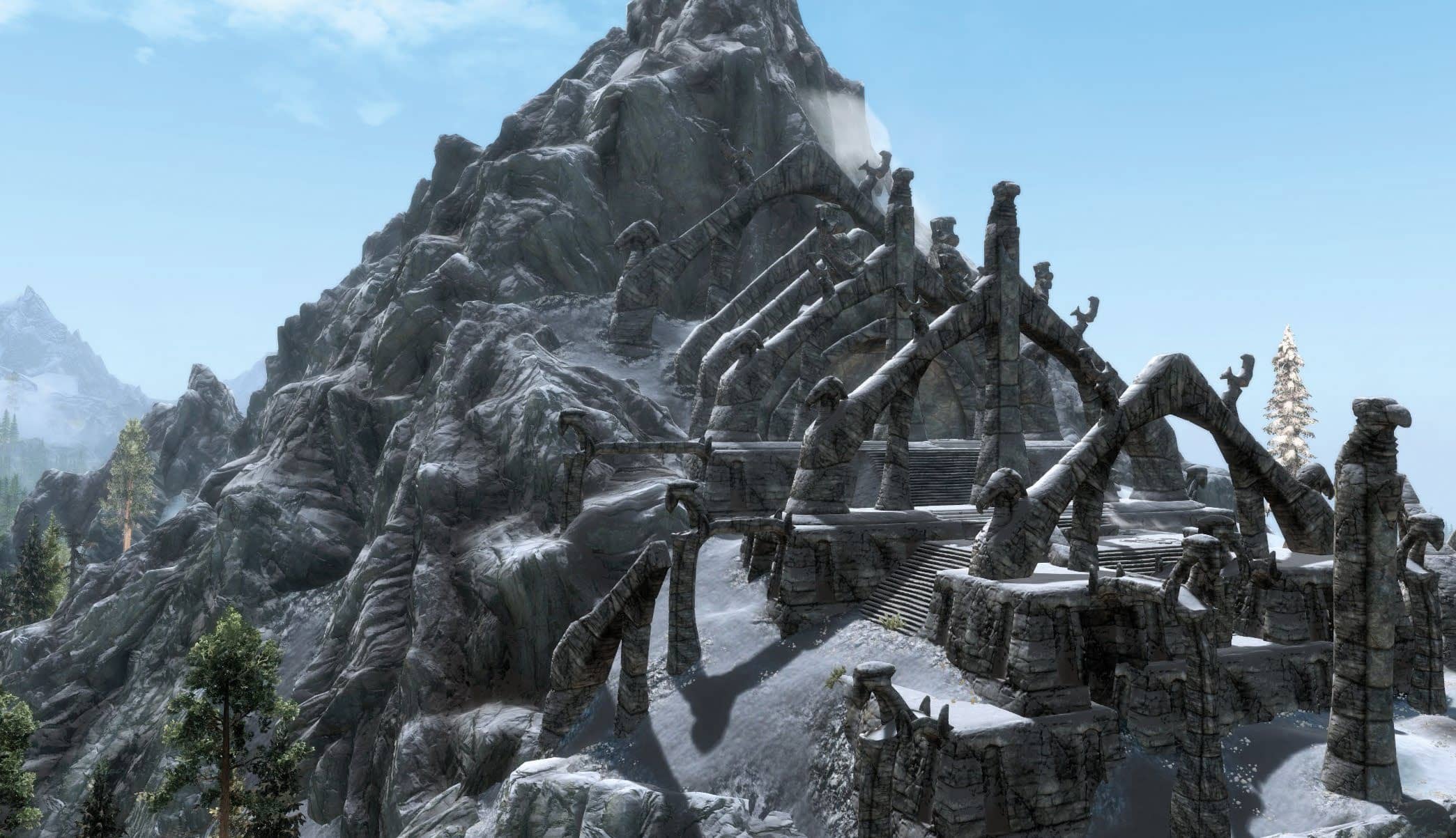 Mountain climbing in SKYRIM is bizarre, but maybe that’s a beautiful thing. By Phil Savage

Hereby, I offer my apology to every environment artist working in games, past, present, and future. How many hours do they spend creating lavish, gorgeous, massive open worlds? Hundreds? Thousands? Huge teams spend years bringing to life spaces we could only dream of exploring— resplendent fantasy vistas and detailed historical reimaginings both. And how do I respond to this work? By running face first into a mountain. My strongest memories of Skyrim are of being pressed against a cliff texture. Yes, it’s a game filled with big moments— the dragon attacks, the dramatic battles, the fun sidequests discovered in unlikely locations—but those are punctuations on a game that’s often about simply travelling through an enormous world.

Less than an hour into a fresh playthrough, I’m rubbing up against the mountain west of Riverwood, trying to carve my own path to Bleak Falls Barrow in an effort to retrieve a golden claw stolen from a shop. There’s probably a path that leads here—a painstakingly crafted and playtested route that will contain just enough adventure to make for a satisfying journey. And yet I’ve never found it.

Skyrim, like most RPGs, has a compass that points to your next destination. And me, like most idiots, treats that not as a helpful guide, but an absolute beacon of truth. The shortest distance between two points is a straight line. Or, more often, a straight line that leads through a mountain that eventually becomes too steep to climb.

The trick to climbing in Skyrim is persistence. If a mountain cliff becomes impassable, keep going anyway. Keep moving forward, but tilt your mouse to the left or right to start sliding along the horizontal axis. As long as you keep holding the W key, you’ll almost never lose vertical position. Eventually you’ll start to see opportunities for gaining height—gentler slopes that yield greater elevation.

Am I ruining my own sense of immersion? Yes, but I’d argue that I’m doing so in a way that makes me appreciate the game even more.

It’s tempting to think about escapism purely in terms of the fantasy a game is trying to depict. You’re the chosen one, fighting back alone against the forces of darkness. You’re the cowboy, railing against the greed and corruption of the civilized world. You’re the truck driver, shipping essentials across the highways of Europe. But your lasting impression of a game is more than just the fantasy it’s trying to sell. It’s about the way you chose to play. 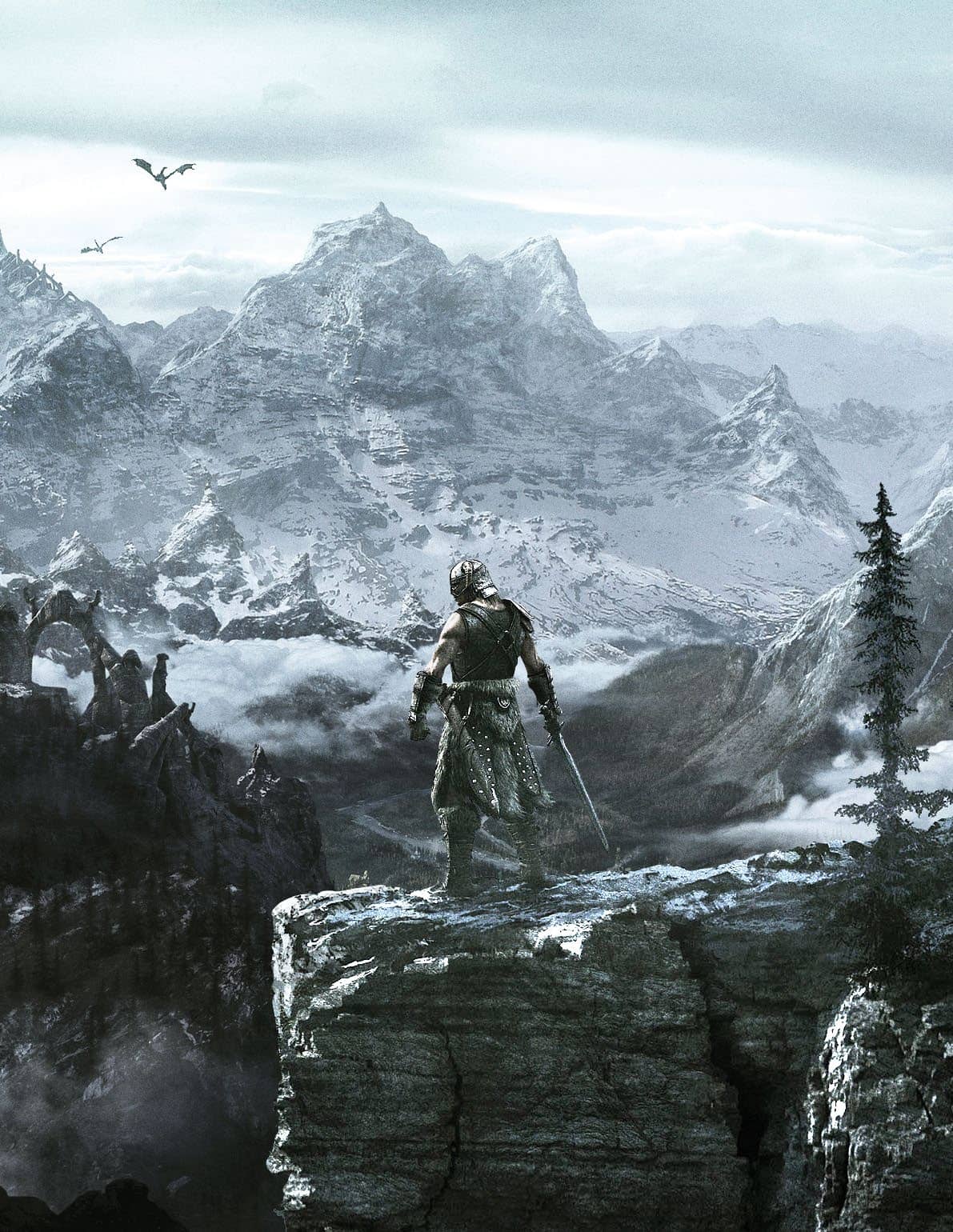 Games once held a sense of mystery and wonder. As a child, it felt like anything was possible in these rudimentary worlds. Eventually my knowledge of what games could do—what they could be—started to grow. Even as the worlds became bigger and more complex, the infinite possibility space closed in. While plenty of games surprise with their ideas and execution, I found that the sense of magic was lost. I used to think that was quite a sad thing, but I’ve grown to appreciate the relationship that forms in a work that’s familiar and known.

There is no mystery left in Skyrim for me. I’ve played it for hundreds of hours. I’ve modded it. I’ve looked inside its editor to find out what makes it tick. And it turns out there’s escapism in predictability and order. Our world is chaotic to the point of feeling random. The relationship between cause and effect is so cosmically vast as to be beyond human understanding. In games, though, it can be reassuring to see the edges of a world; to find the limitations of the simulation. If you know what a game can be—if you understand its rules and design—you can also create tricks to turn it to your advantage.

In games, you can run at a cliff until you reach the top. What could be more empowering than that?

SKYRIM 2020 Part of a series of hi-res texture packs by Pfuscher. Install them all, if your PC can handle it.

Improves the static meshes of many in-game items, improving the appearance of everything.

There’s a lot of trees in Skyrim, so it makes sense to have them looking their very best.