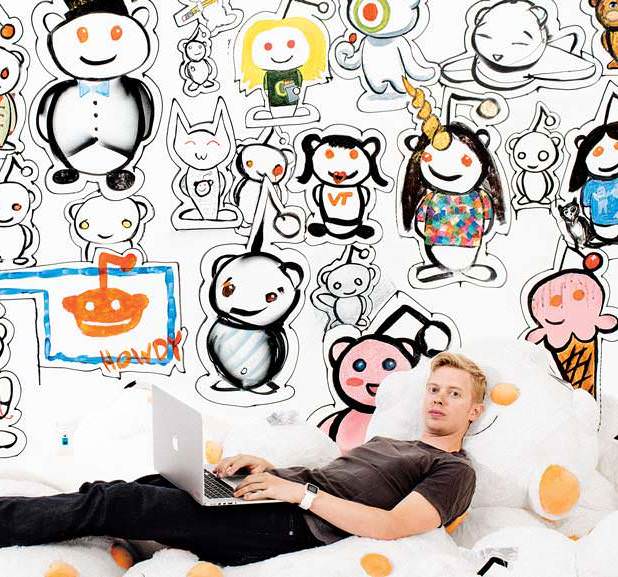 Steve Huffman was on his couch when Reddit mutinied. Huffman had co-founded the popular news-ranking site with Alexis Ohanian in 2005  and left in 2009 after selling it to Condé Nast. In the years since, he had watched from afar with a mix of pride, as the site grew into the 11th largest in the U.S.; remorse, for selling too early; and frustration, as Reddit failed to mature and was repeatedly wracked by disruptive forces. Reddit is, above all, a collection of nearly 10,000 bulletin boards called sub-Reddits, which range from the general, like Politics and Technology and Food, to the more particular, like one called Whalebait, where people post snapshots of everyone’s favorite cetacean. Users can vote posts up or down, and through crowd curation the most favored items ascend to Reddit’s front page. In this way, the site has become the web’s foremost meme engine, the place where things go viral, and with 200 million regular visitors, it is able to unblushingly call itself “the front page of the internet.”

But more than other user-generated sites, such as YouTube and Wikipedia, Reddit over the years has developed a culture that can at times be untamable. It is one that venerates anonymity and free speech and the idea that you can find your tribe, however small and marginalized, within the site, and it is reflected in the company’s power structure: The number of people the site employs is dwarfed by the horde of moderators who voluntarily tend to the individual sub-Reddits and make the whole thing run.

The Reddit mob has been responsible for charming acts of mass whimsy (there’s a sub-Reddit for Redditors to send pizzas to each other, unbidden) and semi- regular demonstrations of the uplifting powers of a beneficently mobilized crowd (more than 200,000 people took part in last year’s Secret Santa gift exchange). It has also accommodated some of the most odious content on the internet, including the sub-Reddits Jailbait, Pics of Dead Kids, Fat People Hate, Beating Women, Gas the Kikes, Trans Fags, and Watch Niggers Die—all of which Reddit eventually banned, but only after much fretting over whether doing so would compromise the site’s ethics and drive away its users.

Over the years, whenever crises around controversial sub-Reddits would make the news, Huffman mostly empathized with his successors at the company: Dealing with toxic content was a nettlesome issue, and he was glad he wasn’t the one who had to figure out how to do it. Plus he was busy with his new company, Hipmunk, an airfare- comparison site. But Huffman’s perspective shifted over the July 4 weekend, after he learned that a Reddit employee named Victoria Taylor had been fired.

Taylor had a critical role at the company: She ran the popular Ask Me Anything sub-Reddit, wherein a vacuumcleaner salesman or, say, the president of the United States fields questions from Redditors. She was also seen by her moderator colleagues as one of the only people at headquarters who understood just how desperately moderators needed better tools to keep the site running smoothly in the face of increasingly provocative factions within the ever-larger community. Though it now appears Taylor was dismissed because she was resistant to innovations like adding videos to the AMAs (Taylor didn’t respond to interview requests), she was fired with no public explanation, and her sudden dismissal brought moderators’ simmering grievances to a boil. In an event that would come to be called AMAgeddon, a rolling blackout began, and by Friday night, moderators had shut off the lights in hundreds of the most popular sub-Reddits in protest. News spread to Huffman. “Seriously, like 50 people texted me and said you need to go back to Reddit,” he says. The next day, he was up in Sonoma for a friend’s 30th-birthday party, and “a lot of the conversation was, ‘What the hell is going on at Reddit right now?’

Huffman had always thought he’d come back eventually. After then-CEO Yishan Wong left Reddit in late 2014, Ohanian had returned as executive chairman, and since then, he’d repeatedly asked his old friend to join him as CEO. Huffman had always declined, citing Hipmunk, but now he found himself scared for Reddit’s future. An insurrection was under way. “I felt like, This is getting out of control, I think it is reparable, but I need to do something now,” Huffman says. “That’s when I finally called and said, ‘Fine, I’ll do it.’” It was Sunday, and the first person he could reach by phone was board member Sam Altman.

Of course, Reddit already had a CEO at the time: Ellen Pao, who had stepped in as interim leader after Wong’s departure and who had previously worked at the venture-capital firm Kleiner Perkins. While at Reddit, Pao was in the news for having filed a gender-discrimination suit against Kleiner; though the jury ruled against her, her suit had brought attention to the challenges women face in Silicon Valley, and Pao’s experience over the next few days would play out as a nightmare version of some of those same issues. There was a feeling within Reddit that she wasn’t of Reddit—that it wasn’t a site she would choose to spend a lot of time on if it weren’t her job and that she failed to grasp the importance of managing its relationship with moderators. She became an easy scapegoat for the predominantly young and male Redditors, who, very maturely, had taken to calling her Chairman Pao. A Change.org petition for her to resign quickly gained more than 200,000 signatures.

On Monday, July 6, Pao apologized for Reddit’s negligent handling of moderators, but by then Huffman was waiting in the wings. Altman announced her departure that Friday while simultaneously announcing Huffman’s return. The next week, Ohanian acknowledged that the decision to fire Taylor had been his, calling the company’s general insensitivity to moderators’ needs “a big screwup,” which he took “a ton of responsibility for.” In a good-bye post on Reddit, Pao wrote that she had “seen the good, the bad and the ugly” among Redditors and that “the ugly made me doubt humanity.”

The bile thrown at Pao unnerved everyone. “She did some things I don’t think were particularly good decisions,” Altman says, “but CEOs make bad decisions, and I don’t think the community would have treated her as it did if she were a man.” Wong took to Reddit to suggest a theory that Pao’s exit was the penultimate falling domino in a long con by Reddit’s founders, who had orchestrated a series of events with the ultimate goal of prying the site out of Condé Nast’s control.

If the story line was short on evidence and possibly paranoid, it nonetheless tracked Huffman’s psychic trajectory: The pure-hearted founder had come home to save his wayward corporate child. “It’s kind of an egotistical thought,” Huffman says, “but I felt like I’m literally the only person in the world who can fix this and I had a moral obligation to do so.”

As he says this, we are sitting in a conference room at Reddit’s San Francisco headquarters, late on a Wednesday afternoon. Huffman has been back for only a month and is wearing the non-messianic uniform of a geek plutocrat: jeans, T-shirt, V-neck sweater, box-fresh red-striped Adidas, Pebble watch.