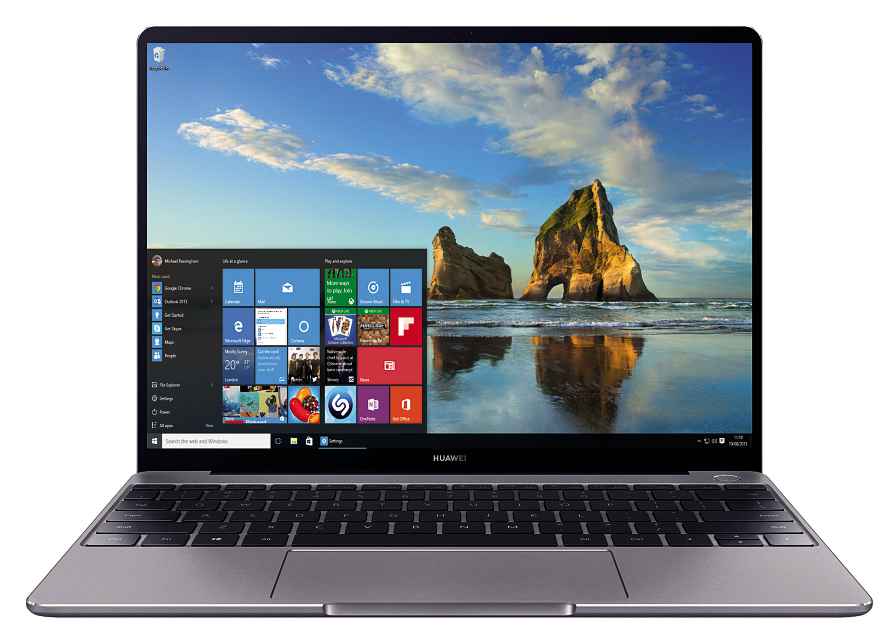 VERDICT What the MateBook 13 lacks in flourish, it makes up for in value and performance

THERE’S NO SHORTAGE of ultraportables to sift through, but that hasn’t discouraged Huawei from adding more to the pile. In fairness, the MateBook 14 (Shopper 376) and MateBook Pro X (Shopper 377) are both superb laptops, and with the MateBook 13 offering many of the same design ideas for a lower price, it could be another strong addition to the Chinese firm’s line-up.

There are a trio of models on sale in the UK: an entry-level model with a Core i5-8265U processor, 8GB RAM and 256GB of storage; a Core i7-8565U model with 8GB of memory and 512GB of SSD space; and a top-end model that adds Nvidia’s GeForce MX150 dedicated graphics. Huawei sent us the middle Core i7 spec but with a 256GB SSD, a combination we haven’t found on sale, but performance should be indicative. For the closest Core i7/512GB SSD model, expect to pay £1,000, while the cheaper Core i5 model is £799.

NOT FAR FROM THE TREE

The minimal industrial lines look like they were plucked out of the mind’s eye of Cupertino’s engineers. That’s no bad thing, as in its light grey or dark grey colour options, it’s pleasant to behold, and the silvery textured Huawei logo on the lid stands out nicely, too. Build quality is decent as well, even if the finish isn’t quite up to the same exacting standards as Apple’s.

Measuring 286x211x14.9mm and weighing in at 1.3kg, it’s not the smallest or lightest ultraportable around, but it’s small enough to pop into a backpack or laptop bag and forget about until you need it. You will have to factor in carrying a dongle, however, as the MateBook 13 only has a brace of USB Type-C ports (one with DisplayPort) and a 3.5mm headphone jack for connectivity.

Those USB Type-C ports are both USB3.1, meaning there’s no Thunderbolt 3 compatibility for connecting high-performance peripherals or external graphics card enclosures. Also disappointing is that only the left-hand port can be used for charging, which seems an oversight. The bundled dongle adds a full-size USB and additional USB Type-C port to the equation, as well as HDMI and VGA connections. There are more elegant dongles around, but at least Huawei included this in the package rather than charge extra for it, as Apple does.