Can Halo5 Save The Xbox? 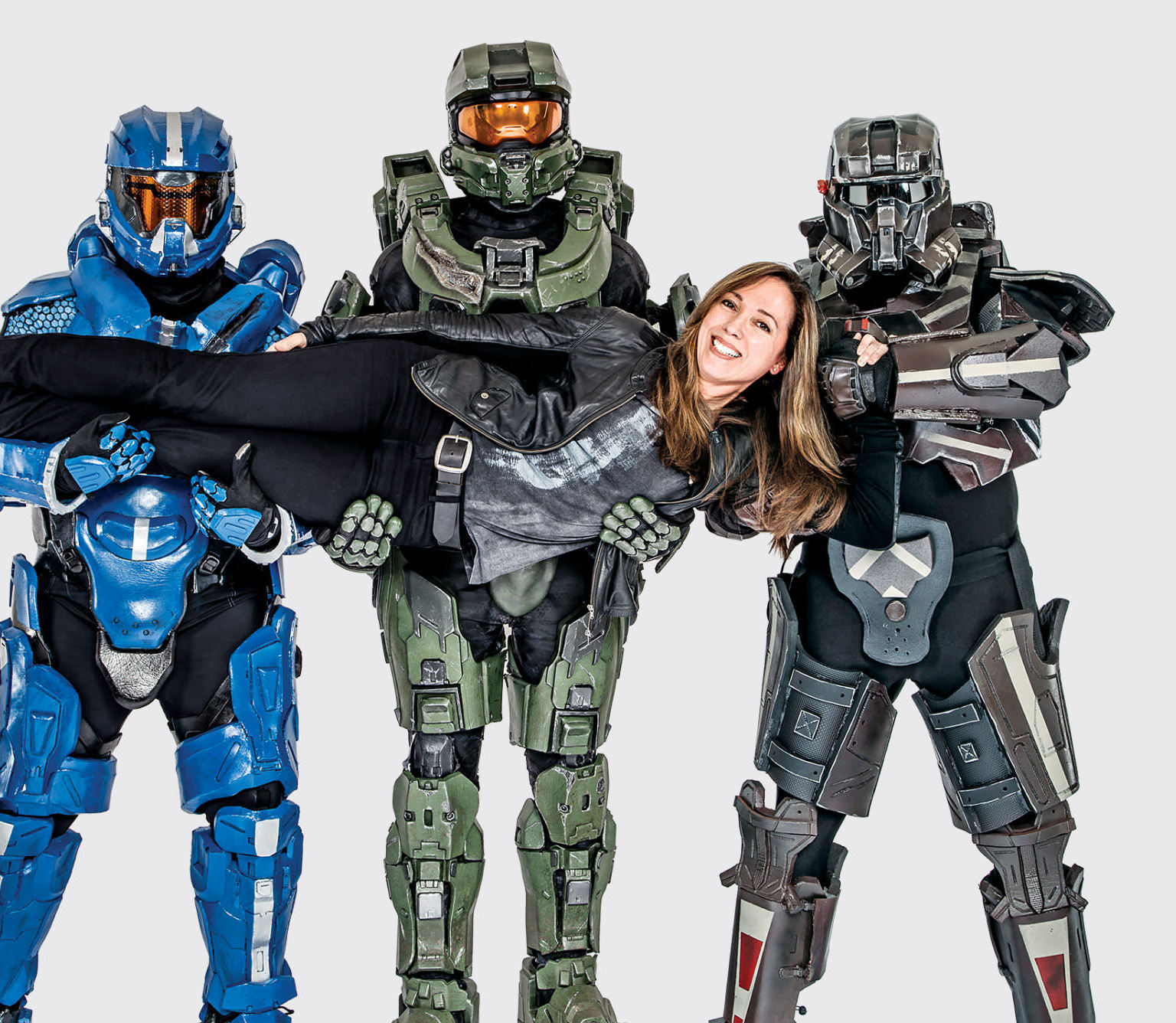 Can Halo5 save the Xbox? The career of one of gaming's most powerful women is riding on it.

The women’s volleyball locker room at the University of Southern California’s 10,000-seat Galen Center isn’t the most glamorous green room, but Bonnie Ross couldn’t care less. It’s June 15, and in 30 minutes, Ross, who’s in charge of Microsoft’s most valuable gaming franchise, will take center stage at the industry’s most important conference, E3. It’s the pitch of her career—a preview of Halo 5: Guardians, set to go on sale on Oct. 27.

Three years in the making, Halo 5 is widely anticipated to be one of the biggest game releases of 2015. Ross, 48, runs 343 Industries, a studio within Microsoft. She manages 600 people and has likely overseen the spending of more than $100 million for Halo 5 alone, which is typical for a release of this size. (Microsoft declines to give an exact figure.) It’s a huge production—and a chance for Microsoft to recoup its investment in Xbox One, which has lagged behind Sony’s PlayStation 4.

The fate of the Xbox has been linked to Halo since both debuted in 2001; Microsoft executives at the time said the platform probably would have failed had Halo not been such a smash years later, Ross still describes the game as a way to how good the Xbox itself is. “Halo is all about innovation and pushing our technology,” she says. “We feel like we’re pushing where we need to be, and pushing Halo.”

Five-foot-6, with long brown hair and an easy smile Ross is athletic and direct, and betrays no trace of the awkward intensity common among engineers. Nor does she wear the kooky fan-themed T-shirts that are the standard outfit of most game developers. At E3 she has on a leather jacket, jeans, and black leather boots. If she nervous, she’s covering well, staying upbeat. Still, she jerks to attention when Terry Myerson enters. “Sorry,” Ross tells me, excusing herself. “My boss just showed up.” Myerson, a Microsoft executive vice president, is in fact Ross’s boss’s boss. Their boss’s boss, Chief Executive Officer Satya Nadella, is waiting in a seat in the audience. He’s the first Microsoft CEO to attend the show in eight years. Even for one of the world’s largest companies, there’s a lot depending on this one game.

Halo’s influence is broad. Over the last 14 years, consumers have spent $4.6 billion on Halo products, about 25 percent of that on nongame merchandise. Microsoft has licensed the name to everything from special editions of Monopoly to a full bodyarmor suit that sold for more than $450. The first Halo book, a novel called Halo: The Fall of Reach, was actually published before the first game was released. For a time it looked like Peter Jackson, the director of The Lord of the Rings, might make a Halo movie. There’s now a Steven Spielberg television show in the works for Showtime.

When asked about her ambitions for Halo, Ross always comes back to Star Wars, which she adored as a kid. “For those of us that are a little bit older, we saw Star Wars and stood in line the first time around,” she says. “We are seeing the same thing with Halo, where a lot of dads and parents that started playing when they were 20 or 30 now have kids that are coming in through our, you know, Mega Bloks line.”

In the Lady Trojans locker room, Ross chats with several leaders of 343, among them Frank O’Connor, the franchise development director; Josh Holmes, the head of Halo’s internal development; and Tim Longo, 343’s creative director. It’s a wonder they’re all standing. Ross and her team have spent the previous 17 days fixing 700 software bugs in a “sprint,” as programmers call the race to meet a deadline. In one case, a flying armored man had gotten loose in the code and was floating around unmoored, liable to appear anywhere, even during a serious firefight. In another, someone in the art department had thoughtlessly stuck a rock in the path of a plane in a narrative scene. More disturbingly, the plane would fly right through it.

Excited by the Xbox One’s processing power, animators decided to build a fully interactive cactus that could move in different ways depending on where a gamer shot it. They blanketed one level with cactuses all the way to the virtual horizon. Even the new turbocharged Xbox couldn’t render the needles fast enough. At one point during the development process, the cactuses were the single biggest contributor to technical problems. Finally, the developers convinced the artists they had to go. Says Chris Lee, 343’s director of production.“There were hard feelings on different sides f out a month from the cactus fallout.”

Finishing the coding sprint, saving Microsoft’s console—all of this is top of mind as Ross strides to the stage, smiles, and waves. It’s a friendly crowd. “Let’s start tonight with the first Halo game—” she begins,but he’s immediately drowned out by applause. Thank you! That’s right—that’s where I want to hear the applause,” says Ross, before finishing her sentence: “—the first Halo game built from the ground up for Xbox One, and the game that fulfills both the promise of the Halo universe and the power of Xbox One.” Ross settles into her pitch. “Master Chief, hero or traitor?” she asks. “Spartan Locke, friend or foe? Epic worlds, epic battles, epic scale!”

The lights go down, and a trailer booms to life on a 50-footby-28-foot screen. A cyborg trains his assault rifle into the distance, and a fleet of spaceships flies over an alien landscape. A gravelly voice announces that Master Chief, the hero of the Halo epic, has gone absent without leave. Ross quietly disappears from the stage, as her deputies scan Twitter’s reaction on their Windows phones. A few hours later, she meets Holmes and O’Connor for lunch at a nearby steakhouse. They’re relaxed, elated, for one afternoon at least. The Twitterverse is pumped.

Bonnie Ross is a video game executive by happenstance. She was a good volleyball player in high school, but her father insisted she pass up athletic scholarships to focus on something useful. So she studied technical communications and computer science at Colorado State University, which led to an internship at IBM. She graduated, then applied to work at NeXT, Apple, and Microsoft; her first two choices never called back.

Ross started at Microsoft in 1989 but quickly got bored. She liked drawing a paycheck but had a normal human’s lack of enthusiasm for drafting manuals. “I just wanted to take a break, just for, like, one year, to work on something that my friends would understand,” she says. She talked her way onto a team developing a basketball game for Microsoft’s nascent video game business.