PEMS, RDE ON MOTORCYCLES AS INSTRUMENTS FOR FUTURE CHALLENGES 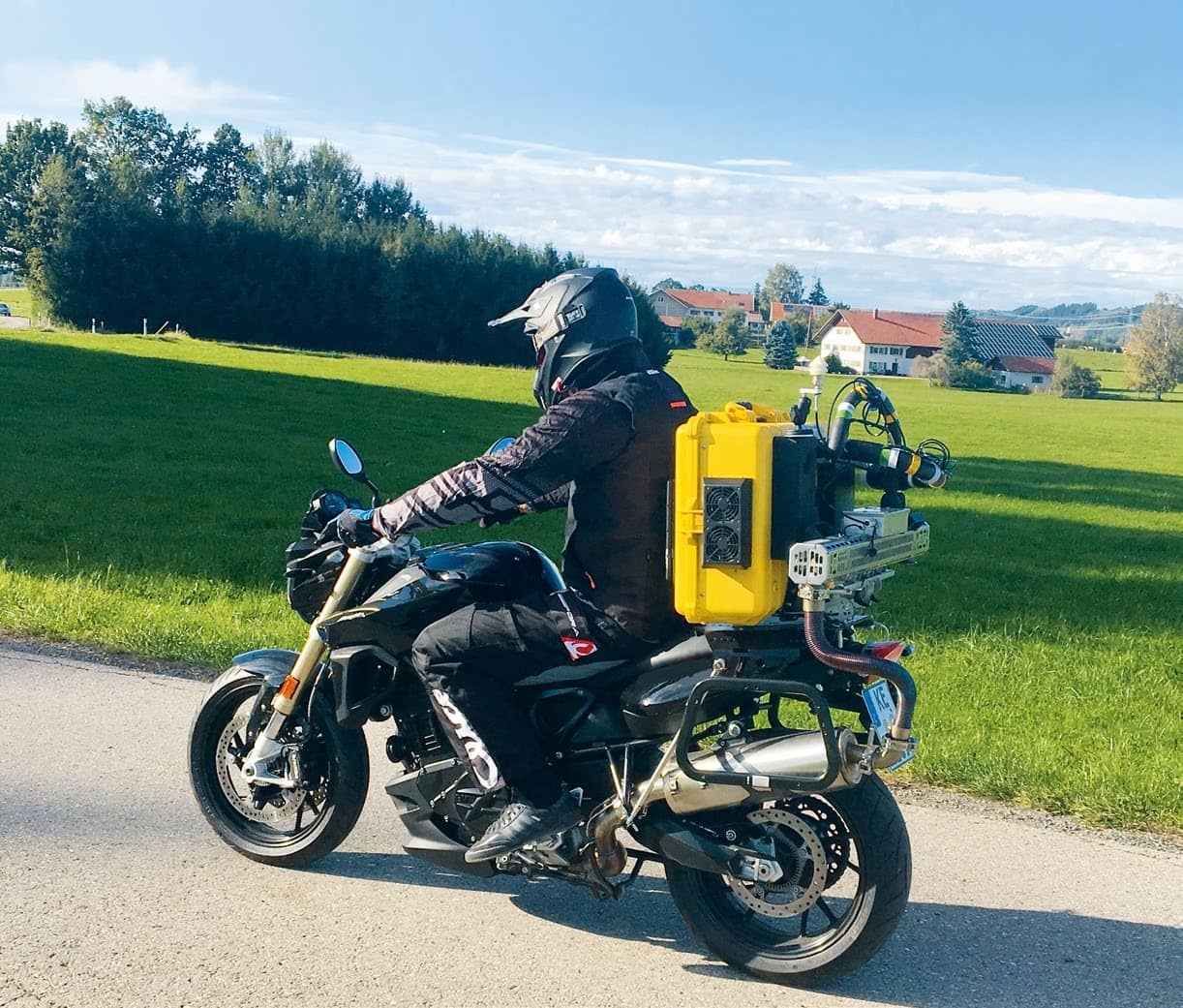 The current debate surrounding emissions and consumption of vehicles powered by combustion engines caused Kempten University of Applied Sciences to investigate the topic of RDE on motorcycles in cooperation with AIP-GmbH. The RDE scope specified for passenger cars was successfully transferred in terms of the measurement system, test procedure, and evaluation.

The development framework conditions – such as legal specifications, customer requirements and environmental requirements – are becoming increasingly complex for motorcycles as well. In addition, the topic of emissions caused by vehicles with combustion engines and their limitation has become the focus of explicit public attention in recent years. At the same time, times to market are becoming ever shorter and cost pressure is increasing.

This necessitates efficient methods for solution-oriented development. Flexibly usable, Portable Emission Measurement Systems (PEMS) for the motorcycle segment are an appropriate approach for processing future emission issues to be able to assess and optimise emission behaviour early on and thus accelerate the overall development process.

When the Euro 6d Temp passenger car legislation came into effect, the verification of adherence to emission limits in real-life vehicle operation was also introduced alongside a new test cycle (WLTC) for determining standard consumption and emissions. In the past, legislation for motorcycles has followed the passenger car regulations. When the Euro 6 standard is introduced for motorcycles in the near future, it can, therefore, be anticipated that measurements under real driving conditions will become mandatory. BMW Motorrad shows an example of the topicality of emissions and consumption in motorcycle development [1].

The prerequisite for PEMS measurements on motorcycles is a measurement system suitable for this purpose that meets the special requirements, particularly in terms of size and weight, but which also takes account of measuring technology challenges such as small, extensively pulsating exhaust mass flows. The AIP PEMS, which has been in use in the passenger car sector for a number of years, meets these requirements with its compact dimensions, its robust design with completely closed and watertight hard case, and its weight, which is low in comparison with other systems.

1 (left) shows the individual system components for the motorcycle application. The basic carrier (i) is bolted to the motorcycle’s luggage rack using a hole pattern and is stabilised by additional braces that are fastened to the pillion footrests. The PEMS (ii) is equipped with a quick-fitting system, as is usual for motorcycle luggage cases, and can be fastened with just one click. The Exhaust Flow Meter (EFM) (iii) is clamped on a mounting rail, transverse to the direction of travel, on which it can be moved, thus ensuring the necessary flexibility during set-up. Pipes, elbows, and flexible pipes of corresponding diameters are available for connecting the exhaust pipes. Connections are carried out using V-band clamps, which can be fitted without tools. When ready for measuring, the overall system including carrier weighs only approximately 50 kg.

The entire set-up must be regarded as cargo according to Section 22.1 of the German road traffic regulations (StVO) and must be secured according to the recognised technical rules. Appraisal according to Section 19.2 of the German vehicle licensing regulations (StVZO) or an entry in the vehicle documents is not necessary. â‘ (right) shows the set-up on the test object, a medium-size category motorcycle with a curb weight of approximately 200 kg and a two-cylinder inline four-stroke engine (65 kW, 800 cc), which is certified according to Euro 4.