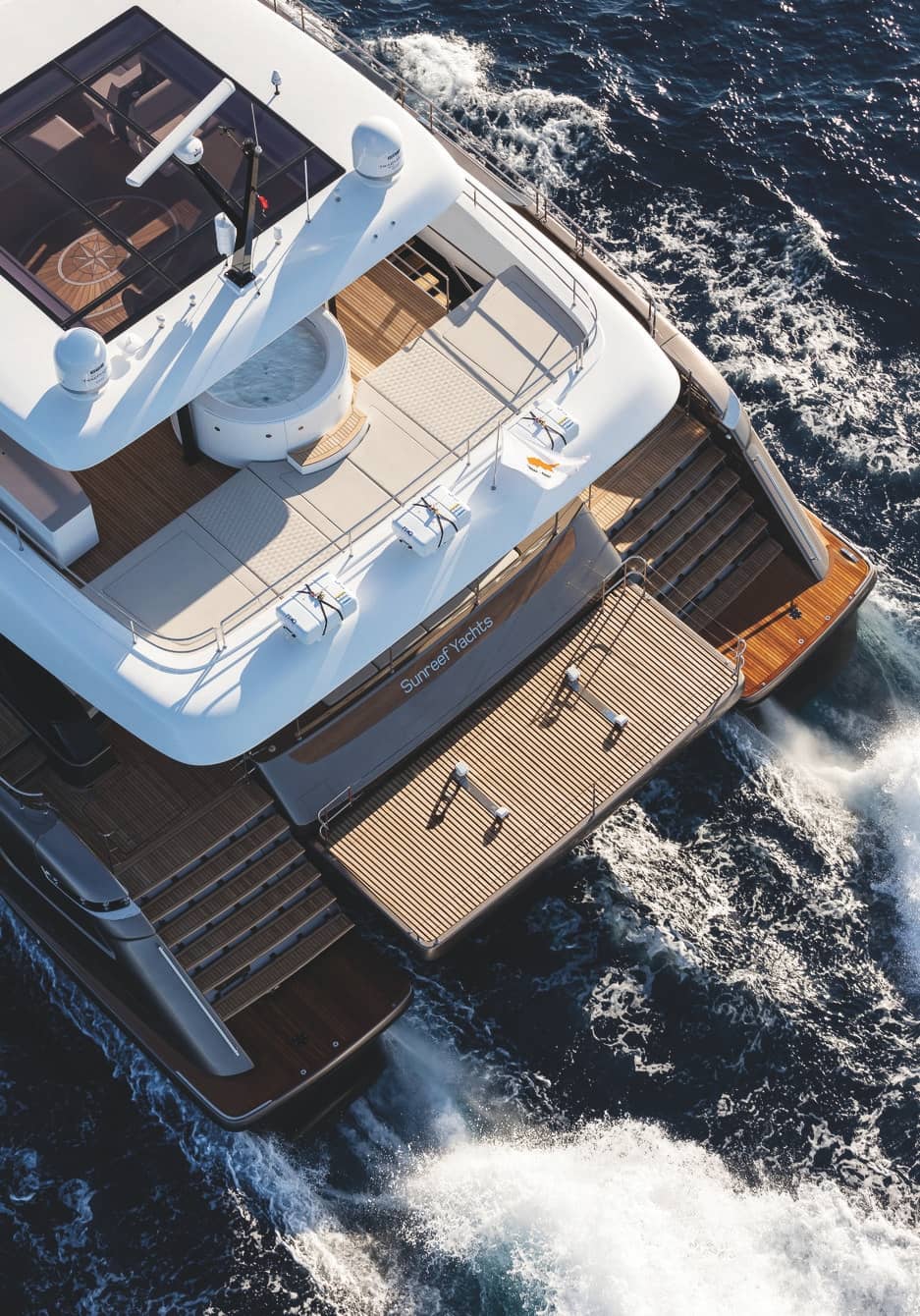 Power catamarans are increasing in popularity as well as size, with Asia showing a growing appetite for multihull motor yachts from production and semi-custom builders.

It has been a whirlwind past 12 months for power catamarans and there’s a lot more to come in the coming months, with world debuts of new brand flagships set for this year’s Cannes Yachting Festival and Fort Lauderdale International Boat Show. Before then, tennis icon Rafa Nadal is due to take delivery of his 80 Sunreef Power in May (see REVIEW), eight months after the model’s debut at the Cannes show last September. Since then, Sunreef has announced it’s building new 100, 110 and 49M (161ft) models, and it’s also preparing to showcase its ‘entry-level’ 60 Sunreef Power at Cannes this year.

Lagoon premiered a red-hulled version of its Sixty 7 (see REVIEW) at Cannes last year, since when Simpson Marine has sold at least two to Asia before recently welcoming the brand’s flagship Seventy 8 to Singapore, the model’s first unit in the region.

Singapore is also home to Leopard’s new flagship powercat, the 53 PC (see REVIEW), which debuted in Miami in February. Singapore also has ties to Royal Falcon One as a residence of the developer of the futuristic 135-footer, which was designed by Studio F.A. Porsche, built in Sweden and displayed outside the Monaco Yacht Show last year. 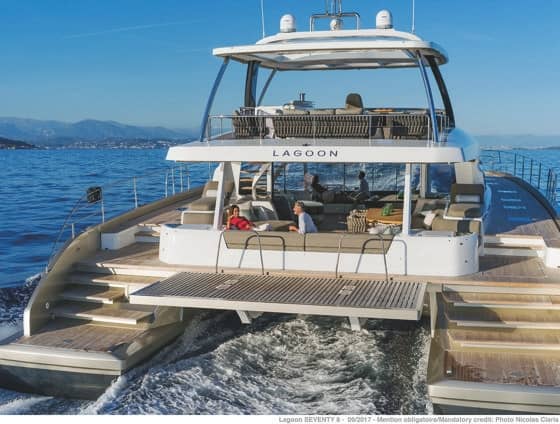 Fountaine Pajot, which showcased its new MY 40 at last year’s Singapore Yacht Show, has launched its first Power 67, which will show at Cannes in September, while China-based Aquila is busy completing its first 54 and 70 models in Hangzhou for their debuts at Fort Lauderdale.

In China’s southerly Guangdong province, Zhongshan-based Kingship launched a customised 79ft aluminium catamaran late last year, while new brand ILIAD builds in Zhanjiang and will launch its 60 this year following the debuts of its 50 and 70 at Australia’s top shows last year (for more details on ILIAD, see separate article).

Austrian-owned Silent-Yachts, which builds its Silent 55 in Qingdao, announced six sales of its flagship 80 this April, with the first hulls still under construction in Italy, while it’s also completing the first units of its new 60 model in Thailand and Italy.

As we focus on production or semi-custom multihull builders for this article, Lagoon and Sunreef kick it off as the kings of big cats, having launched popular production models in the 24m range, both sailing and power.

Lagoon premiered its Seventy 7 sailing yacht and Seventy 8 motor yacht at Cannes in 2016 and 2017 respectively, before the Sunreef 80 then the 80 Sunreef Power were the show’s biggest catamarans for the following two years. 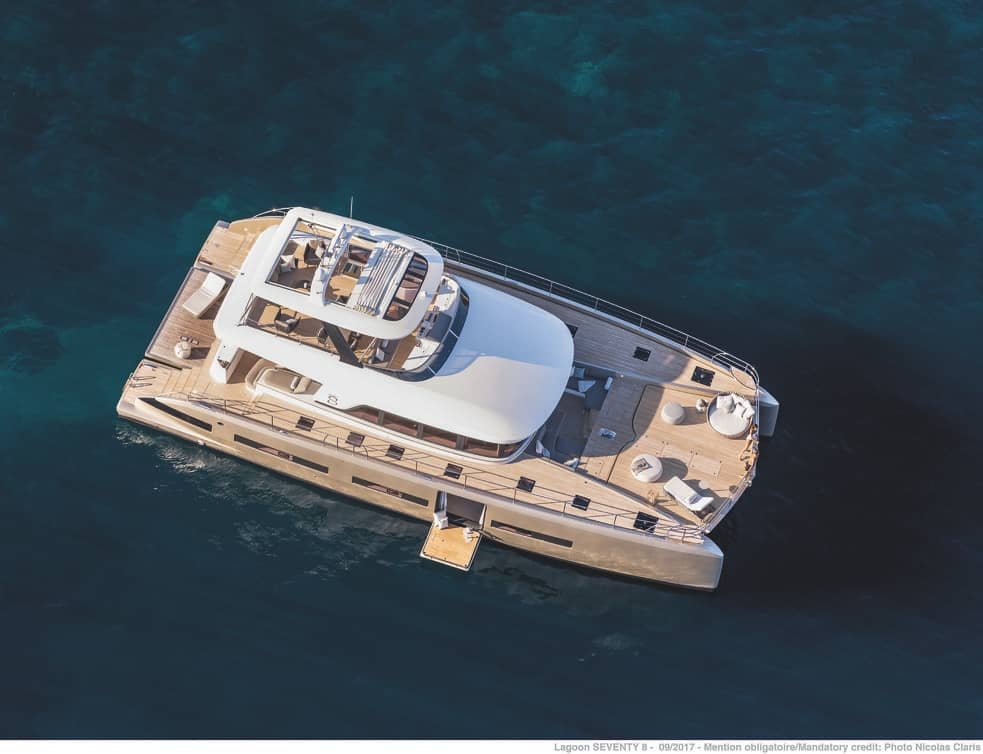 Sunreef is currently completing an 80 Power for a client in China, while late last year it announced it was building a 110 model and a 49M, before more recently announcing the sale of a new 100. The Polish luxury catamaran specialist is also busy completing the move to its new facility in Gdansk and rounding out its new powercat range with the 60 and 70.

Francis Lapp, who founded the yard in 2002, estimates that once the latter two models are launched on the market, powercats will make up about 30 per cent of Sunreef’s annual sales.

The Frenchman publicly announced that the recent surge of large catamarans was ‘one of the most interesting evolutions’ in the luxury yacht industry, yet says he’s not threatened by new players on the market.

“We make custom boats, so we don’t see any competition. It’s not a custom boat when you only change the colour of the wood,” said Lapp, whose company of about 800 staff more than doubled its 2018 turnover last year.

“Custom is when I sit with the client and he says, I want this table here, I want the TV there, I want to change the bulkheads. We can even develop new engineering for clients.”

Stability, space and fuel efficiency are among the well-known attractions of catamarans, but the beam provided by twin hulls can also lead to expensive berthing fees. Lapp says his clients aren’t so affected by this, as he believes catamaran owners are more interested in cruising and destinations than marinas.

“Generally, our clients aren’t in marinas a lot, maybe only for fuelling. Most of the time, they’re sailing or anchored,” he says. “I’ve seen monohull motor yachts with only 500 hours on the engines after two to three years. We have power catamarans with 6,000 hours or even 8,000 hours, like our previous 70 Power.

“Our owners are travelling all the time. After all, when you’re in St Tropez or Nice and you want to go to Corsica, if it’s bad weather you can’t go with a monohull of 25-30m, but you have no problem with a catamaran.” 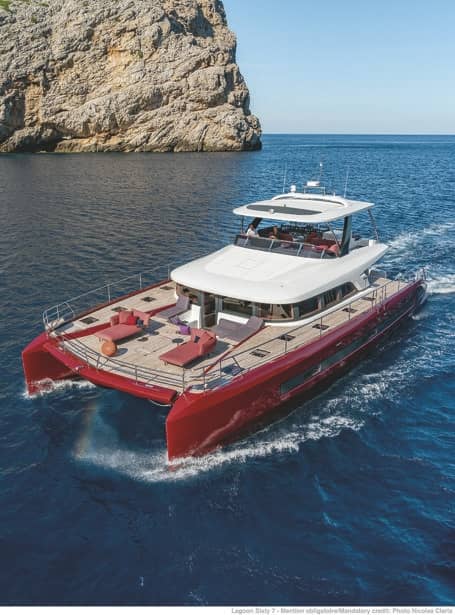 Lagoon is the world leader in production cruising catamarans, having produced more than 5,000 since it was founded as an offshoot of Jeanneau in 1984. It’s also the leading catamaran brand in Asia, where long-time dealer Simpson Marine has sold over 400 units including the region’s first Seventy 8, which arrived in Singapore in March.

But while the French builder offers a dozen or so sailing models from the 40 to the Seventy 7, it only produces large powercats, having discontinued models like the 40 MY.

Its current motor yacht range comprises the 630 MY, the flagship Seventy 8 and the new Sixty 7, which has been sold by Simpson Marine to clients in Malaysia and Taiwan. In February, Philippines dealer Europa Yachts organised a group of Lagoon owners to view the Sixty 7’s US debut at the Miami International Boat Show.

A Beneteau Group brand, Lagoon builds in three sites in France, but all of its motor yachts are produced in the western city of Bordeaux along with all of the brand’s sailing models over 50ft. Lagoon now has more space to work with after the production of CNB’s monohull sailing yachts was shifted from the Bordeaux site to Italy.

Thomas Gailly, Lagoon’s Commercial Director, says: “We have 1,200 people in Bordeaux working on big units that take quite some space and require a specific building pace. It’s a lot, but still not enough to satisfy the demand from the market!”

Gailly says demand for big powercats has built up gradually over the last few years, led by the first hull of the 630 MY, which completed a transatlantic crossing before its US debut at Miami in February 2015.