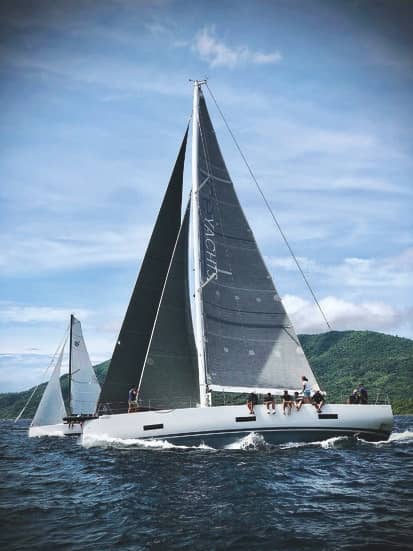 Overseas yachts will be invited to next year’s Busuanga Cup, which made a strong debut this year as it combined the Nasugbu to Busuanga Race with a new island race.

Jun Villanueva’s Ice 52 Belatrix set a record in this year’s Busuanga Cup, which incorporated the Nasugbu to Busuanga Race held since 2017 and added an island race dedicated to the late Doni Altura.

For the previous three years, the Nasugbu to Busuanga Race featured a 134nm route from Punta Fuego Yacht Club to South Cay, an islet off Busuanga Island in northern Palawan. A race with a difference, boats were given a window in which to set off, requiring tacticians to study the weather to determine the best start time, with results determined from corrected times.

Organiser PHINSAF extended this year’s event to become more of a regatta, with the Nasugbu to Busuanga Race followed by the Doni Altura Memorial Race around the island.

Following an opening party sponsored by Punta Fuego Yacht Club, boats could choose their start time the next morning between 6am and midday. At 6.09am, the first boat away was Henry Hauck’s Columbus of Puerto Galera Yacht Club, while the last boat out at 8:09am was James Villereal’s Wild Honey of Manila Yacht Club.