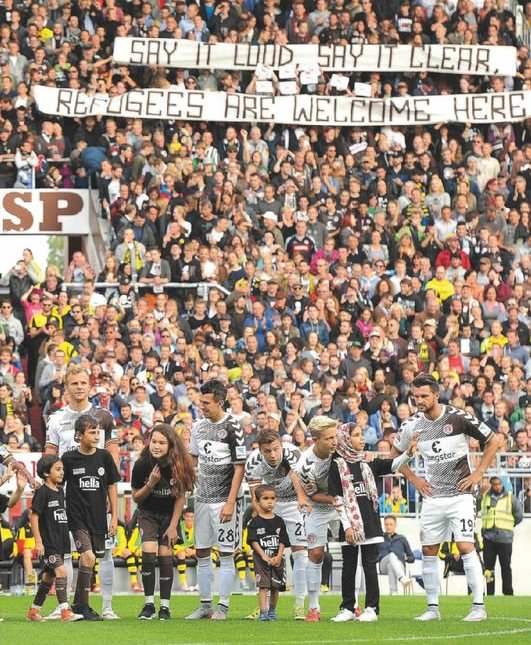 The players were led out hand in hand by the children of refugees as the crowd in all four stands stood to applaud. When the teams from Borussia Dortmund and St Pauli reached the middle of the pitch, the messages were raised too.

Homemade signs, some made out of ripped up cardboard boxes, next to flags and more professionally-made posters. Some were in English, some in German and a few in Arabic. Next to them, larger banners were unfurled that sent a message not just to fellow fans, the players and the clubs, but to the outside world.'

“No Border, No Nation,” read one. “Say It Loud, Say It Clear, Refugees Are Welcome Here!” read the biggest.

At present, Europe has been gripped by the worst refugee crisis since the end of the Second World War. Tens of thousands have arrived in Europe on a daily basis, the vast majority of which are fleeing the civil war in Syria, where over half the country has now been displaced.

As their numbers have grown, so has the political opposition and mistreatment at the hands of the authorities, especially in Hungary. But two moments have shifted the mood. The first was the discovery, in August, of a refrigerated truck, abandoned on a highway in Austria, crammed with the bodies of 71 refugees who had suffocated. The second was a picture of Aylan Kurdi, a three-year-old Syrian Kurd found dead, face down on a beach in Turkey.

St Pauli’s Millerntor-Stadion in Hamburg has long been used to political banners and campaigns organised by the fans.The team comes from the working-class St Pauli district famous for its activism, socialism and, along the backstreets of the Reeperbahn, its hedonism too. They have built a reputation not just as a cult football club, but perhaps the most moral side in world sport, having campaigned from the terraces upwards on everything from gay rights to racism to mental health. And this match, a friendly against Dortmund during international week, was to be no different. It was decided that the match would be dedicated to refugees. One thousand tickets would be given free to recently arrived refugees. But for once, St Pauli weren’t the black sheep of the party. The mood had changed in German football. The now ubiquitous “Refugees Welcome” banners had already started appearing at almost every Bundesliga match, as supporters attempted to inject some humanity and realism into the mass exodus. Across the game, clubs lined up to help. Bayern Munich offered 1m euro (£735,000) and the setting-up of a football camp for refugees. Real Madrid and Paris Saint-Germain matched that, while Roma announced they would donate just under £500,000. The German football federation, the DFB, launched the “1-0 for a Welcome” project, with the aim of offering 500 euro (£370) payments to clubs who assist refugees and migrants.

“We want to assist amateur teams to help refugees play football quickly and without complications,” said DFB president Wolfgang Niersbach. Referring to the photo of Kurdi, Roma’s American owner Jim Pallotta said: “The final straw was  seeing the pictures of refugees and the three-year-old dead on the beach. If that can’t affect you then nothing will.”