Nameless crew may be better off 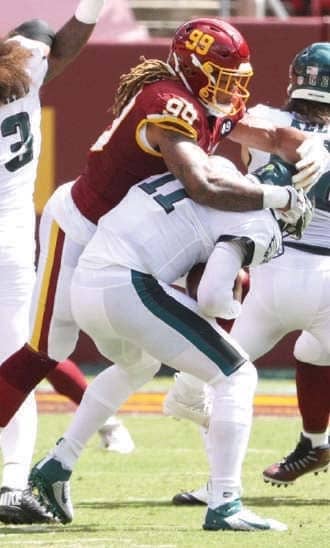 NO PRESSURE, NO DIAMOND

Names like Fearsome Foursomes or The Sack Exchange don’t come easy. If Chase Young and the Washington defense want one, they will have to earn it.

Eight sacks – that will get some attention.

That deserves some attention. Heck, I’ve seen some Redskins defenses that would crown themselves king of the world just thinking about eight sacks, let alone actually accomplishing it, like the Washington Football Team in their week one win over the Philadelphia Eagles.

Remember Capital Punishment? That was the name the Redskins front defensive unit had given themselves in training camp in 2015 – before they took a snap in the regular season.

“Now we have to live up to the name and go out and punish people,” Chris Baker said.

That defense was ranked 28th in yards allowed in the league that season. They had 38 sacks, tied with two other teams for 14th in the league.

Perhaps one of the changes we will see under new coach Ron Rivera is the propensity for talking before delivering. There were certain expectations for this 2020 Washington Football defensive front before game one. But eight sacks? That is Capital Punishment.

There were those legitimate expectations because, unlike 2015 and past seasons, this wasn’t a patched-together defensive front full of cast-offs. The 2020 unit is a home-grown group of top-ranked talent coming out of college.