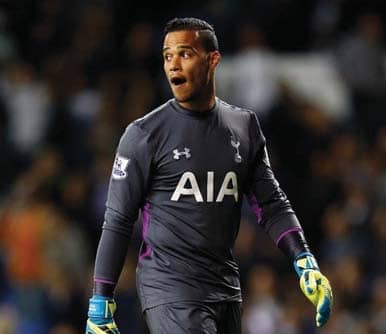 We all have our favourites when it comes to past Spurs kits and, sometimes, they can evoke memories of specific games, moments and the players who wore them.

Continuing our series for the 2019/20 season, Billy Shaw chats to our players – past and present – to find out what comes into their minds when they look back at a selection of our shirts from seasons gone by. This evening, Michel Vorm remembers some of our goalkeeping jerseys from recent years…

“That was from my first season at the Club,” said Michel as he examined our grey goalkeeping uniform from 2014/15, which featured bright pink panels down the sides of the body and on the cuffs of the sleeves.

“If I see this kit, I think of the run to the League Cup Final in 2015 and my debut against Nottingham Forest in the early rounds.

“This was the away version, but to be honest it’s difficult to remember too much about it.

“Really, looking at this, it just takes me back to White Hart Lane. It was so special to play there – I know I played against Forest in this colour and I think I might have also played in this when we went to Sheffild United in the semi-final and it snowed. I couldn’t tell you – I can’t even tell you about everything I’ve worn this week to be truthful!”

Clearly Michel’s memory is better than he thinks, as he did indeed wear grey at Bramall Lane in the second leg of our League Cup semi-final back in January, 2015.

The home version of this shirt – a reversal of the colours seen here, with the main body of the kit in pink with grey detailing – was more commonly used throughout that campaign, notably by Hugo Lloris in the final of the aforementioned competition.