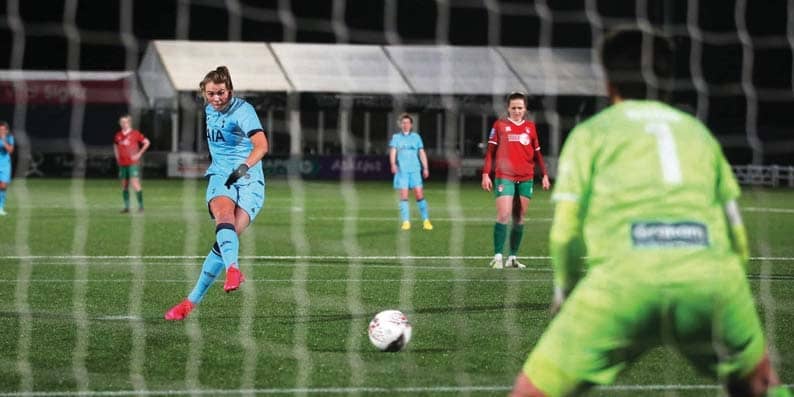 Rianna Dean scored a hat-trick in a commanding 5-0 win over Coventry United as Spurs Women secured a place in the quarterfinals of the Women’s FA Cup for the first time in our history recently.

Our number nine converted two penalties in the first half after Siri Worm opened the scoring and Lucia Leon made it 4-0 after the interval.

Dean completed her hat-trick shortly before the final whistle to seal our place in the next round of the cup, where we will face Arsenal - who beat Lewes in the fifth round last Sunday - at Meadow Park on Sunday 15 March, kick-off 1 pm.

Karen Hills and Juan Amoros made four changes to the team who earned a valuable draw against Everton the previous midweek as captain Jenna Schillaci, Leon, Worm and Angela Addison were introduced into the starting line-up at Butts Park Arena.

We dominated from the off and Ria Percival should have fired us ahead with a powerful header from close range, but her attempt was saved well by Sue Wood in United’s goal, following a sublime ball in from former Coventry player Ashleigh Neville.

Moments later, Worm played a short corner to Gemma Davison, before curling it into the top left to give us a warranted lead in the 19th minute.

Dean doubled our advantage just under 10 minutes later after she was fouled in the box by Hayley Crackle and stepped up to fire home a well-taken penalty past Wood into the top corner.

The forward scored once again on the brink of half-time from another penalty, this placing it into the bottom left corner after Addison was clipped in the box by Maz Gauntlett.

After the break, Leon bagged our fourth of the game in the 78th minute with a tap-in at the back post following an exquisite delivery from substitute Lucy Quinn.

Quinn registered another assist 12 minutes later as Dean headed in her cross for her hat-trick and sealed a comfortable win against the Championship side to guarantee our place in the quarter-finals in two weeks’ time.