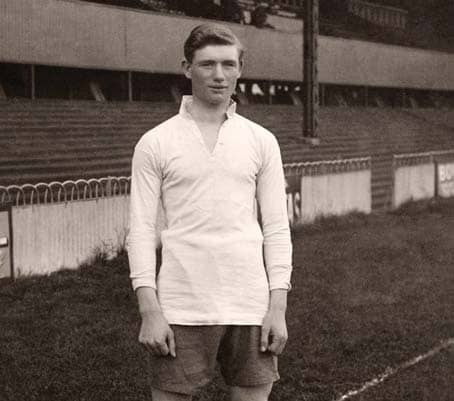 Looking back on players spotted by Spurs playing locally in schools’ football – and who went on to star in our first team. Today, we celebrate the writing of our late, great club historian Andy Porter who composed this tribute in May 2005.

Edmonton born Jimmy Dimmock had played for his country and scored the winner in an FA Cup Final by the time he was 21 years of age.

Described by a contemporary as having complete mastery of the ball, a brilliant sense of timing and a cannonball shot with either foot, Dimmock was with Tottenham throughout the Twenties.

He still holds a unique place in our history as the only man to reach 400 League appearances and score 100 goals in our colours.

Dimmock had attended Montague Road School and turned out for Park Avenue, Gothic Works and Edmonton Ramblers when spotted by Spurs and signed on amateur forms on 3 December 1918.

He was loaned to Clapton Orient for the remainder of the season and played in their war league side before returning to sign professional forms for Spurs in May 1919.

On 30 August 1919, Jimmy made his Spurs debut in a reserve team fixture against Chelsea and two days later notched his first goal in a 6-4 London Combination win at Fulham.