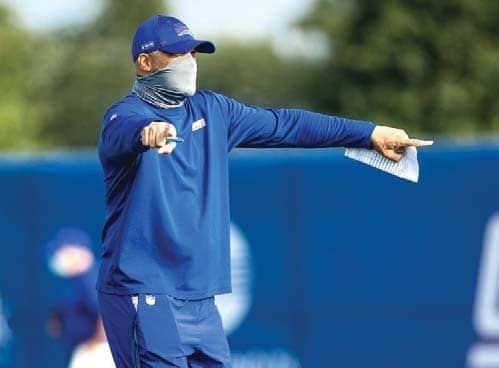 G-MAN ON THE G-MEN

The NFL may as well go by the UFL this season, for ‘Uncertain Football League’. Following an MLB season comically reduced to 60 games and an NBA campaign requiring a bubble to survive, the NFL season heads toward its own choppy waters. Whether those waves flow into violent white-water rapids signaling early dismissal, or a serene river representing a full schedule, nobody really knows.

Deeply entrenched in the land of uncertainty lies the New York Giants. Or as folks of a certain age and fan mentality like to call them, the New York Football Giants.

Whatever your preferred name – and ‘perennial top-10 draftee’ isn’t an option – the Giants are a wild unknown entering training camp and, more recently, the debut of padded practices on the third Monday of August. In fact, these Giants actually appear, as a nice glossy team photo when you Google U-N-C-E-R-T-A-I-N-T-Y.

Go ahead and try it.

But do trust me when I declare that this team bleeds more unknowns than a U.S. Postal Service balance sheet. Let’s spell it out:

U – For underdogs. You would be hard-pressed to find another NFL team with the dangerous combination of question marks and schedule difficulty. The Giants could easily wind up being underdogs in 14 or 15 games. They certainly aren’t going to be favored in any of the first five games – vs. Pittsburgh, at Chicago, vs. San Francisco, at Los Angeles Rams and at Dallas – before getting a more comparable opponent in *Washington.