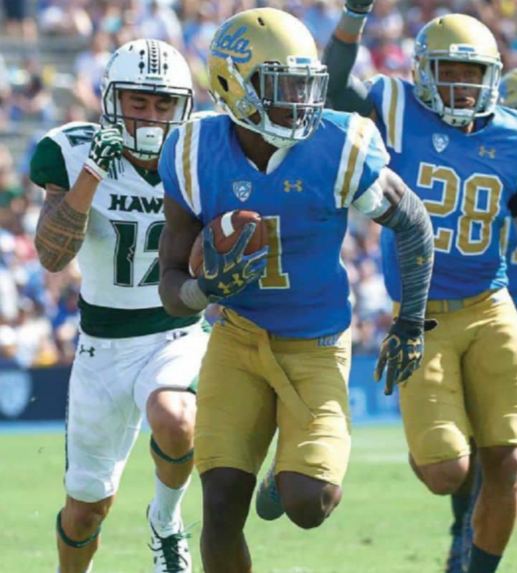 The Giants added another young player to their secondary when they selected UCLA cornerback Darnay Holmes in the fourth round of the draft. General manager Dave Gettleman is proving that he recognizes the importance of rebuilding this unit by bringing in young players.

Holmes was born in Pasadena, California. He is the son of former Buffalo Bills running back Darick Holmes. He attended Calabasas High School, where he played cornerback, wide receiver and he also returned kicks. Holmes was rated as a five-star recruit and the No. 4 cornerback prospect in the nation by rivals.com. He decided to stay local for college and committed to play football at UCLA.

As a true freshman in 2017, Holmes played in 13 games, starting 11 of them. He had 39 total tackles, three passes defensed and a team-leading three interceptions (including a pick-six). Holmes had an even bigger impact on the Bruins’ defense during his sophomore season, as he recorded 48 total tackles, eight passes defensed, three interceptions (including a pick-six), two forced fumbles and one fumble recovery in 12 games played. He led the Bruins in interceptions and forced fumbles. Holmes returned a kickoff 93 yards for a touchdown during a loss to Stanford. He was named a 2018 honorable mention All-Pac-12 selection by the league coaches.

Holmes missed the first two games of his junior season in 2019 due to an ankle injury. He started the remaining 10 games for UCLA, and had 33 total tackles, six passes defensed, two interceptions and one fumble recovery. For the third time in his collegiate career, Holmes led his team in interceptions. He was again named an honorable mention all-conference selection by the Pac-12 coaches. Holmes was able to graduate from UCLA in less than three years.