LILLY ALLEN AND AUSSIES SAW THE TRUE WORTH OF ONIONS 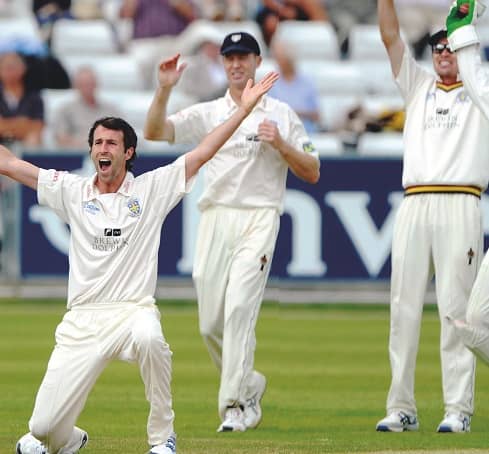 No visiting batsman relished playing at Durham’s Riverside Ground in the first decade of the new millennium, not with Graham Onions and Steve Harmison bearing down on them Duke ball in hand.

At the time it was the most potent combination in English cricket – bone-crunching pace from one end precision sniping from the other – and most wilted.

Durham won successive County Championships in 2008 and 2009 with the pair rampant alongside other seamers like Callum Thorpe and Liam Plunkett. Onions, though, who announced his retirement from the game this week at the age of 38, was still knocking batsmen over when the county won another Championship pennant in 2013, his relentless pursuit of wickets still a feature.

The reason stated for calling it a day is a second back injury, following the one which incapacitated him for most of 2010 and left him with a metal rod in his back. It is nature’s way. Few pace bowlers remain a useful force once they pass 36, though like James Anderson, a man of similar pace and build, Onions did possess a high skill quotient which kept him relevant beyond that age for both Durham and, latterly, Lancashire.

Onions played nine Tests for England between 2009-12 taking 32 wickets at 29 and would surely have played many more had Anderson not been a direct contemporary.

Eight of his Tests were alongside England’s greatest wicket-taker but generally they were mutually exclusive, both being specialist pace bowlers without much to offer with the bat.

Not many modern teams contain two ‘rabbits’ if it can be avoided and while various injuries set Onions’ cause back the arrival of Stuart Broad and Tim Bresnan, both seam bowlers capable of getting the odd fifty, consigned him to the role of Anderson understudy, though one made redundant by the extraordinary consistency and fitness of the principal.

Suitably ironic then, given Onions’ perceived lack of ability with the bat, that he is as famous for two defiant rearguards against South Africa as any bowling feat – his stout defence twice defying the Proteas in the 2009/10 Test series when defeat looked certain. On both occasions, the first in the opening Test at Centurion the second in Cape Town, Onions held fast facing the final over, initially against Makhaya Ntini, then against Morne Morkel, both fine pace bowlers. Had he not survived England would have lost the series comfortably instead of drawing it 1-1.

Paul Collingwood, who played at Durham with Onions, was batting with him during the nail-biting finale at Centurion. “For some reason I took his offer of a single off the fourth ball of the penultimate over which left him to face the last six balls after I failed to pinch back the strike,” recalls Collingwood. “I was so wrapped up in saving the game that I forgot he was a No 11. Still, it’s one of my favourite memories when he held firm. There, and again in Cape Town.”