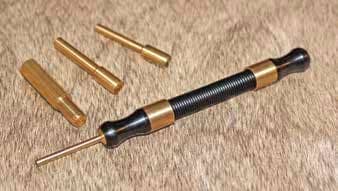 Steve Anderson has been at it again and is now offering a premium version of his Wyoming Sight Drifter. The original Wyoming Sight Drifter came on the market in late 2016. It is a rather wondrous little tool that should be in every rifleman’s toolbox and gunroom. In my opinion, the Drifter replaces a hammer and punch as being the best way to adjust dovetailed sights, as well as move stubborn pins.

The formula for Kinetic Energy is K.E.= ½ mv^2. I had to dig back through some old files from the engineering school to understand why in the world the Wyoming Sight Driver works so well. From the formula, you can see that the mass of the object only contributes half of its value, while the velocity value is squared before it is divided by two. What this means is that the spring on the Drifter moves the two-ounce weight fast enough to be as effective as a much larger handheld hammer.

To operate the Drifter, the tip is held against the surface that you wish to move. The other end is drawn back, thus stretching the spring, and then released, which snaps the weight forward and drives the tip against the thing you are moving. It is easy to vary the amount of force being applied by altering how far you stretch the spring. Small little taps will easily move the sight the smallest amount, while stretching it way out will really smack it and move the most stubborn of