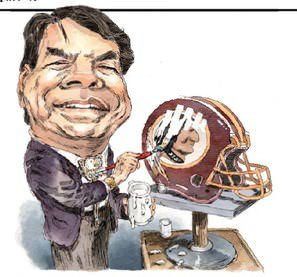 In the fight over the team's name, Ray Halbritter is an adversary unlike any the NFL has faced before.

Ray Halbritter, the leader of the Oneida Indian Nation, and Dan Snyder, the owner of the Washington Redskins, couldn’t be further apart on the question of the NFL team’s name. But in other ways, the two have much in common. Both are bullheaded multi­ millionaire CEOs who hate losing, which has made their clash nearly as bruising as the boxing matches Halbritter hosts at his casino in upstate New York.

I caught up with Halbritter in early April at Harvard Law School, his alma mater, where he’d come to give a lunch­ time talk. Halbritter, who is 65 but has a boyish face, had flown in on his tribe’s corporate jet. He wore a cashmere blazer and a gold Rolex. Martha Minow, the law school’s dean, who’d taught Halbritter civil procedure in the 1980s, wrapped him in a hug—“So good to see you!” Then Halbritter walked to the podium and lik­ened Snyder and his backers to those on the wrong side of the 1960s civil­rights movement.

“Back then, these forces of the status quo were sitting in the halls of Congress,” he told the audience of law students and professors. “Today they are sitting in an NFL team’s front office.”

Native American activists have been saying since the late 1960s that the Redskins’ name is a slur. But their com­ plaints drew little sustained notice until 2013, when Halbritter almost single­ handedly vaulted the issue into the head­ lines. Drawing on his tribe’s wealth, he launched Change the Mascot, a campaign of radio ads, polls, opposition research, academic studies, YouTube videos, Twit­ter hashtags, and media interviews.

For once, powerful people seemed to be listening. Marquee sports journalists such as Bob Costas said they would stop using the name, as did more than a dozen news outlets and the editorial board of the Redskins’ hometown paper, The Washington Post; civil­rights groups and sports figures came out against it; 50 U.S. senators signed a letter to NFL Commis­sioner Roger Goodell, who admitted that the league needed to listen to “different perspectives”; and the Patent and Trade­ mark Office revoked six of the team’s registered trademarks, calling them “disparaging.” In October 2013, a mere month after Change the Mascot began, President Obama (who overlapped with Halbritter at Harvard Law, though the two didn’t know each other) told report­ers that if he were the team owner, he’d “think about changing” the name. The controversy even landed on episodes of South Park, The Daily Show, and Jeopardy.

In other words, Snyder—a man who’d made his fortune in marketing—was getting shellacked by a 1,000­ member American Indian tribe in cow country 400 miles to the north.

Halbritter was the sort of adversary the Redskins had never seen before: a leader of an American Indian tribe, with media chops, A­-list political ties (he sat beside Obama at a White House event in 2013 and hosted a golf fund­raiser for John Boehner this August), and a bankroll big enough to keep the NFL’s third­-most-­valuable franchise under a blistering spotlight. Snyder reportedly assembled a crisis­-PR team that in­cluded Ari Fleischer, the former press secretary for President George W. Bush, and Frank Luntz, the influential pollster. Already on board was Lanny Davis, a lobbyist and former special counsel to President Bill Clinton.

When I asked Bruce E. Johansen, a professor in the Native American Studies Program at the University of Nebraska at Omaha, what distinguished Halbritter’s anti-­mascot juggernaut from the long line of earlier efforts, he said: “Money. When you have Halbritter’s wealth, it buys media access. It buys attention.”