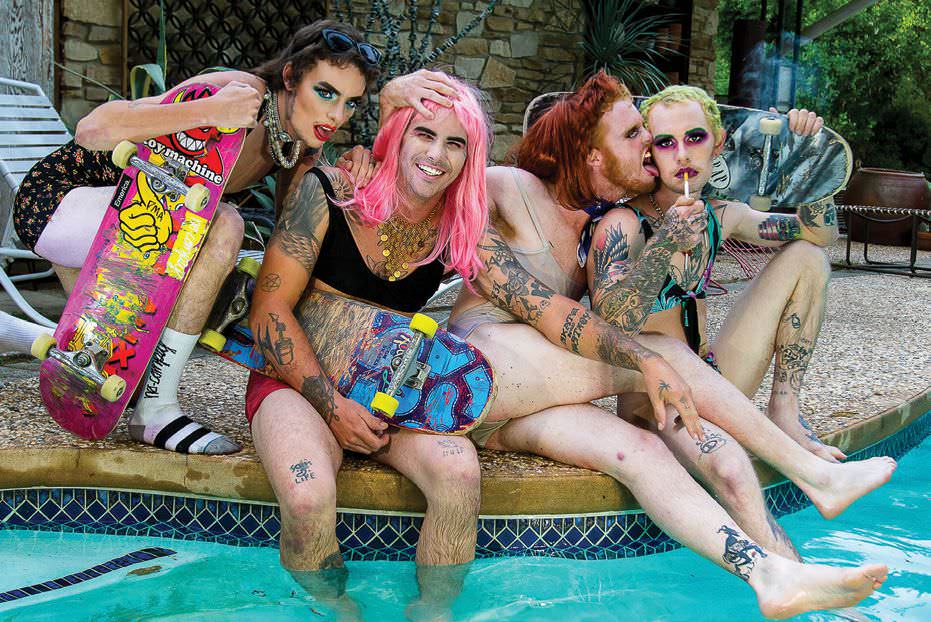 "Punk fuck hardcore skate punk thrash Austin Texas”—eight words that perfectly sum up the eccentric (read: controversial) four-piece outfit, Dress Up. Comprised of vocalist Alex Bond, guitarist Anthony Sardella, bassist Max Fitzgibbon and drummer JoJo Williamson, Dress Up is band of skaters who just happen to cross dress at every performance. Bond explains, “We have fun doing it and that’s exactly why—as skaters—we thought it was cool to eliminate the masculine vibe you would expect from us. Our main message is having fun and doing what you want.” Bond had some time in between shows to talk “Drug Abuse,” the band’s moniker and one of their wildest shows.

I see on your self-titled album the last song is called “Drug Abuse.” What made you want to write a song about that?

It’s about drug abuse in general, about all the people around us that do drugs, but we really wrote it about the manager. He went to rehab. He’s doing great now. You don’t need drugs to have a good time or make good music. A lot of people get caught up and can’t get away. We’re sober and drugs are bad. Don’t do drugs, kids.

How did you decide on your band name?

We were all naked playing music one day and decided we needed to dress up. We also got tired of people in the punk scene all looking the same and not accepting people if they didn’t get with the fashion trends. We wanted to make fun of those people a bit, so we started wearing women’s clothing or other strange things when we played shows as a “fuck you.” It’s actually a great way to express ourselves because that’s what we are thinking all the time: “FUCK YOU.”

Austin seems to have a huge music scene. What were some of your fears starting out in such a musical town?