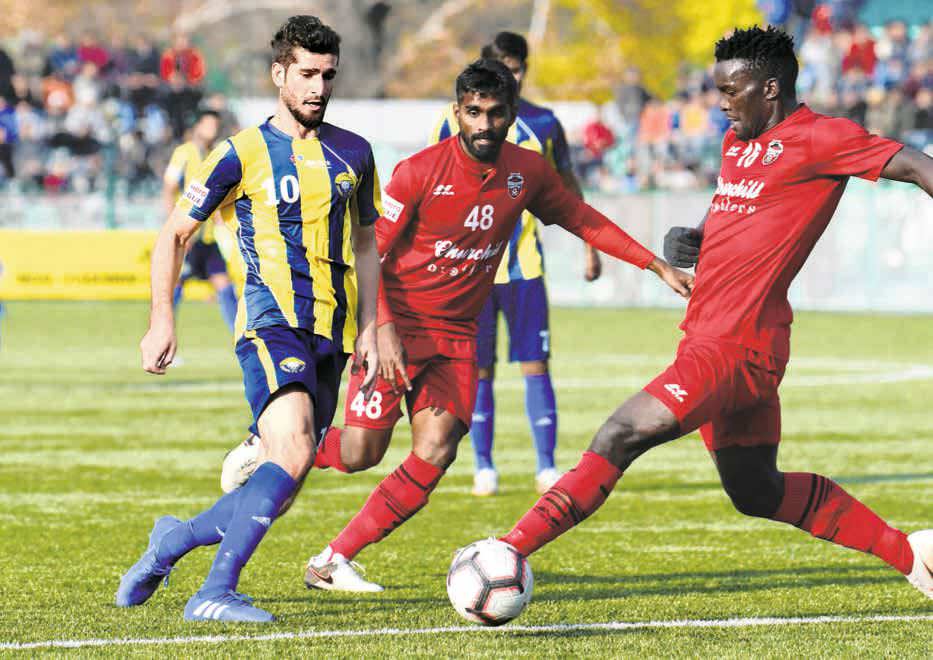 The cold iron­bar seats were, however, no discomfort for the hooting and singing crowd, which cheered every pass, every dribble and every attempt to score a goal.

From a private school premises to the tourism office's courtyard, from a police compound to the floriculture depart­ment’s lawns, all were thrownopenaspark­ ing facilities on November 6 in Jammu and Kashmir’s capital Srinagar. The valley’s football enthusiasts were converging on the Srinagar Tourist Reception Centre’s as­ tro­turf ground to celebrate Real Kashmir’s first home match in the I­League, the premier tournament of Indian football.

The seasoned Churchill Brothers Foot­ ball Club was the opponent and long before the game began, young and old jostled for a free entry into the ground to root for their team. The stands were named after local football veterans like Mehraj­ud­Din Wa­ doo and the late Muhammad Yousuf Dar and there came a point when the State Sports Council decided to stop the entry of fans “for security reasons.” Conservative estimates put the number of spectators at 5,000.

“I decided to take a day off from my school. I wanted to see professional players playing right in front of my eyes. It was happening for real. Being a football enthu­siast, the league means more motivation. I was able to pick up a few tricks of the trade by observing the players. There are more games to come and more to learn and apply in my life,” said Rayees Rather, a Class 12 student of Sri Pratap College.

It was nature’s fury, to be precise the devastating floods of 2014, which made the team’s owner, Shamim Meraj, think of forming a squad of national repute. Nature, indeed, was the first to root for host Real Kashmir as for the first time in nine years, J&Kwitnessed heavy snowfall in the plains, including the capital, Srinagar, on Novem­ ber 3. The day temperature plummeted to 5 degree Celsius and the nights to sub­zero.