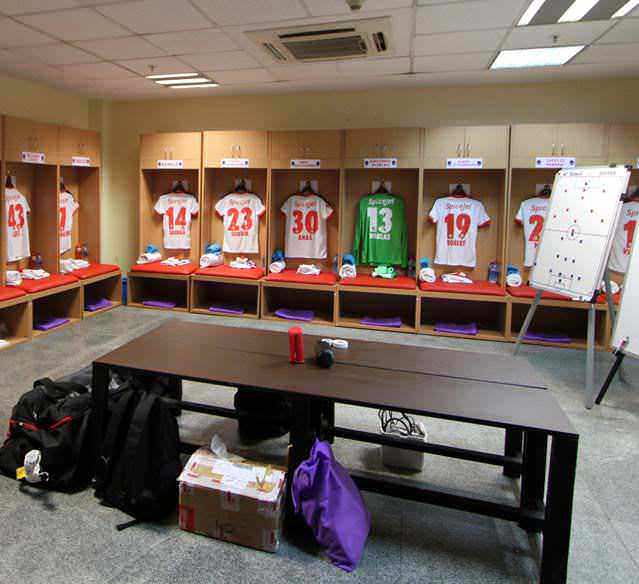 A Sneak Peek Into The Delhi Dynamos Fc Dressing Room, Ahead Of Their Match Against Chennaiyin Fc At The Jawaharlal Nehru Stadium, In New Delhi On October 8.

Global football superstar Cristiano Ronaldo wished Indian Super League side NorthEast United FC “all the best” ahead of the side's first home match of the season. The Portuguese player, who recently surpassed Raul Gonzalez as Real Madrid’s all-time leading scorer, was photographed holding a Real Madrid jersey with a signed message, which was posted on twitter by the club’s official handle.

“To my friend John Abraham, Wish All The Best to you and to NorthEast United,” said the message.

Co-owner of Northeast United FC John Abraham thanked the Los Blancos star for his support. He tweeted the photo of Ronaldo and wrote, “Thank you Cristiano!”

Fans were pleasantly surprised to see the official account of NorthEast United FC tweet the photo. “Arguably the greatest player in the world, @Cristiano is on our side! Lets go #Highlanders! #NEUFC @IndSuperLeague,” the club tweeted.

Despite the support from the Real Madrid great, the Guwahati-based club failed to fire and lost the match. The team are yet to open their account in the points table after three matches.

Ronaldo, who recently won the European Golden Shoe for a record fourth time, had said at the Golden Shoe award ceremony that he was hungry for more. He said, “I am not satisfied, I want more. I’m the only one that has four but I want the fifth and the sixth.”

Taking you closer to the Lions